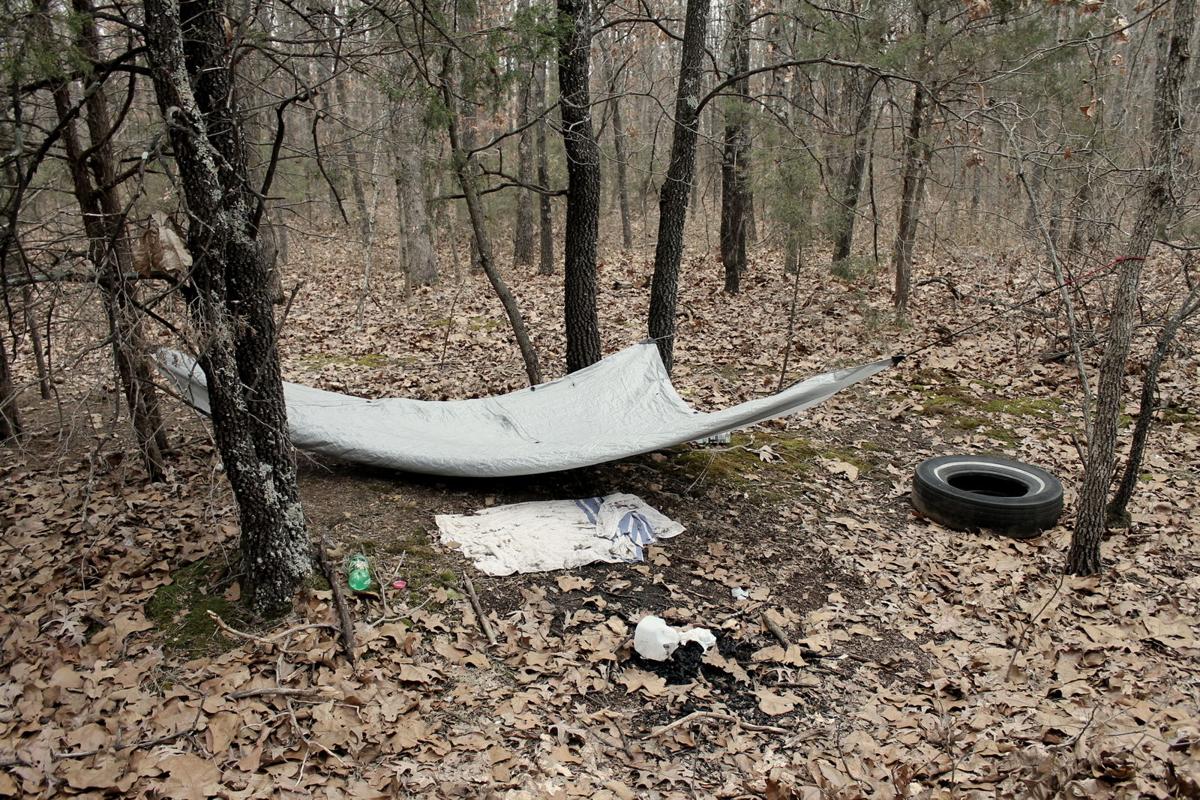 Homeless camps such as this can be found within the woods at the outskirts of Salem. (2015). 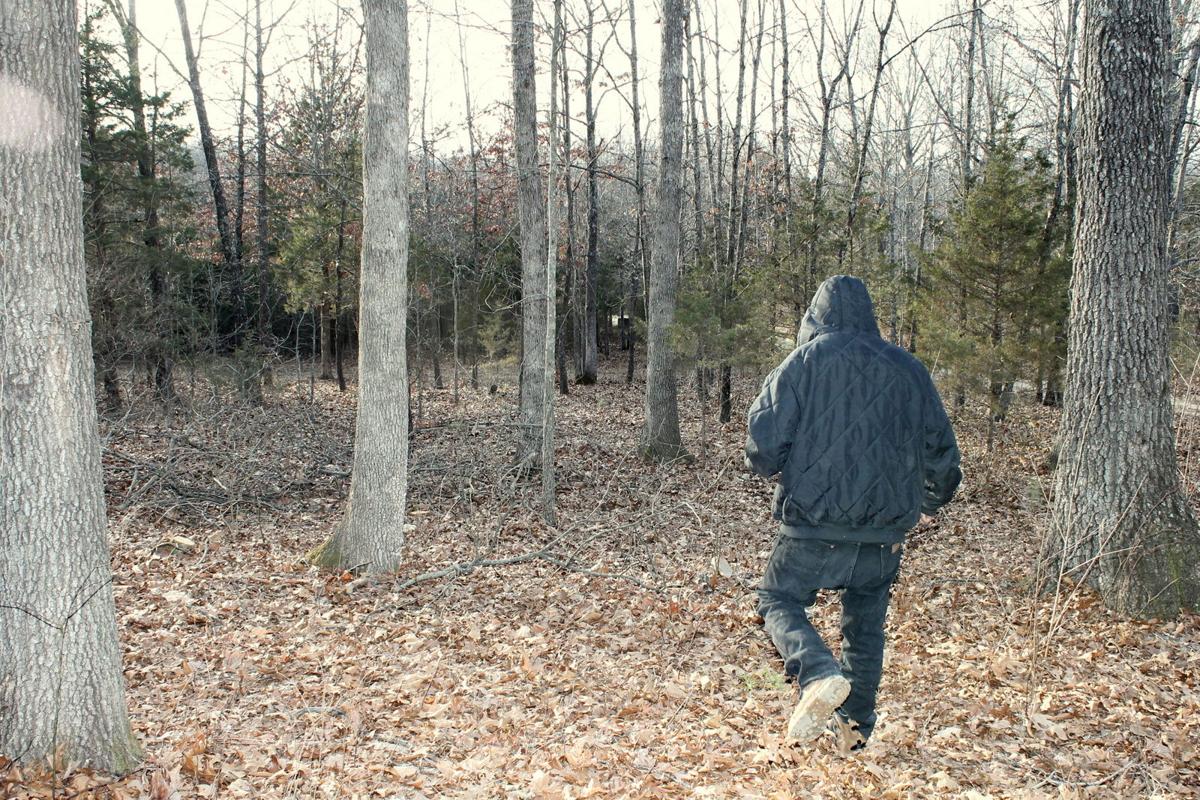 The forests and lakes of Dent County offer the only resources for many people struggling in Dent County. Aaron survives off selling scrap metal and catching fish and turtles from a nearby lake.

Aaron is just one of the 3,600 Dent County residents who are living below the poverty line. He is currently staying in a hand-built junkyard shack made of tarps, tires and tin in rural Dent County.

The US Census Bureau has released its Small Area and Income Poverty Estimate map, a visual measure that shows what percent of residents live below the poverty line county by county. For most of Missouri, the story remains largely the same in concern to income and poverty. Yet for Dent County, and the surrounding areas that make up the Ozarks, there are clearly many stories to be told.

The map is a collage of green, the lighter shades signifying less poverty and the darker spots showing where this issue is at its worst. Located over south central Missouri is a jaded mass of emerald, as stout and constant as the evergreens that roll over the nearby hills. Dent County stands as the gateway to this poverty with 23 percent of residents living below the poverty line. To our north, there is less hardship. Phelps County has 16.4 percent poverty, Pulaski has 15.1, and Osage County comes in at only 10.1. Yet to the southeast, the story is much different. Crawford County had 20.1 percent, Iron 22, Reynolds County has 23.3, Texas County 25.4, and Shannon County has 31.5 percent of its residents living below the poverty line.

“We are seeing a trend of more homeless people in our region. There are more young people doubling up, single parents, and individuals living in cars, campers, or taking shelter in other make-shift structures.”

In viewing the poverty map from a local lens, it would be easy to simply note the discoloration and move on, as if these statistics are as normal to the Ozarks as the mountains immemorial. But what is the reality of 23 percent poverty, and what does this issue look like on the ground as opposed to being neatly displayed on a map? The truth is there are a thousand places to look, and even more stories to tell. For those curious, the end of one county road off Highway 68 is where you can find this problem at its worst. There you will find Aaron, just one of the at least 3,600 of Dent County’s residents living below the poverty line. The county population is nearly 15,000, meaning about one in four people live below the poverty line.

Aaron is 46 years old and grew up in Salem. More than anything, he says he likes to go to the river in warm weather and view wildlife. “I like to watch critters play around in the water,” says Aaron. “My favorites are otters and blue herons. Otters are really goofy and playful, and I think the herons are beautiful.”

On the day of this interview, summer is months away, and far from enjoying the sun. Aaron is just trying to survive the ice and cold of February. Aaron lives with no electricity and no running water in a junkyard shack he hand-built from tires, tin, and tarp.

“I live under blankets,” Aaron says as he trots around his home’s perimeter. “I may not have a lot, but everything here I made myself. I cut my own wood. I stuck down this tarp. I stacked all these tires here to keep the wind out.”

Although it may be hard to believe, Aaron’s situation is far from rare in the Ozarks. “Community leaders should be focused on this problem now more than ever,” says Richardson. “Winter is a hard season and many of these folks are in serious need of help. Many have medical conditions and other health concerns; some are parents and are trying to take care of children.”

Aaron somehow remains upbeat about his current lot and is not afraid to describe how he overcomes the everyday hurdles of food, health and survival.

“Winter is a hard time,” says Aaron. “I’ve been sleeping under about 20 blankets. But winter does have its good points. I can eat more meat because it’s cold outside, and it will keep, just like if I had a freezer. I can’t go hunting because I don’t have guns or bullets, but I can fish. That’s a private lake right there,” Aaron says as he points to a pond in the distance. “I can fish in it. I can bathe in it, but I do have to take bird baths in this weather. And whenever I see a turtle I snatch’em up. You gotta eat them quick though, they go bad fast.”

Aaron has managed to scrape by for more than a year near a make-shift junkyard, but it has not been easy. When asked what he needs most Aaron says he would like extra candles and blankets. A neighbor named Joe is able to provide a little support such as regular drinking water, but his circumstances, like many along the road, are not much better than Aaron’s. Joe has no bathroom, and after more than a dozen years, only got his running water last summer when he and Aaron personally dug a trench over 700 feet to lay a connecting pipe.

As for their personal circumstances, Aaron and Joe are content to leave troubles in the past. Although they both hint to fallout within the family and past run-ins with the law, they are guarded when it comes to history. Both are fathers, and both carry a tremendous amount of hurt and anguish in their being. But all they have now are each other, and the hollow in which they live. And far from comfort, the pines only offer silence.

Ten Hochman: That catch! Breaking down the importance of Harrison Bader’s snag for the Cardinals

“I don’t always know how people end up in the situations they do, but I do know we have to address it,” says Richardson. “I try to be objective. We often ask ourselves whether poverty is due to out-of-control circumstances or people’s poor decisions. Regardless, in our communities we can’t say it’s not our problem. A firefighter doesn’t walk away from a house fire and ignore the problem because someone was smoking in bed. We have to address poverty now because eventually this will come to impact other factors in our society.”

Meanwhile, huddled around an old wood stove, Aaron and Joe share a couple beers they bought during their last trip into town.

“That’s coleslaw right there,” Joe says as he kicks a bucket full of cans and scrap metal, indicating the source of the beer money. Together they shoot the breeze and share as many laughs as possible. When prodded to comment on perhaps seeking help, the atmosphere turns cold and cynical.

“This country threw blue-collar guys like us overboard years ago,” Joe says. “They have no use for us anymore. Well, if you break the weakest link, the chain will be broken, and this country is going to find out what it is like to fall.”

Aaron’s already had enough of the discussion, saying “around here you can get help if you go to them, and look the way they want you to, but nobody goes out to look for the people that need help and finds them.”

Says Richardson: “I can describe the mindset of people living in poverty with one word, ‘fear.’ … When someone has no hope it’s like carrying deadweight, and they’re not even capable of helping themselves. It’s like a paramedic responding to an unconscious person. You can’t expect them to let the medic know what happened, or to help the situation. But once you give people hope, they wake up and their whole outlook changes on the future. Then it’s that much easier to begin helping people out of poverty.”

Aaron and Joe are just a couple of the people in Dent County struggling to survive the winter. Although they may be out of sight in our everyday existence, this problem is far closer and more pervasive than most realize.

Less than a hundred yards into the woods at the outskirts of Salem is a homeless camp. Here, at hope’s end, you can find many of the newest within poverty’s ranks. The trail through the trees is sadly well walked and worn. If not for the trash and shambled campfires one could swear to being on the Ozark Trail. But the traffic from the highway can always be heard, and the lights from a nearby supermarket spotted through the intertwined branches.

This is where attention is most needed, yet the forest is quiet. The citizens of this camp are not home, but signs of life are all around. Burnt logs, tarps stretched between trees, rocks and tires arranged for communal sitting. More than anything else there is alcohol here, cans and bottles of it, both of glass and plastic. The labels of many are worn, but the color of others offensively bright and new. Some rum bottles are still sealed, but the aroma of others reveals they are filled with water, more precious here than any place else in the county. The freshest thing here is a family sized bag of Reese’s Peanut Butter Cups. Half eaten, its contents no doubt rationed out to bring joy to as many days as possible.

The walk back to civilization from this camp is as transfixed as any you will find. Emerging from the woods where the homeless live you find yourself in a pseudo-suburban setting. The residents here likely have no idea of the scene just a touchdown run away from their dinner tables. There are houses, trucks full of tools, and ornamented porches.

In Dent County and the Ozarks, there are different worlds and struggles, and tarps are being used as homes. Poverty continues to endure.

Readers who would like to make donations towards the needy in the Dent County area can contact the Lifeway Center at food@lifewaycenter.com

Struggling with Poverty: Community teamwork, caring are part of the answer

There are over 3,600 people living under the poverty line in Dent County, and many of them will cycle through the Sheperd’s Nook Food Pantry a…