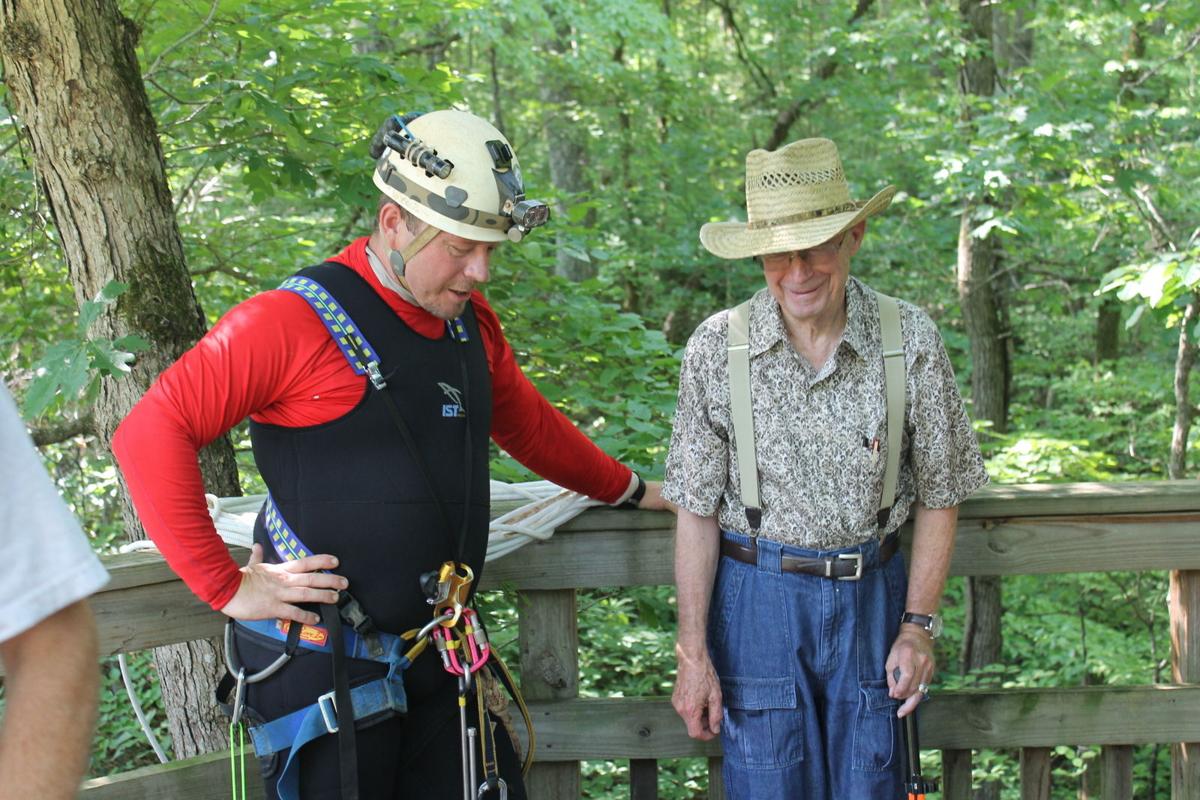 Among the observers of the operation June 25 was Jerry Vineyard, one of the original researchers who first explored Devil’s Well in the 1950s. Vineyard shared many stories and a few tips on how to enter the cave with Tony Schmitt of the Cave Research Foundation. 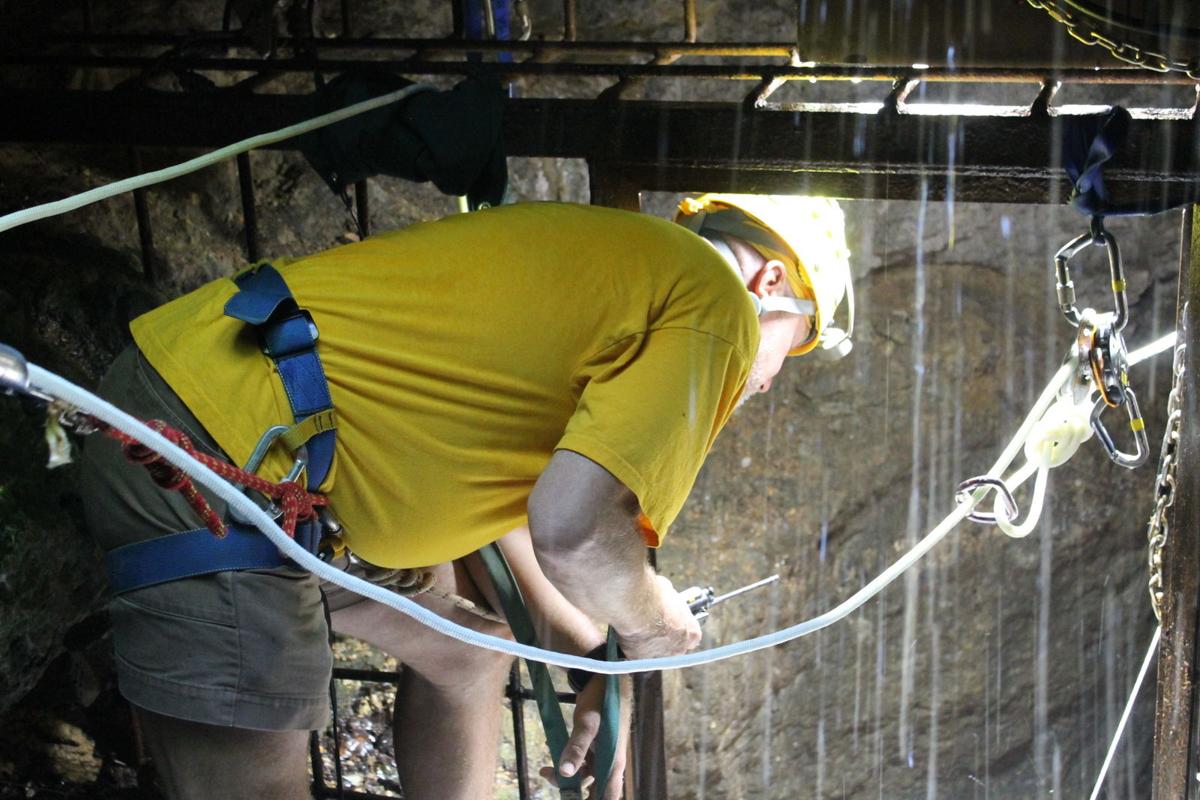 Rick Haley was on point for the Cave Research Foundation at the Devil's Well observation platform. The team was unable to communicate via radio once the explorers entered the cave, so only nonverbal communication cold be used. 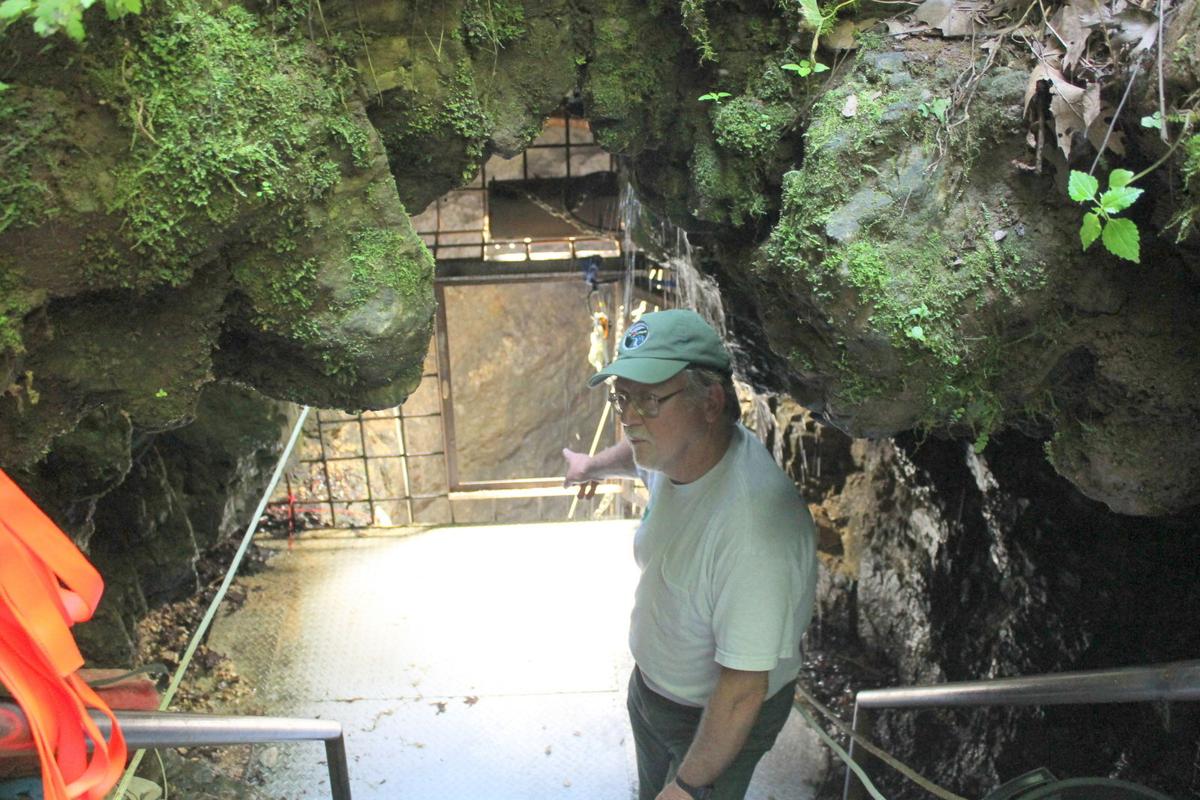 The Operations Manager at Devil's Well for the Cave Research Foundation was Scott House. 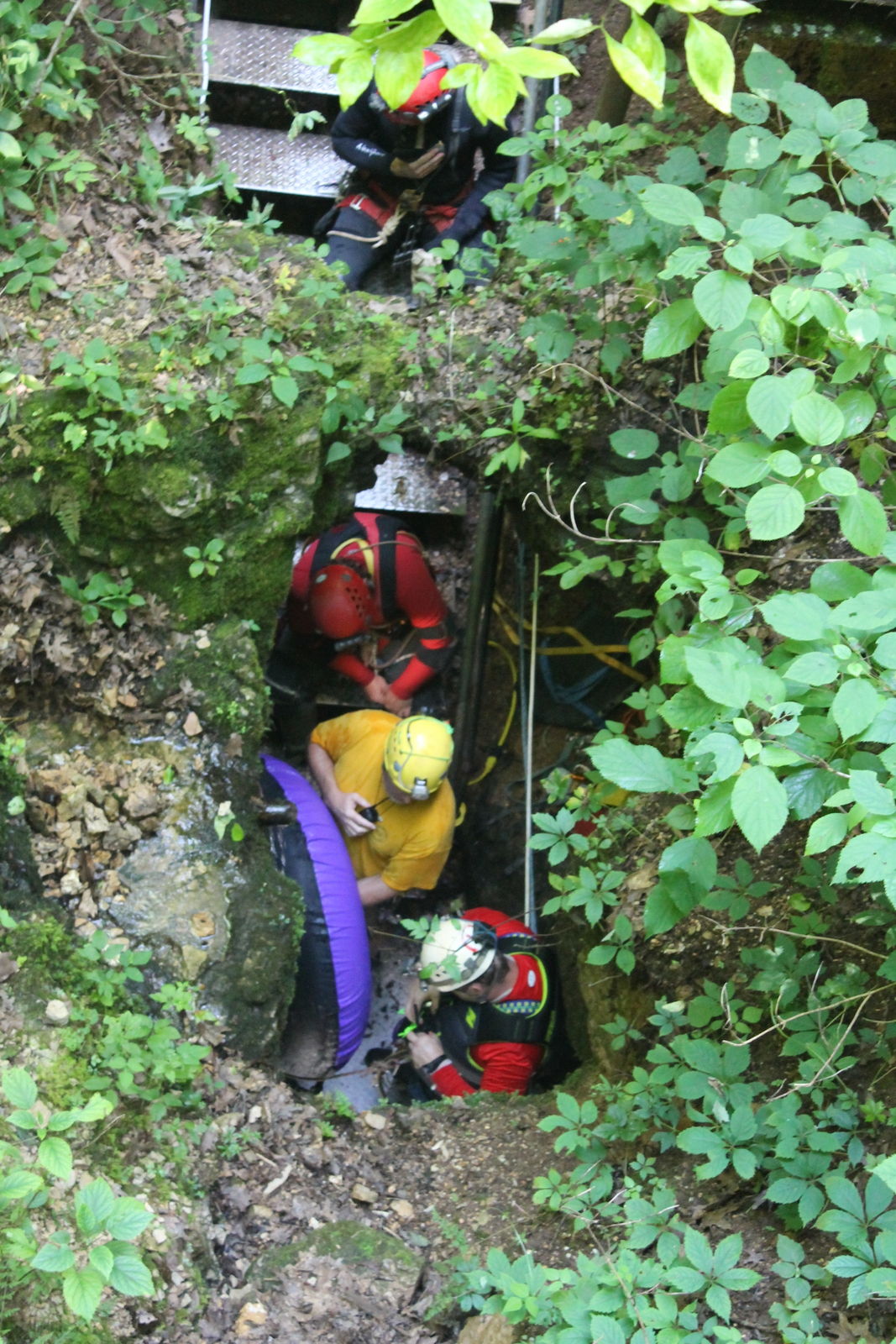 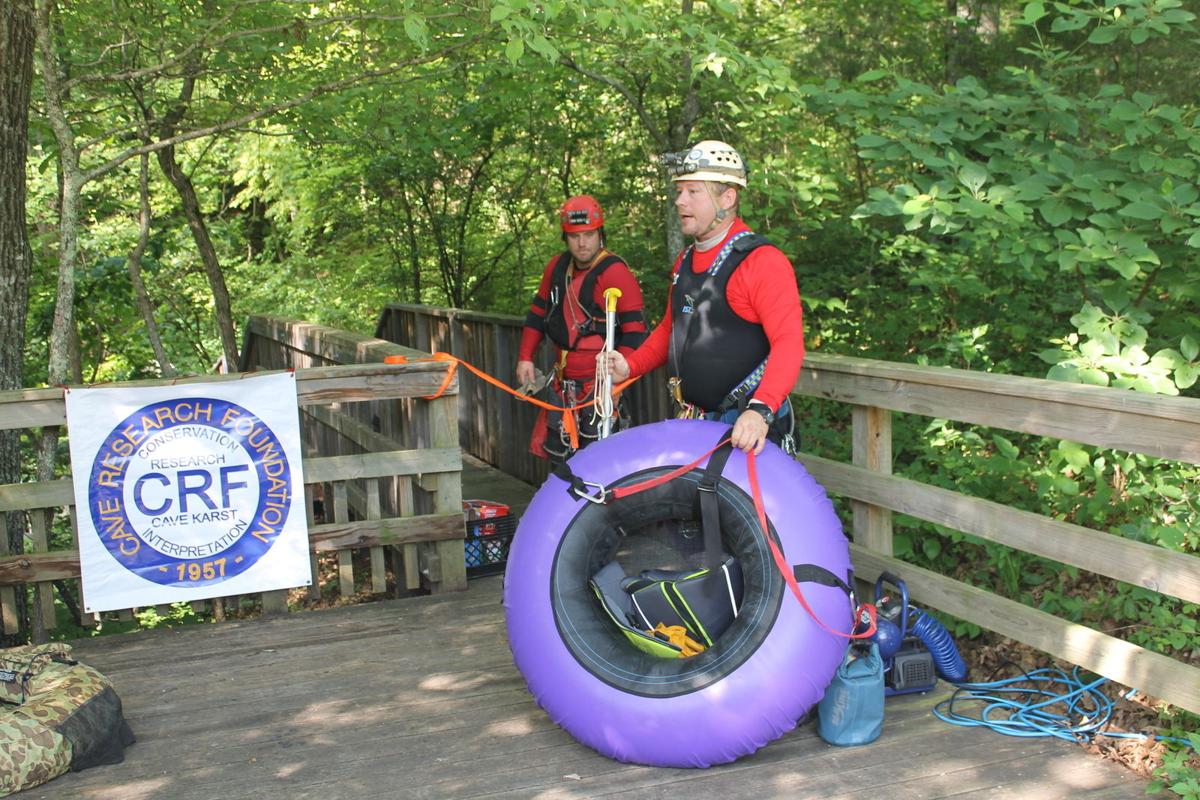 Tony Schmitt was the first explorer to enter Devil's Well June 25. He had to descend down a rope 100 feet and land in an inner tube at the bottom. Photographed is Schmitt holding the said inner tube, and Dan Lamping of the Cave Research Foundation. 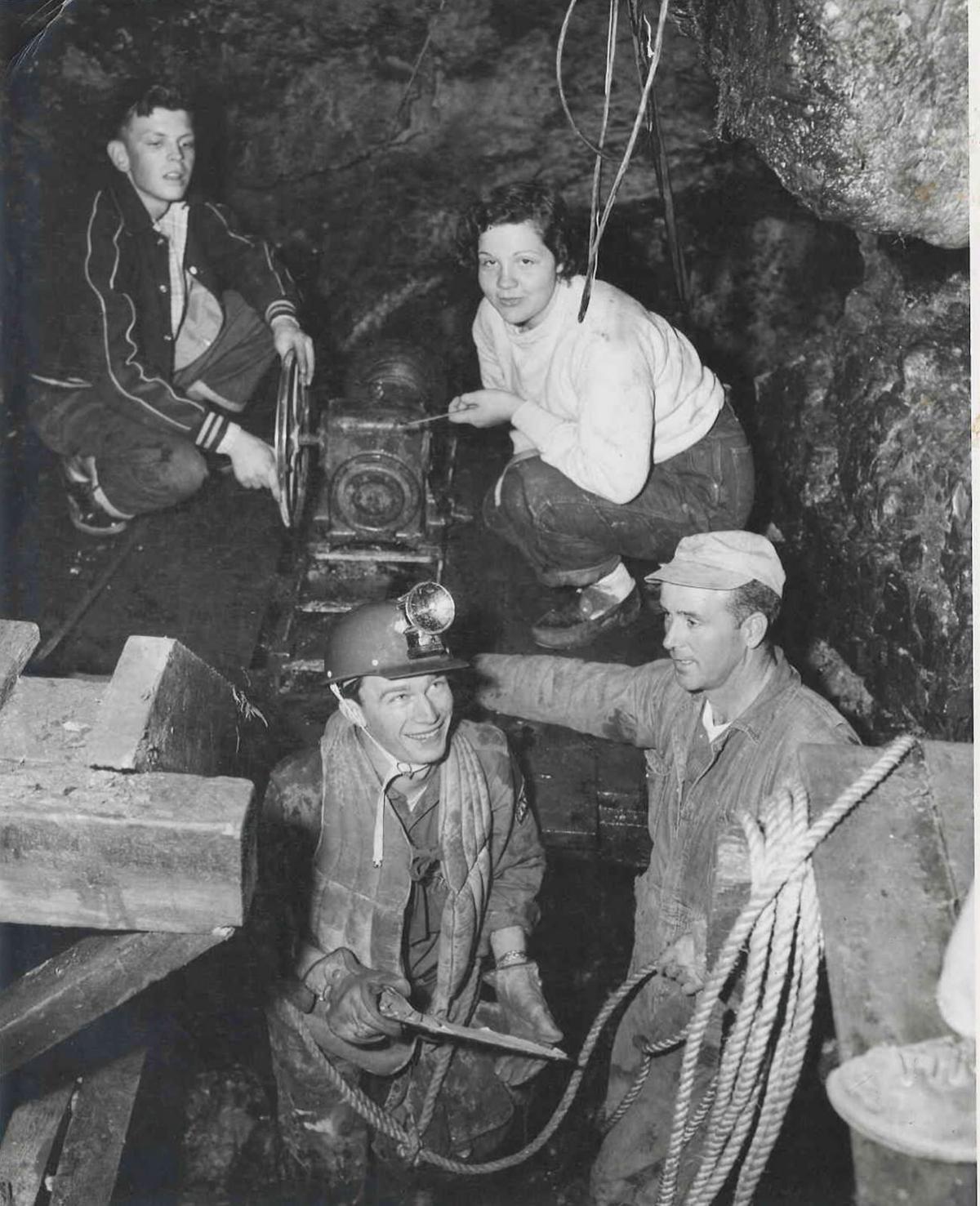 Jerry Vinyard exploring Devil's Well in the 1950s with his exploration crew. 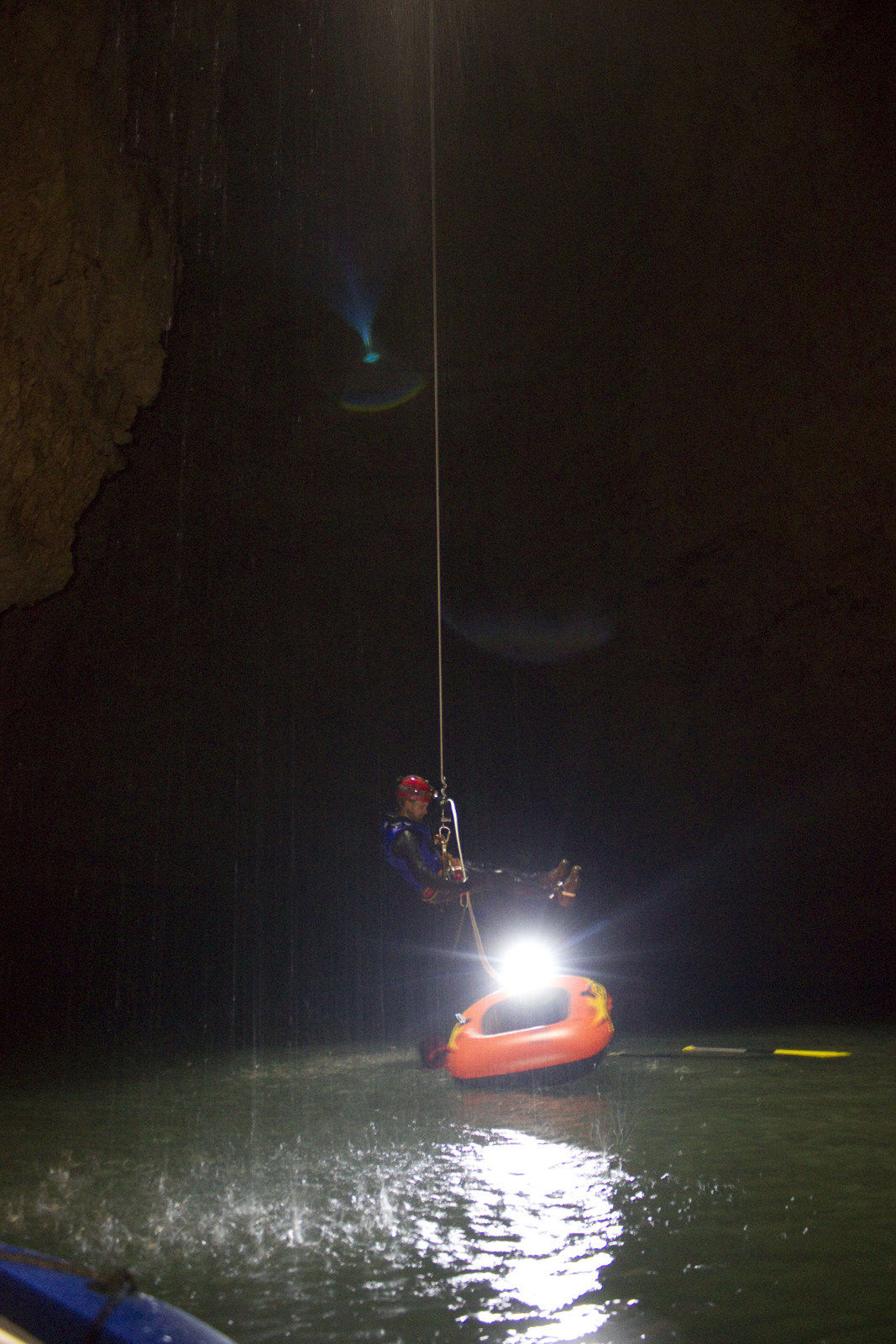 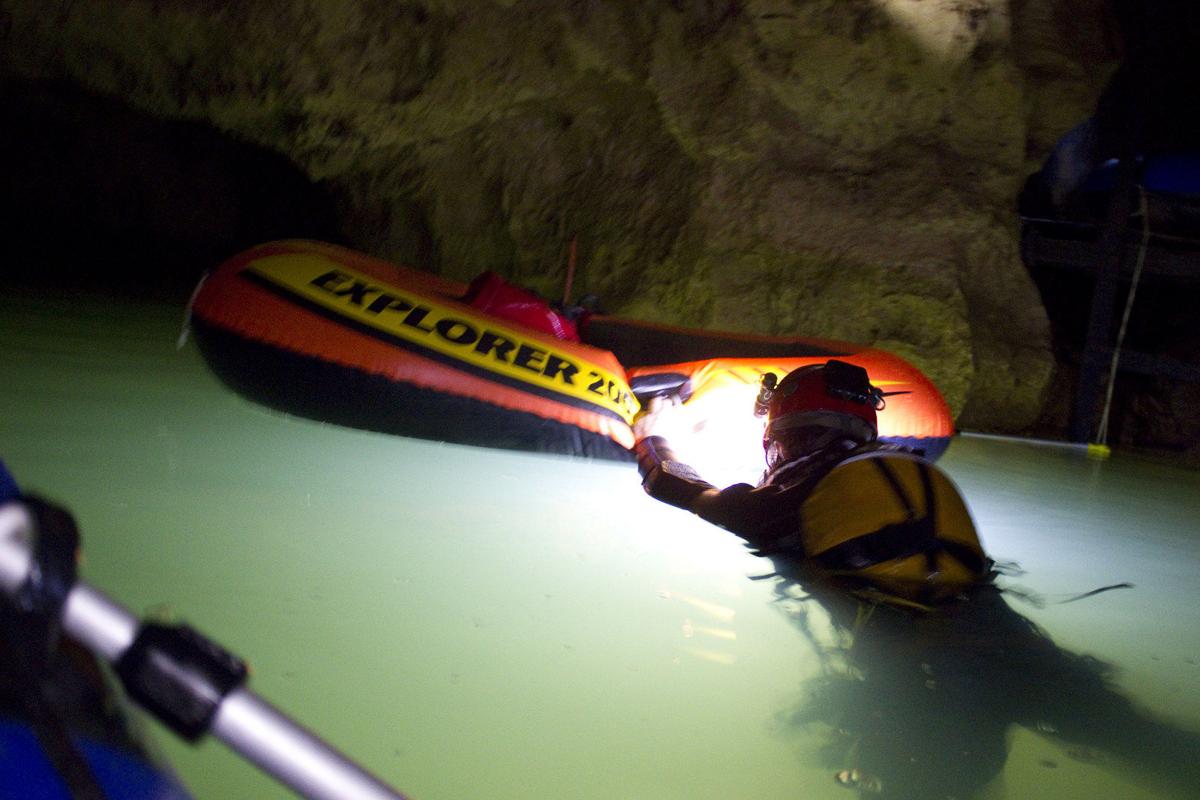 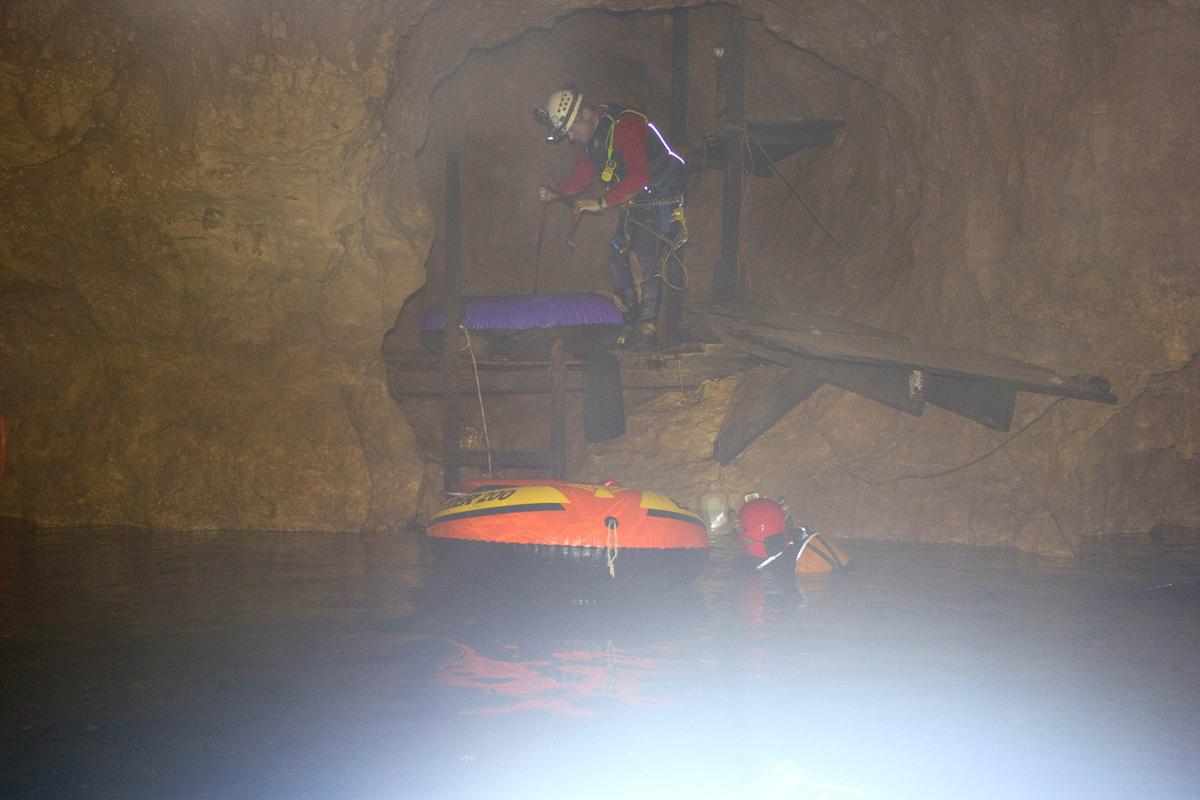 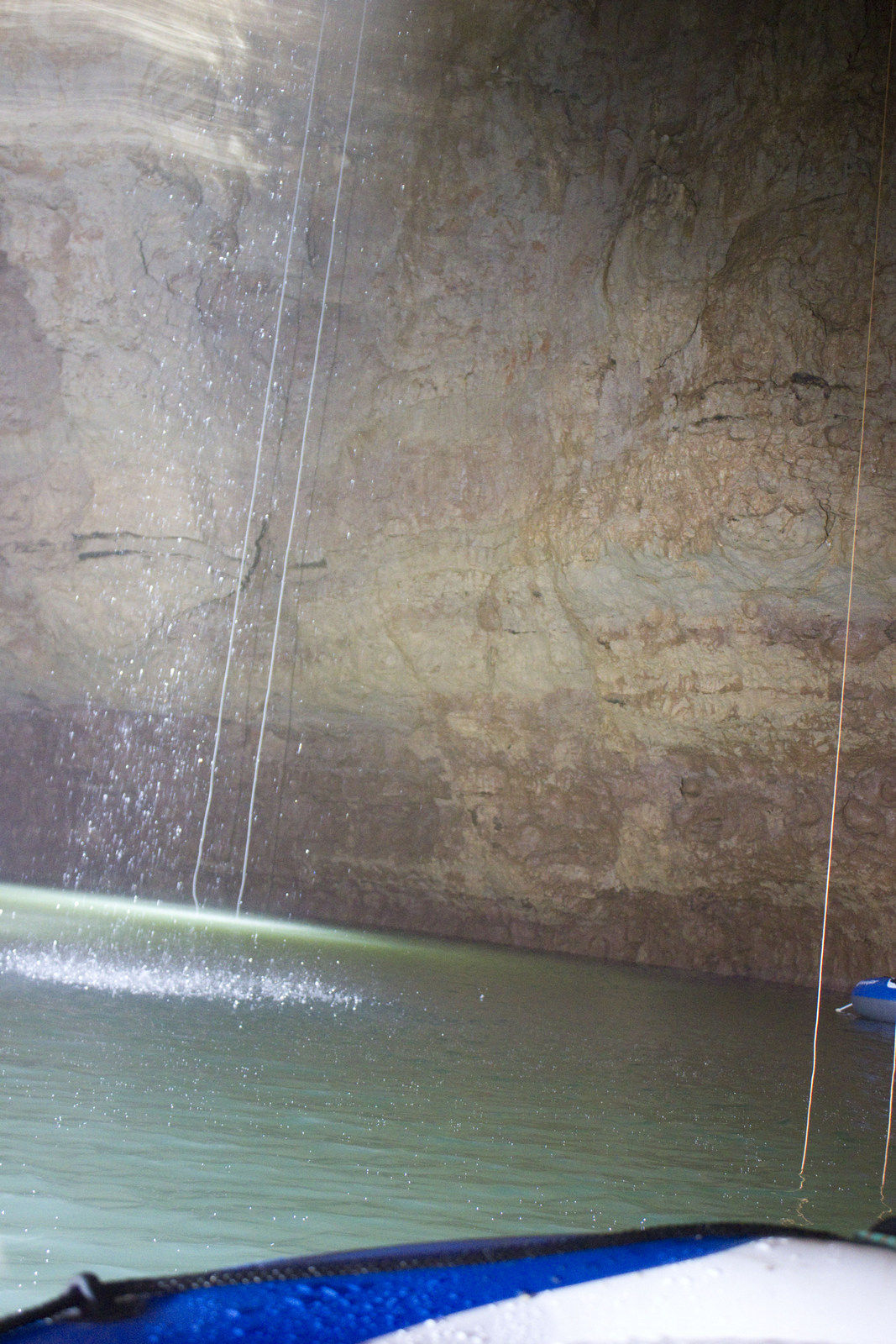 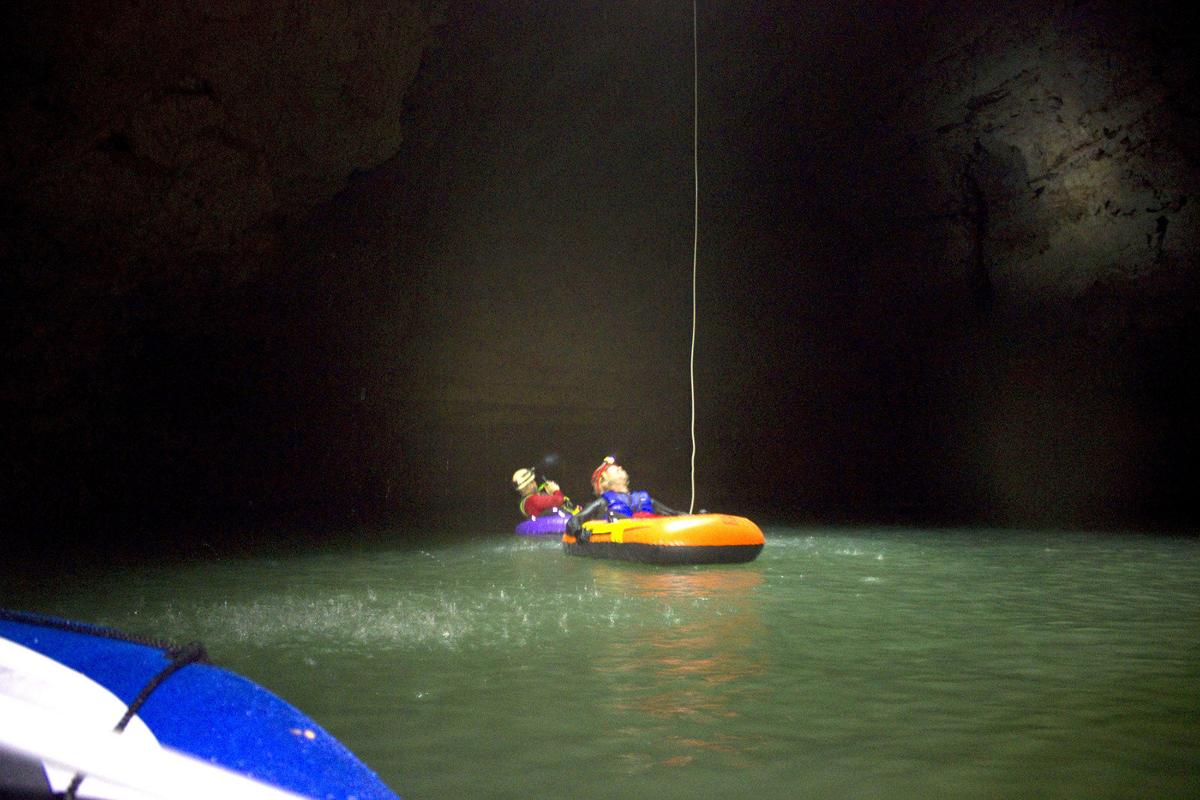 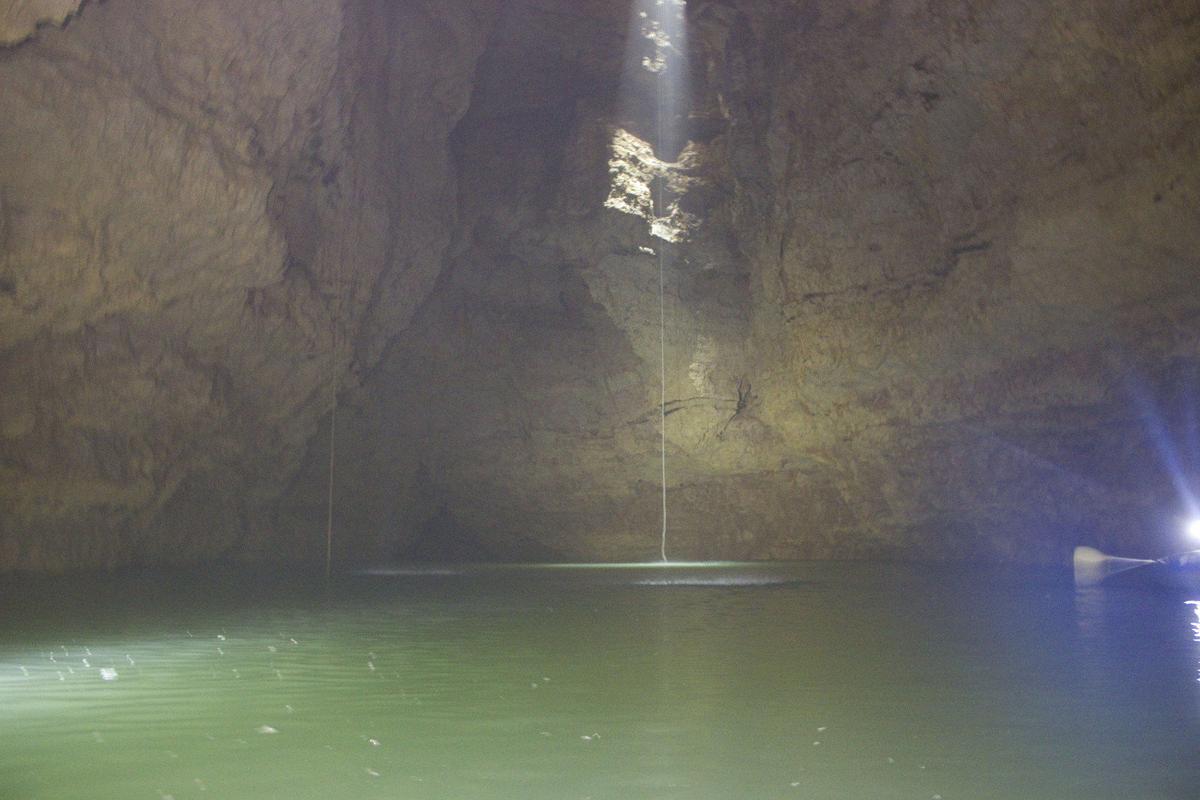 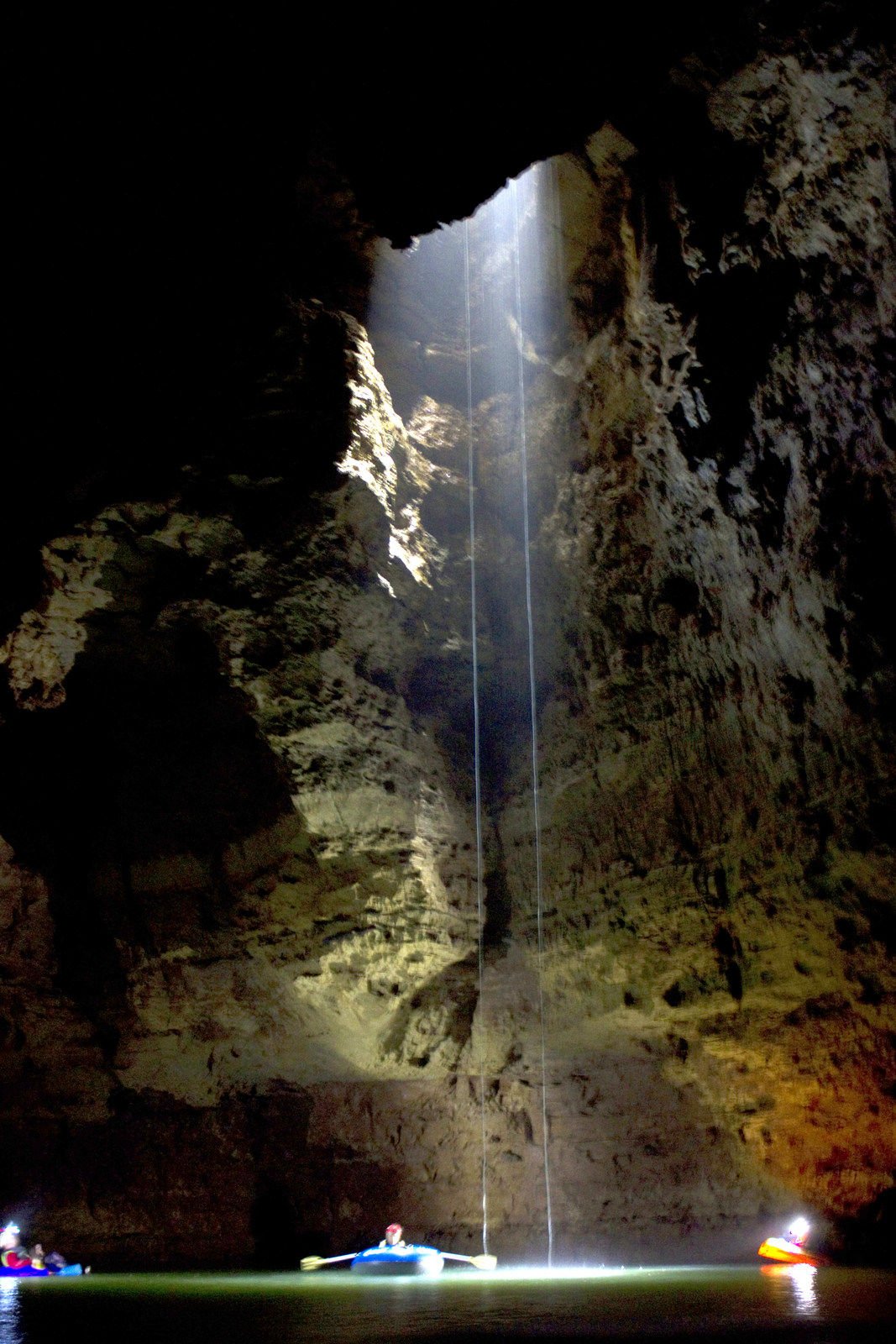 Explorers with the Cave Research Foundation entered the massive underground chamber beneath Devil’s Well for the first time in 30 years June 25. The chamber is large enough to fit a navy destroyer and it home to some of the Ozarks most unique lifeforms. 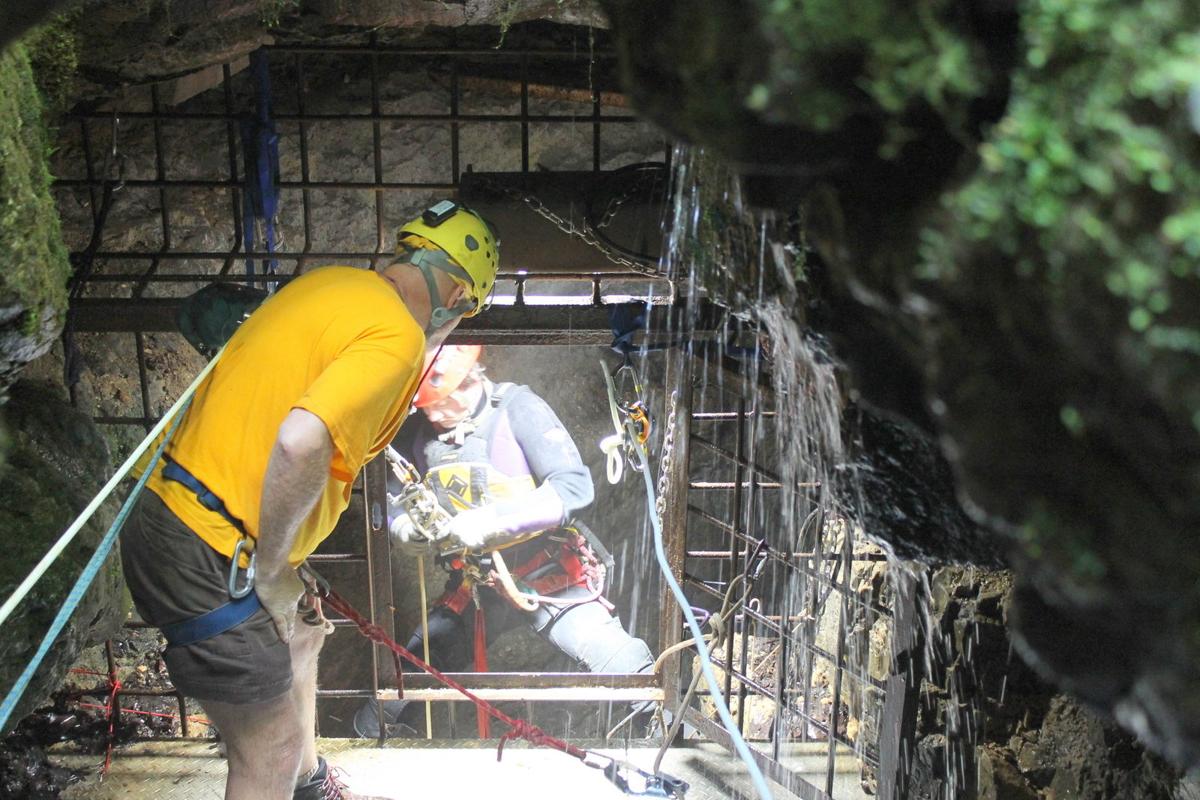 Rick Haley (left) assists Mike Tennant as he prepares to climb down the 100 foot descent into Devil’s Well. Much preparation was needed to successfully enter the cave, as entering it requires rope rappelling through a waterfall and landing in an inflatable raft at the bottom.

Cave explorers with the Cave Research Foundation entered Devil’s Well June 25 at the invitation of the National Park Service to conduct a proof of concept exploration of the site, as well as to monitor the cave’s vast underground chamber.

It was the first time in over 30 years that human eyes bore witness to the interior of Devil’s Well and braved the various hazards to entering its subterranean chasm.

Devil’s Well is a unique karst formation in Shannon County off Highway KK and a feature of the Ozark National Scenic Riverways. It was formed thousands of years ago when a sinkhole partially collapsed, creating a narrow 100 foot deep shaft straight down into the earth.

“I don’t know if you could fit a battleship down there (which is how Devil’s Well has been described through the years) but you could definitely fit a destroyer, or probably a submarine, too,” says Scott House, the Operations Manager onsite for the Cave Research Foundation.

The goal of the exploration was to demonstrate that regular monitoring on Devil’s Well can take place using modern caving techniques through a proof of concept operation.

Devil’s Well is already known to be home to such rare creatures as the Salem Cave Crayfish and Southern Cave Fish, according to House. It is also suspected the cavern may host Pipistrelle Bats and Grotto Salamanders. Enabling more monitoring will help allow for a better understanding of the fragile cave ecosystem and aid in local conservations efforts.

“We are very excited to host this operation so the Cave Research Foundation can bring their technical expertise to monitor Devil’s Well,” says Dena Matteson, public information officer with the Ozark National Scenic Riverways. “We look forward to future opportunities to gain a better understanding of the site through additional monitoring.”

The cavers sent to complete the research are some of the best in the entire country.

“We have the A-Team here that is for sure. You could not find seven more qualified people if you tried," House said of the exploration team.

The seven members of the team have a combined 150 years of experience caving in karst systems around the world.

They needed every bit of courage and knowhow to enter into Devil’s Well. The team was divided into two groups, Mark Andrich and Rick Haley stayed on the surface to administer the drop zone and monitor safety, while Dan Lamping, Tony Schmitt, Robert Lerch, Joe Sikorski and Mike Tennant all descended into Devil’s Well.

There were many logistical hurdles that had to be overcome before entering the cave.

First and foremost was the 100-foot drop straight down.

The cavers used a single rope technique to repel into Devil’s Well. This technique had never before been used to traverse the Devil’s Well shaft. When Bob Wallace originally entered the cave in 1954 he was lowered in by his brother Bill using a hand-wench while sitting in a bosun’s chair.

Exasperating the climb, however, is that descending the rope had to be done through a chilled waterfall, potentially numbing hands and making grips slick.

Several waterfalls feed the hydrologic system of Devil’s Well, some as high as 75 feet. The water from the cave works its way through underground passages and emerges at Cave Spring on the Current River.

The information panels at Devils Well warn that anyone falling unprepared into the lake’s waters will die within minutes of hypothermia and a lack of surface to crawl on.

First, rappellers placed mountain-climbing clips into the ropes. A water tub was placed under the waterfall to briefly halt the flow. Inflatable rafts into which the team members could land were placed at the end of the rope.

Spurned on ‘Bachelorette,’ Lake Saint Louis resident will be ‘The Bachelor’

Tony Schmitt was the first down and reports the maneuver was easier said than done.

“There was a really strong current in the water which we didn’t expect,” Schmitt said upon returning to the surface. “As soon as I got in the raft I went about 40 feet instantly and had to start paddling. It was scary for a minute because no one has been down there in so long, you know, it’s dark and you don’t know what’s in there.”

In spite of the challenges in entering the cave, all five members successfully rappelled into the rafts without incident. The only hitch came when a pale had to be lowered in so the rafts could have water from the waterfall bucketed out of them.

A rendezvous time was set for the underground team to return to the ropes. During that time of radio silence, the surface team could only wait and hope the echoes bellowing from the earth were those of joy and not terror.

Among those who watched the operation was Jerry Vineyard, 80, one of the original researchers who studied the cave in the 1950s and discovered the connection between Cave Spring and Devil’s Well.

“If I was a little bit younger I would probably be going in today,” Vineyard said as he watched the team members climb into the giant hole.

Vineyard was the only person onsite who had previously been in Devil’s Well. While the cavers were busy at work underground, Vineyard shed light into how the cave earned its frightening name.

“There is a certain amount of terror associated with it,” Vineyard says. “It’s cold, windy, dark, noisy… and if you fell in you wouldn’t get out.”

Vineyard was also quick to say that the cave was just as beautiful as it was frightening.

“We saw strange and wondrous things,” Vineyard said, quoting those who discovered King Tut’s tomb in 1922. “We planned for it for some time. It’s breath-taking. Every cave is different. This one is a big lake at the bottom of a hole, which is very unique. I can still remember the amazement of seeing the roof from inside. It was an absolutely overwhelming experience.”

Vineyard also joked he didn’t have the luxury of a staging platform or inflatable rafts when he went in, but instead lowered heavy aluminum canoes to the bottom without knowing whether his team would ever be able to pull them out again. All he had to light the way were the flames of a carbide lamp as well.

After several hours of exploring June 25, the five cavers climbed the ropes to the surface with a fresh collection of photographs and a once-in-a-lifetime experience.

“The operation went perfectly,” says House. “It went as good as we could imagine and better. By proving this technique and getting the bugs worked out, we can enable further monitoring.”

“They were very excited and pumped, although the rest of us probably would not have found it too enjoyable.”

Now that this exploration technique has been proven, additional trips can take place to better document the underground wildlife of Devil’s Well and further study one of the Ozark’s most unique and mysterious caves.