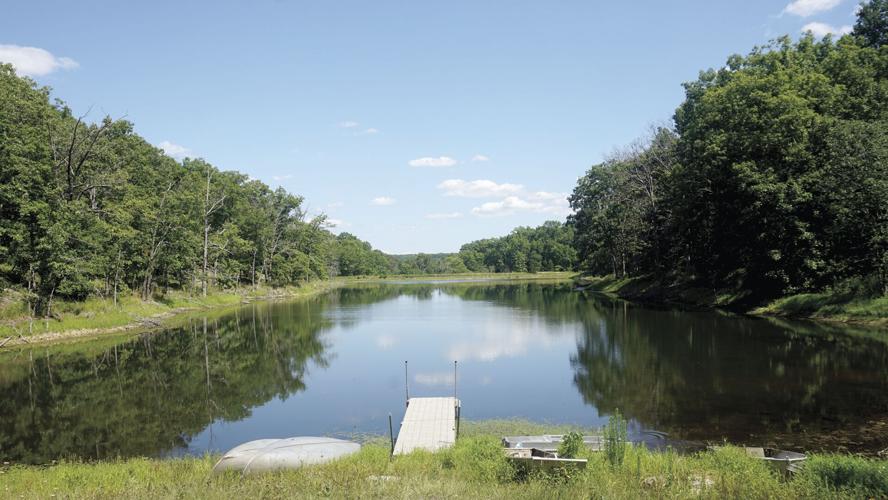 There is a small crystalline lake on the Marian Acres property seven miles northeast of Salem. 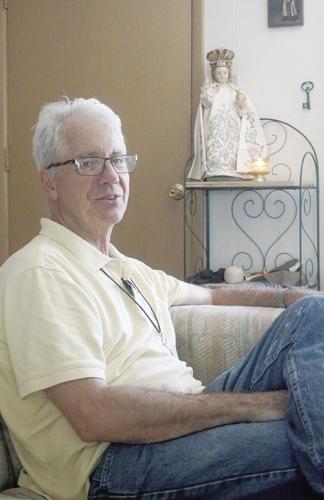 Patrick Stewart, a Catholic layman who has embraced a vow of chastity and poverty and who helps take care of the Madonna House at Marian Acres in Dent County. 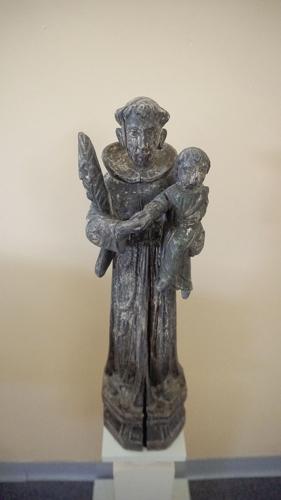 A statuette of St. Anthony, who is an important figure in Eastern Orthodox tradition. Despite being an official retreat of the Roman Catholic Church, Madonna House’s foundress’ Russian heritage is responsible for a blend of both western and eastern Church traditions. 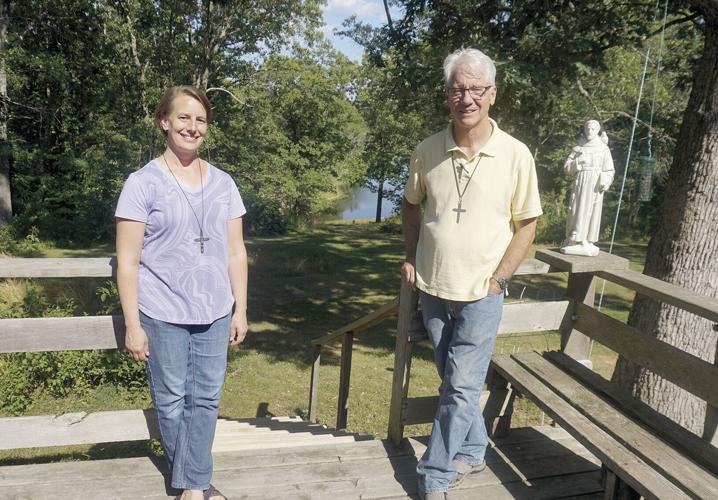 Trina Stitak and Patrick Stewart, Catholic laypeople who have dedicated their lives to Christ, having taken vows of poverty and chastity. 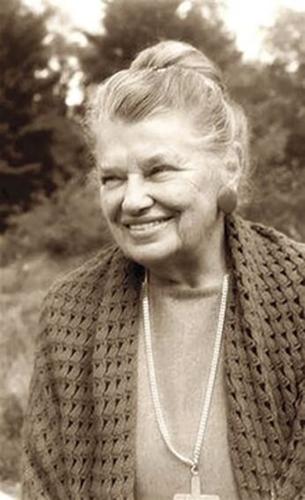 There is a small crystalline lake on the Marian Acres property seven miles northeast of Salem.

Patrick Stewart, a Catholic layman who has embraced a vow of chastity and poverty and who helps take care of the Madonna House at Marian Acres in Dent County.

A statuette of St. Anthony, who is an important figure in Eastern Orthodox tradition. Despite being an official retreat of the Roman Catholic Church, Madonna House’s foundress’ Russian heritage is responsible for a blend of both western and eastern Church traditions.

Trina Stitak and Patrick Stewart, Catholic laypeople who have dedicated their lives to Christ, having taken vows of poverty and chastity.

The karstic, forested hills known as the Ozark Mountain range have both the blessing and the burden of being simultaneously famous and obscure. This land has that much in common with mankind's search for meaning, purpose, and place.

Troubled times of discord and disharmony can upset and worry the heart, mind and soul—the harshness and sweet beauty of the hills can serve as a balm.

The rugged landscape—every ravine, crag, sinkhole, cave, bald-knob, thicket and glade have their own secrets to keep or reveal. The crystalline waters of this landscape whisper answers in a language older than any known to man. Though, many might argue that it is not the waters or the land doing the whispering, but rather their Creator.

The weather can be harsh and unforgiving—with months of drought or rain storms that flood and destroy or winters with weather so unpredictable that it leaves the mind searching through a pattern so complex that it remains out of reach.

And yet, there are those moments….

Moments when the weather is just right and the sun shines just the right way or the moon gleams longingly over these hills and every person’s mind, whether they know it or not, can get a taste of the sublime when at first they notice only something pretty.

It’s here that the Madonna House Apostolate at Marian Acres in Dent County located seven miles northwest of Salem is a place cultivated to help people discover meaning, purpose, and place—a spiritual harmony based on freedom and unity in love.

The story of the Madonna House takes place across at least four continents and touches on events spanning more than a century, and has already touched the lives of thousands.

Marian Acres is a satellite of the Madonna House Apostolate in Combermere, Ontario founded 75 years ago by Catherine Doherty, a woman who led a labyrinthian life with twists and turns that could have been ripped from the pages of Tolstoy or Dostoevsky and is this story’s first character.

She was born on a train into an aristocratic Russian family on Aug. 15, 1896 in Nizhny-Novgorod, Russia and was baptized into the Eastern Orthodox Church the following day as Ekaterina Fyodorovna Kolyschkine.

She spent her childhood, from the age of six, attending a Catholic school in Alexandria, Egypt, where her father was posted until her family returned to Russia in 1910.

At age 15, she married her cousin, Boris de Hueck, an engineer whose work later took him to the front lines during WWI, where Doherty also served as a nurse.

She and her husband fled to England after narrowly escaping Bolshevik revolutionaries—much of their family died in the tumult. It was during this time that she promised God her absolute devotion, though it would be several years before she took intentional steps toward keeping her promise.

From England, she and her husband moved to Canada where their son George was later born. Poverty, illness and various other struggles slowly fractured and then shattered their marriage—years later, the Catholic Church annulled their marriage.

Doherty went on to accrue wealth as a successful lecturer across North America, but her heart was still troubled.

On Oct. 15, 1930, she renewed the promise she made to God and sold all of her belongings. After receiving the blessing of an Archbishop and making arrangements to care of her son, she set out to live a life of poverty in the slums of Toronto.

Over the coming years, Doherty was involved in several ministries and overcame many challenges as she transitioned from being a survivor of a violent revolution to being a standard bearer for a different sort of revolution—-one of unity and love.

Doherty later became a key player in the Civil Rights Movement, opening the Harlem Friendship House in 1938, she also traveled across the United States decrying racial discrimination against Blacks until she left in 1947 and founded the Madonna House Apostolate in Ontario. During this era of her life, she met and married Eddie Doherty in 1943, whose name she bore the rest of her life. She and her husband, journalist and academy award nominated screenwriter, launched a religious newspaper called Restoration, which continues to be published today.

The Madonna House, as it is today, was a place where both laypeople and priests could live in quiet solitude devoted to Christ.

Less than three years later, the people living at the Madonna House in Combermere voted to embrace a permanent vocation with vows of poverty, chastity and obedience to God.

The following year, Catherine and Eddie took a promise of chastity and lived celibate lives thereafter.

By 1960, Doherty’s community received official approval from the Catholic Church. People who choose to make the Madonna House their permanent home live lives they call, the “Life of Nazareth”. They beg for what they need and give the surplus to others.

Her apostolate includes many different parts of life—farming, carpentry, cooking, laundry, philosophy, theology, science and the fine arts to name a few.

At the invitation of bishops, they opened houses in rural areas and cities in North and South America, Europe, Russia, Africa, and the West Indies.

In a letter that Doherty wrote to one of those houses, she said.

“If we implement this law of love, if we clothe it with our flesh, we shall become a light to the world,” she said, “for the essence of our Apostolate is love—love for God poured out abundantly for others.”

Doherty introduced two Eastern Orthodox concepts to the western world: poustinia, which means a place where a person meets God through solitude, prayer and fasting, and sobornost, which means deep unity of heart and mind in the Holy Trinity that’s beyond purely human capacity.

Doherty died on December 14, 1985, after a long illness. The legacy she left can be both tangibly witnessed and intangibly felt in the lives of the hundreds of members and foundations she created around the world.

The Madonna House at Marian Acres in Dent County is one of those rural places mentioned above.

Here we meet our next two characters who each devoted themselves to God according to the way of life that Doherty modeled.

More than 30 years ago, they settled on the property now known as Marian Acres, embracing lives of pousitinia and sobornost. Both were well-loved friends of many in the area, including members of Sacred Heart Catholic Church in Salem. After they passed in the summers of 2015 and 2016, respectively, the property which they had already been running as a spiritual retreat for decades was donated according to their wills to the Madonna House for their life’s work to be continued and combined with Doherty’s life work.

Stewart said that the Madonna House Foundation getting the property located in rural Missouri was an answer to prayer.

Now, living on the property at Marian Acres are three individuals, two laypeople, Patrick Stewart and Trina Stitak, and one priest, Father Denis Lemieux. Stewart and Stitak have fully embraced the “Life of Nazareth” and Lemiuex is their current priest in residence.

“Christ spent 30 years in Nazereth,” said Stewart. “Helping in Joseph’s carpentry shop, and just being a good neighbor in simple ordinary ways,” he said. "He spent three years in his ministry.”

“That’s why we’re here living the gospel the best we can,” said Stewart.

According to Stewart that’s why the “Life of Nazareth” was such an important part of faith for Doherty, Herbrand and Summers and is the reason they each devoted their lives to being simple and ordinary sorts of people in remarkable ways. Stewart, Stitak and Lemieux all live those sorts of lives as well.

Summers and Herbrand, over the years, developed Marian Acres to include several guest cottages, a workshop/craftshop and small chapel.

“Here we are, living our Madonna House way of life,” said Stewart, Stitak and Lemeiux both nodded their agreement.

Stitak summed up the personality of the Madonna House as one of hospitality.

“What is Madonna House?” rhetorized Lemieux. “It’s an open door, it’s a cup of tea being poured for a stranger,” he said. “That’s something that our foundress would say.”

“A stranger is just a friend we haven’t met yet,” he said.

“We believe that that every person who comes here is sent by the LORD,” said Stewart. “It’s not random [and] it’s not accidental—the circumstances may seem a little random, but the reality is that He was asking people to come share their lives with us,” he said. “It may be for a few days or few hours or few months or many months.

“I can’t believe that God has let me live this way of life,” said Stewart. “And I love sharing it with others,” he said. Stewart and Stitak both indicated that they feel that the solitary, celibate lifestyle has been a blessing in their lives.

“We want the people who are meant to come here to come here. People come here for all sorts of reasons…and we just welcome them in,” said Lemieux.

Lemieux explained that while they are more than willing to share their way of life with those who come, they don’t try to manage the experience of their visitors. They leave that to God.

Stitak explained that Madonna House is not about sticking to a strict program of discussion that forces people to speak about what is hurting them. Some who visit never share what their troubles are and others share when they were ready.

“It’s not a treatment program,” said Stitak. “It’s all simple—it’s coming to the table with these people, eating a meal, doing dishes together, going to the chapel together to pray numerous times a day,” she said. “That’s the genius of Catherine Doherty,” she said. “Where the simpleness of life can open us to the healing that God wants for each and every one of us,” said Stitak.

“I’ve seen it over and over again,” said Stewart, who has lived in Dent County for over three years and has been a part of Madonna House for more than 30 years. “Something is healed—on rare occasions something physical,” said Stewart. “However, usually, it’s hearts healed of bitterness and personal reconciliation found.”