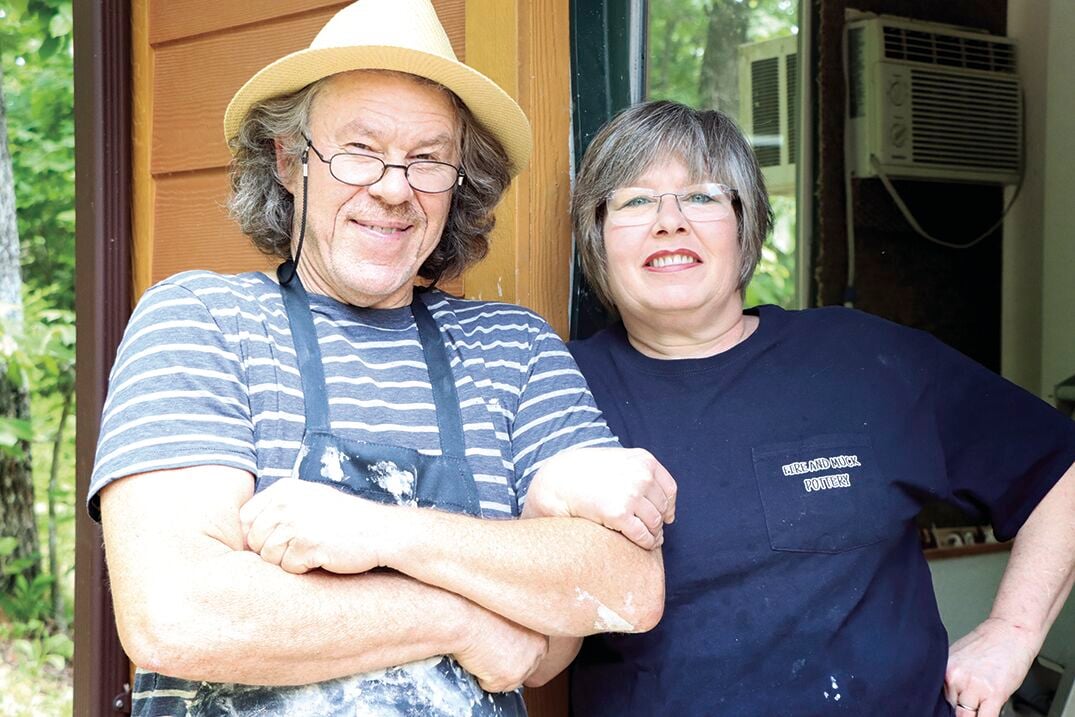 Simon Leach and Kerry Collins stand near the entrance to Fire and Muck Pottery. 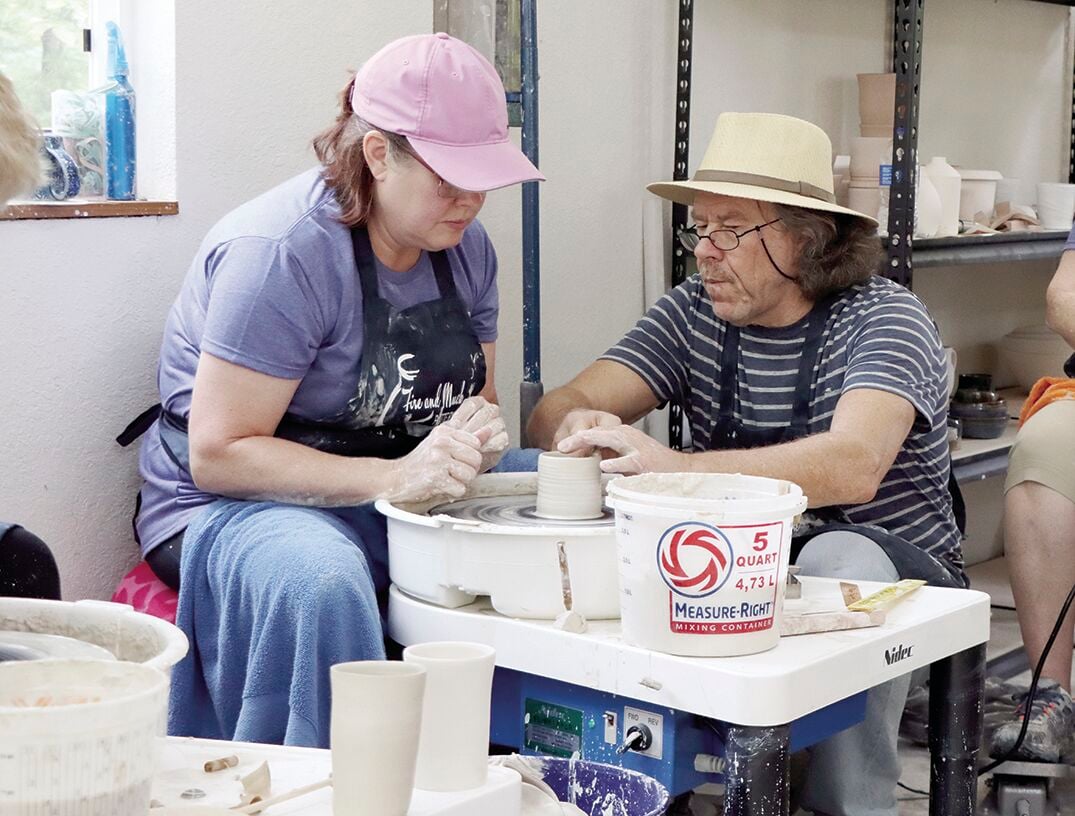 Simon Leach assists Shaunalynn Santee with her cylinder in the first day of his local workshop. 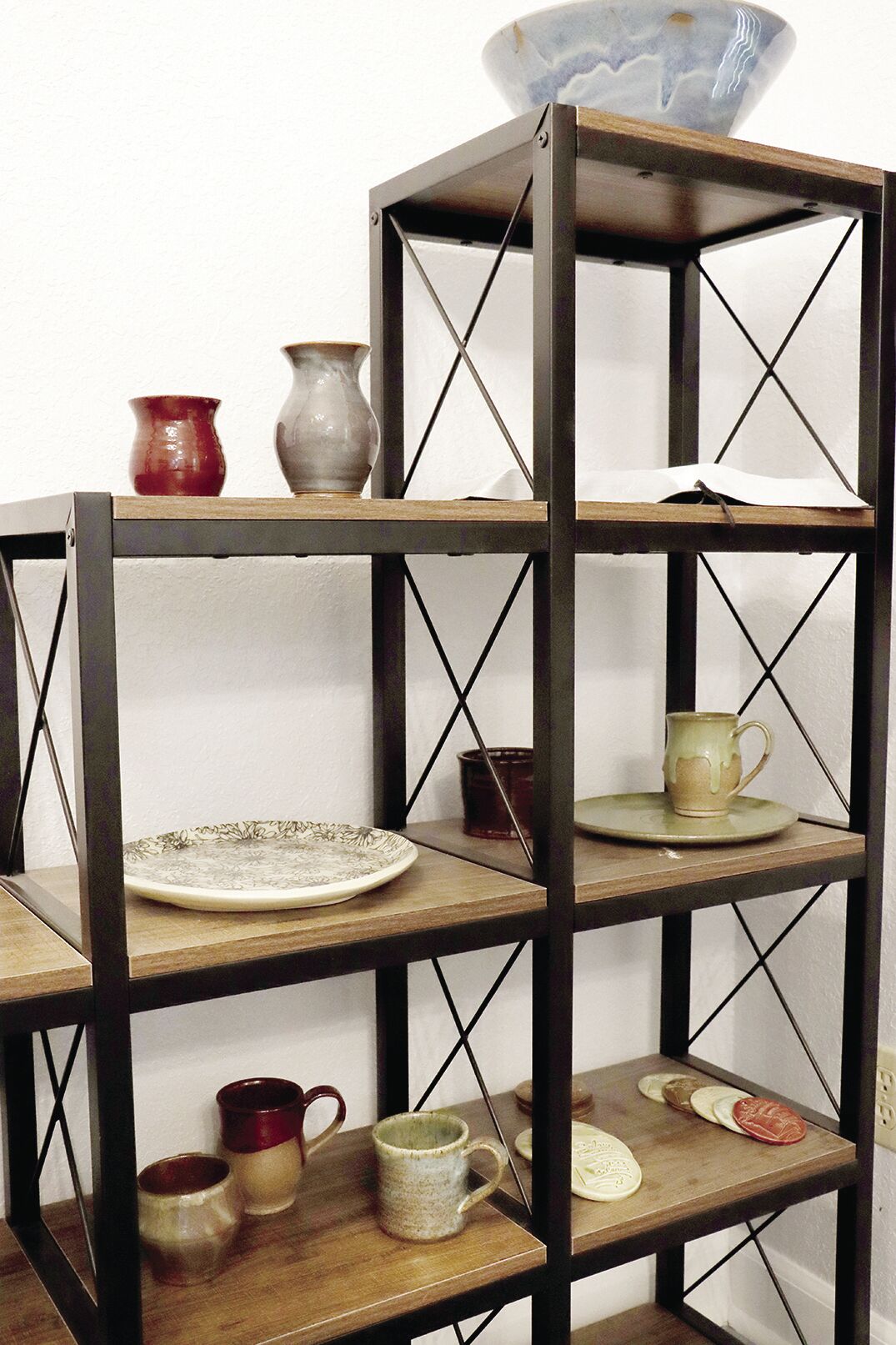 A few pieces available in the Fire and Muck Pottery showroom. 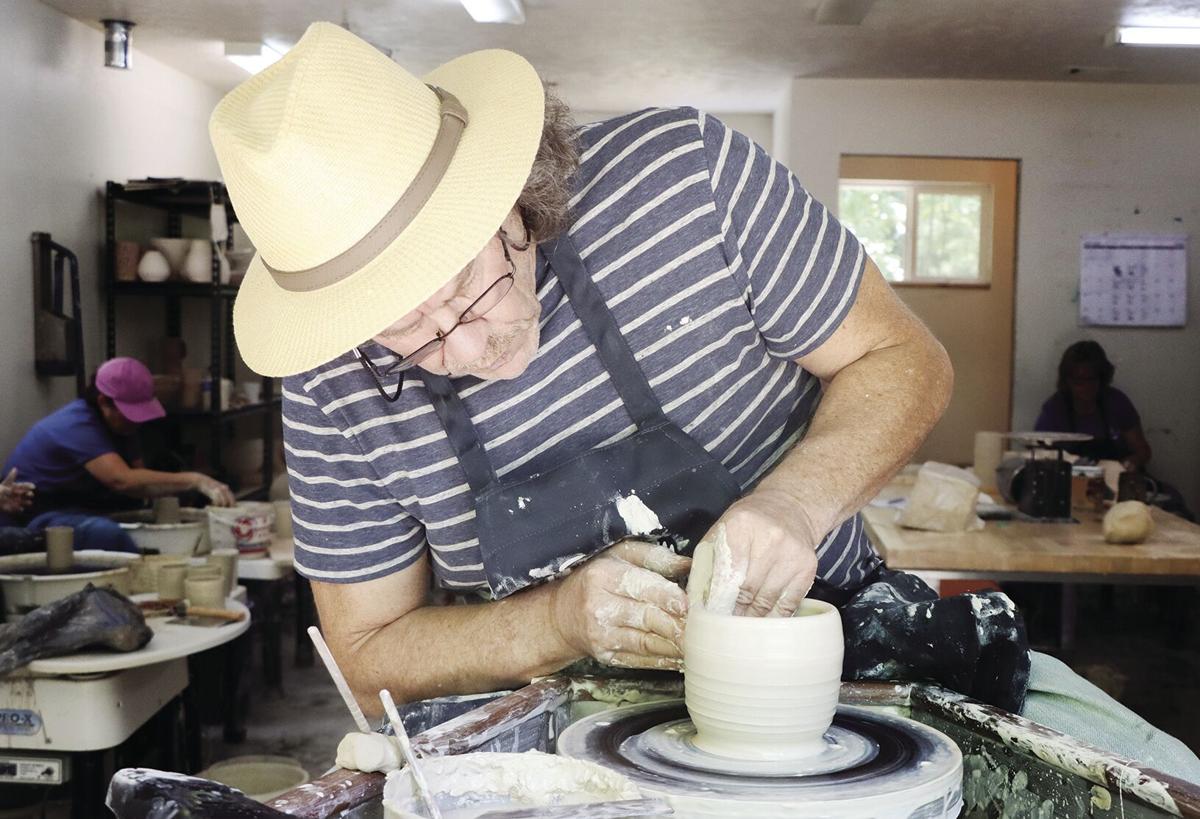 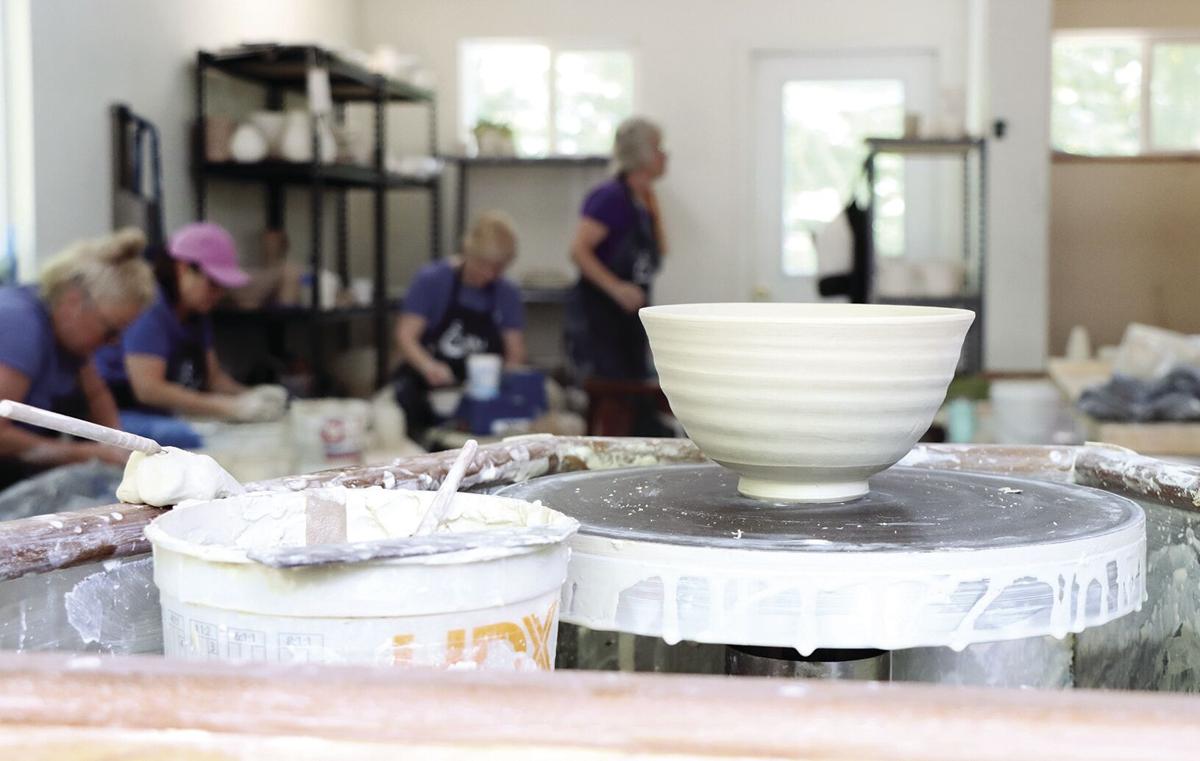 A bowl after being thrown, trimmed and ready for another drying process sits atop the potter’s wheel.

Simon Leach and Kerry Collins stand near the entrance to Fire and Muck Pottery.

Simon Leach assists Shaunalynn Santee with her cylinder in the first day of his local workshop.

A few pieces available in the Fire and Muck Pottery showroom.

A bowl after being thrown, trimmed and ready for another drying process sits atop the potter’s wheel.

“Look to combine beauty with function in a pot.”

Nestled in the woods outside of Salem is a hidden gem. Fire and Muck Pottery opened earlier this year.

Kerry Collins and husband, Sean, visited Salem for the first time in May of 2020. After a second visit in July, the Collins decided they had found their home. Relocating from South Carolina, the couple purchased a home outside of Salem. Kerry, a chef by trade, began her love of pottery a few short years ago when she attended a workshop with world-renowned potter Simon Leach.

Bernard continued to produce work until 1972 and never ended a life-long passion for travelling. He continued to write about ceramics even after losing his eyesight. The Leach Pottery still remains open today, including a museum displaying pieces by Leach and his students.

Simon Leach currently resides in Pennsylvania but has lived all over the world, including England, Spain and the Greek Islands.

Born as the youngest son of David Leach, Bernard Leach’s son, he did not take a major interest in pottery until his early 20s.

“I worked in an engineering apprenticeship in a helicopter factory,” said Leach.

In 1979 he began an apprenticeship with his father, David, in his pottery studio. For five years he learned the craft, then worked for himself.

“I learned to make my way with my craft,” said Leach. “There was no internet in those days, so things were very different, trying to get your name out there.”

Simon lived in Spain for about 20 years, continuing to hone his technique. In 2007, he began a YouTube Channel. He now has over 47,300 subscribers and over 10.5 million views of his channel. The videos demonstrate methods of pottery similar to workshops Simon has provided for over a decade. Simon has created and duplicated his own potter tools. Each is inscribed with the note, “keep practicing.”

“I have made my own way. My family heritage helps, along with YouTube and Americans love the British accent,” he said with a laugh at the studio.

A visit to Fire and Muck to speak with Leach as he guided students gave a glimpse into the creative world of pottery.

In a normal year, Simon Leach completes about 15 workshops from April through October. For workshops, there are usually no more than a dozen or so students to allow for one-on-one instruction. He also does demonstrations to larger groups and explains the craft as he completes each step.

In 2020, as nothing was normal, his traveling was cut immensely and workshops were few and far between. This workshop is a first for Leach, as he has only traveled through Missouri but never stopped. The Collins hosted a dinner party for pottery students and friends with Leach to introduce him before the workshop began. A float trip is planned to show him a bit of the Ozarks before returning to Pennsylvania.

All of those who participated in the workshop echoed Leach’s sentiment.

“Pottery is down to earth, grounding and calming.” Leach says it is an “oasis of sanity and helps keep sanity in an insane world.”

Many potters have begun using commercially-produced glazes and electronic wheels for throwing clay (throwing is the activity of shaping clay on the potter's wheel). Leach has his own methods.

Using the Leach treadle wheel, he foregoes electronic wheels. This wheel was designed by his father and uncle and is widely used. The human-powered wheel incorporates a heavy flywheel which is brought up to speed, and kept there, by a potter’s foot.

While commercial glazes are readily available, Leach creates his own. Using things from nature, he has glazed pottery pieces with everything from wood ash to dirt from a garden.

Leach has an air of humor and a vast knowledge of pottery that can only be obtained from decades of studying the craft.

“Pottery could easily become a lost trade, but it can be preserved and continued,” said Leach.

Hanging in the showroom of Fire and Muck Pottery is this Bible verse.

‘Arise, and go down to the potter’s house, and there I will cause you to hear my words.’ (Jeremiah 18:2)

Both Simon Leach and Kerry Collins observe faith in their lives.

To learn more about:

• Leach, visit simonleachpottery.com or find his channel on YouTube.

• Fire and Muck Pottery, visit the Facebook page or fireandmuckpottery.com. You can also call Kerry Collins at (619) 847-2313.