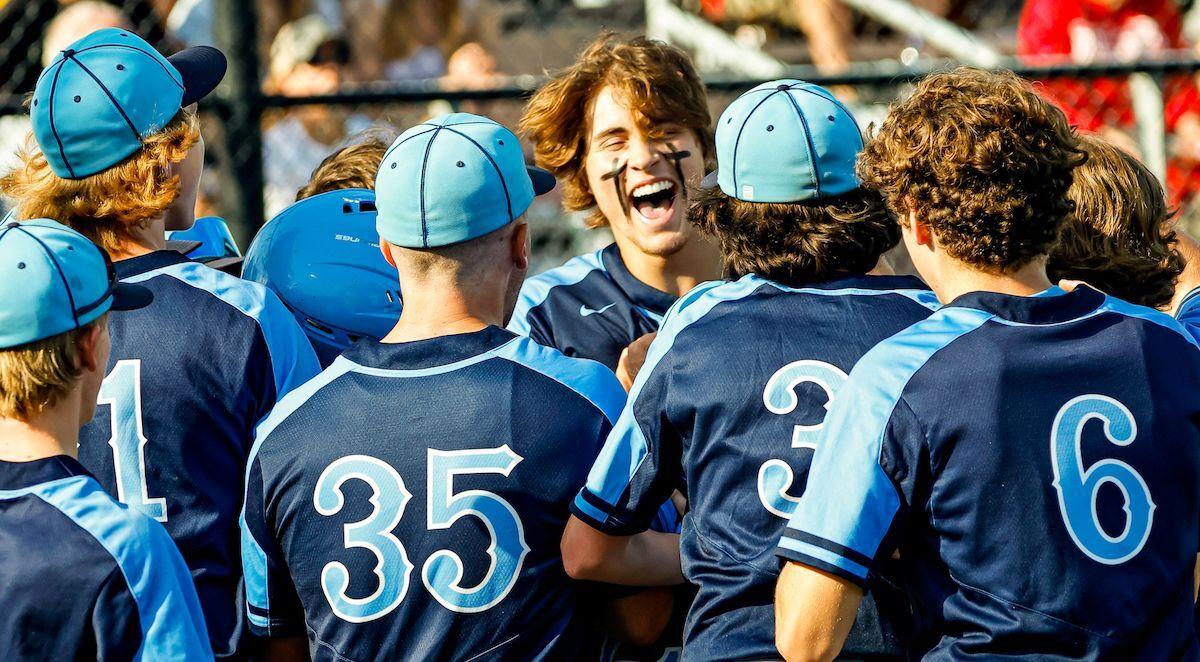 Salem players celebrate the solo home run hit by junior Garrett Connell in the top of the third inning during Thursday's Missouri Class 4 District 9 Tournament championship game against St. Clair in Sullivan. Second-seeded St. Clair got a run in the bottom of the seventh inning to clip fourth-seeded Salem, 3-2. 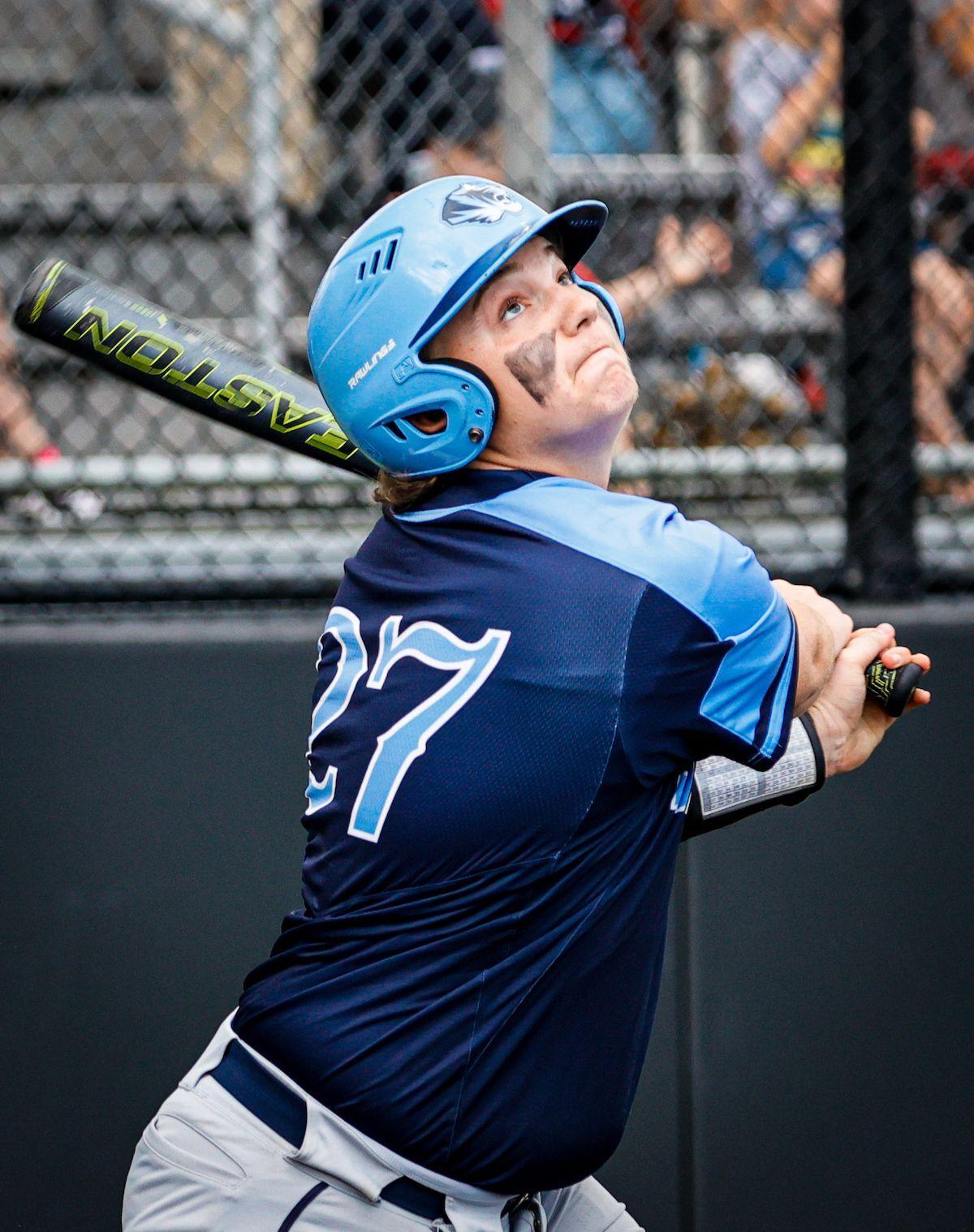 Salem senior Elijah Wethy watches the flight of the ball during an at-bat in the Class 4 District 9 Tournament Thursday at Sullivan.

Salem players celebrate the solo home run hit by junior Garrett Connell in the top of the third inning during Thursday's Missouri Class 4 District 9 Tournament championship game against St. Clair in Sullivan. Second-seeded St. Clair got a run in the bottom of the seventh inning to clip fourth-seeded Salem, 3-2.

Salem senior Elijah Wethy watches the flight of the ball during an at-bat in the Class 4 District 9 Tournament Thursday at Sullivan.

The Salem Tigers were oh, so close. Just one hit away from perhaps pulling out a district championship as a No. 4 seed.

Unfortunately for the Tigers, it was second-seeded St. Clair that came up with that key hit in the bottom of the seventh inning to pull out a razor-thin victory.

With the bases loaded, senior Wesley Hinson slapped a one-out, line-drive single over a drawn-in Salem outfield to produce the game-winning blow in the bottom of the seventh, allowing St. Clair to pull out a 3-2 walk-off victory over Salem in the championship game of the Missouri Class 4 District 9 Tournament Thursday, May 20 at Sullivan High School.

Hinson’s blow ended the district trek of the Tigers, which included one-run victories over fifth-seeded St. James in the first round and top-seeded Owensville in the semifinals. Salem concludes the season with an 11-15 record.

The winner of that game advances to state quarterfinal action May 27.

The pitching of right-handers senior Baylor Petty and junior Garrett Connell cooled down St. Clair bats that have been hot in recent games.

St. Clair reached Petty for two runs in the bottom of the first inning, as senior Chase Walters opened with a double to leftfield. After a strikeout, Bulldog senior Blaine Downey singled to left then stole second base, putting runners on second and third. Senior Samuel Oermann drove in both runs with a two-run single past the Tiger second baseman.

Salem then shut out St. Clair over the next five innings, enabling the Tigers to tie the score with solo runs in the top of the third and fourth frames.

In the third Connell got Salem on the scoreboard by cranking a long, two-out solo homer over the leftfield fence.

The Tigers then tied the game 2-2 in the fourth. With two outs junior Collin Heavin legged out an infield single and junior Korben Barred reached base with an error on the Bulldog second baseman. Senior Elijah Wethy drove in the run with an RBI single to left.

Both teams would throw goose eggs the rest of the game until the bottom of the seventh.

Downey opened the St. Clair seventh with a line-drive to rightfield, which dropped for an error off the outfielder’s glove. After a flyout, Bulldog senior Brady Simpson walked on four pitches followed by a single to center by senior Cole Venable to load the bases. Hinson then delivered his game-winning hit.

Salem largest missed-opportunity to score was in the second inning, as the Tigers loaded the bases with singles by freshman Kaiden DuBois and Heavin followed by a two-out walk to Barred. However, a strikeout on a 3-2 count would end the frame scoreless.

Petty worked 3 2/3 innings on the mound for the Tigers before being replaced by Connell, who was tagged with the loss. Oermann was the starting hurler for St. Clair and threw five innings. Downey came on in the sixth inning and got the win.

“I felt like we played the kind of game we needed to play to have a chance to win,” said Salem head coach Phil Karr. “Our pitching was pretty solid, as it has been the latter part of the year. We played a senior-dominated team with three freshmen in our lineup for half the ball game, so I think we gave them all they wanted and more.

“We stranded more runners in scoring position then they stranded, so we obviously had our chances. The St. Clair pitchers made some big pitches when they needed them most. We lost several games this year due to our failure to execute properly when situational hitting was key. I was chomping at the bit all game to do a suicide squeeze but never had the opportunity because we either had the bases loaded and two outs or first and second. You can’t give good teams more than three outs, and we made a critical mistake that they capitalized on.

“I’m more frustrated for the kids right now because you never know if that was their only opportunity to win districts. We definitely had our opportunities multiple times and just couldn’t get the big hit. You have to seize the moment when the opportunity arises because it is either you’re celebrating or you’re watching your opponent celebrate.”

“Next year we return a solid core of kids who hopefully are hurting enough after losing a big game to improve their game over the summer,” Karr said. “We graduated three seniors who started defensively and one who was our DH. We had a couple pretty good senior pitchers that we lose so a couple of our young guys will have to step up and get a lot better as pitchers. Several of our young players got a lot of at-bats this year, so that should help them a lot next year and beyond.”