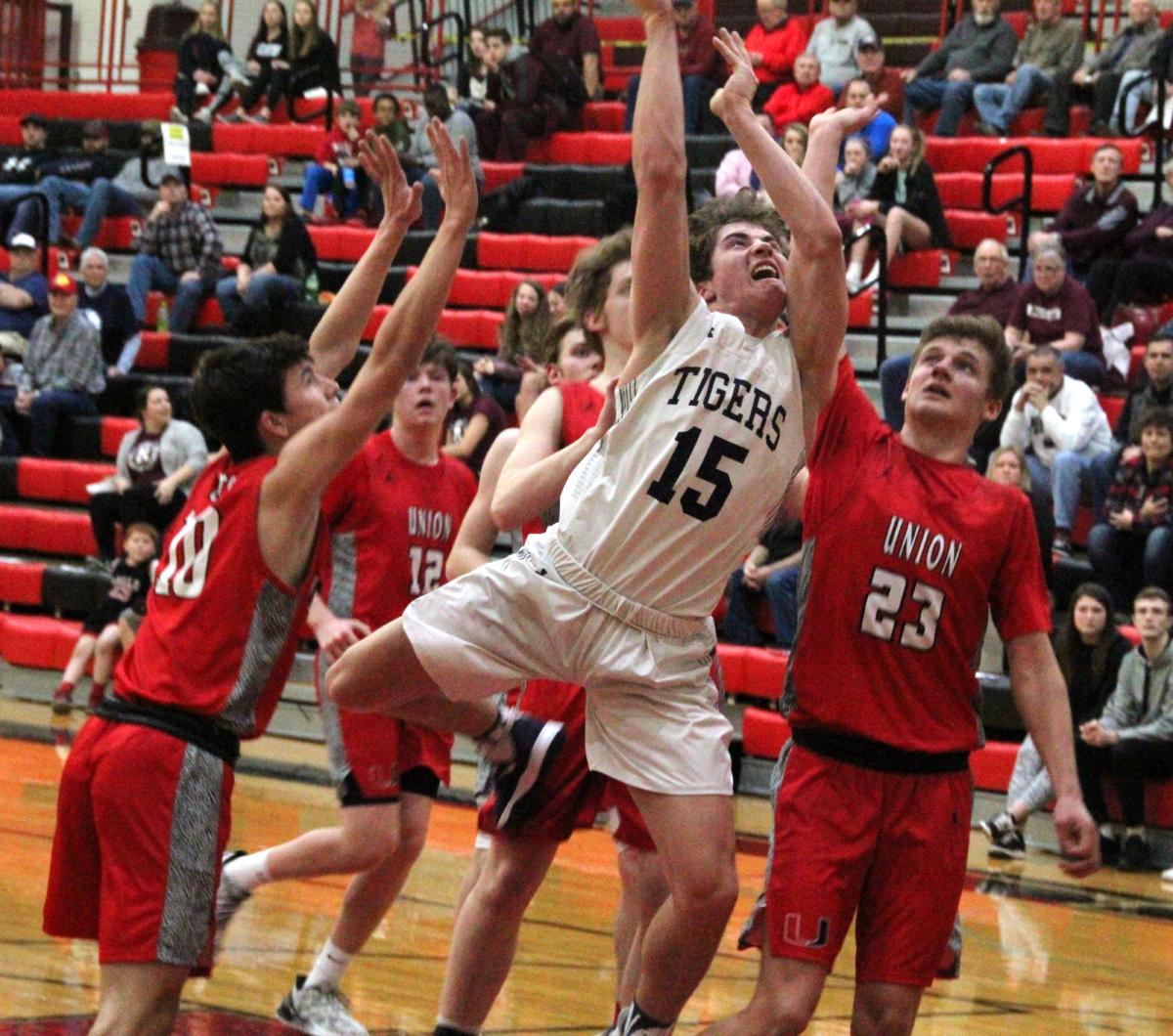 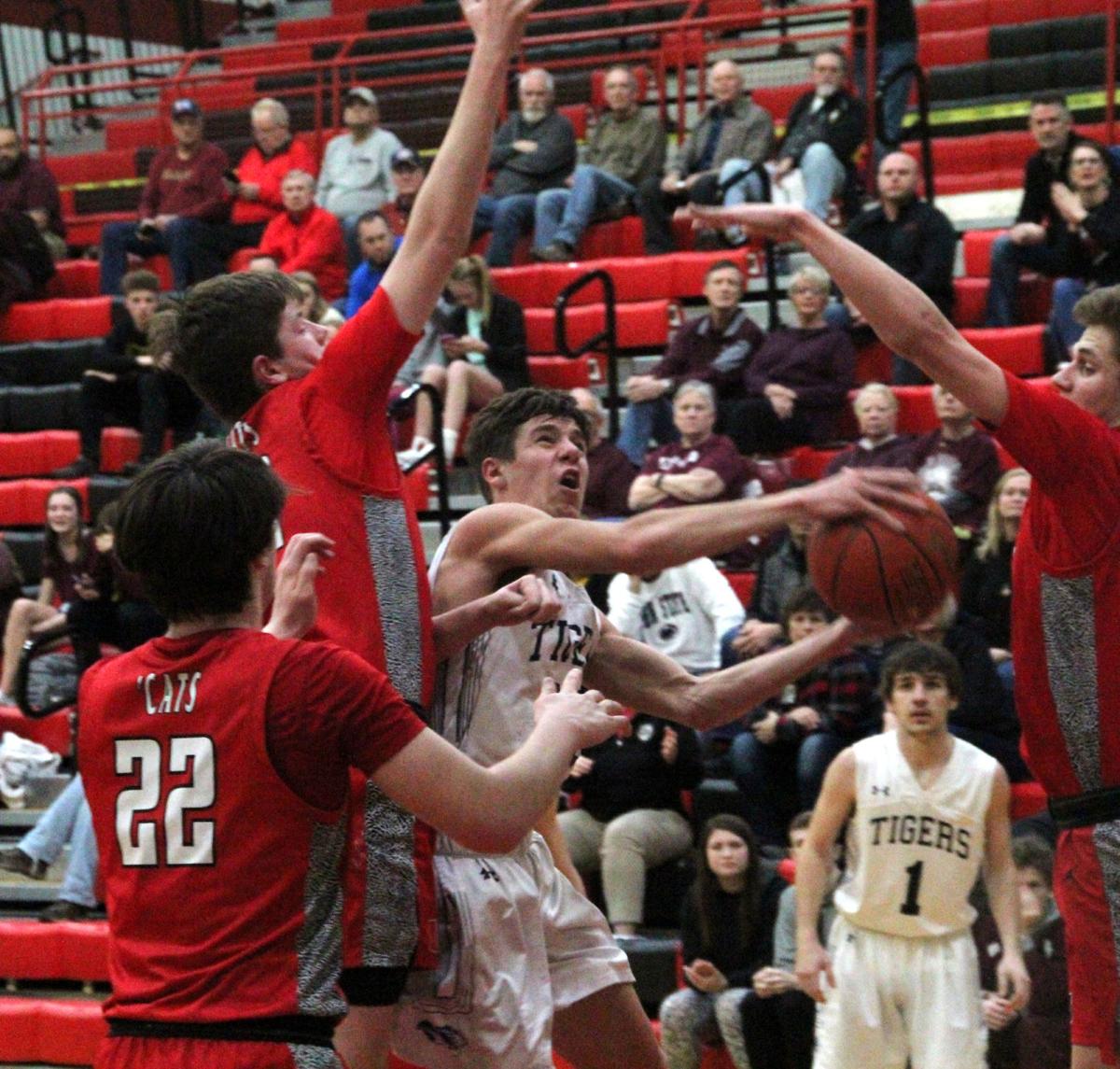 Salem senior guard Reese Dodson is surrounded by a trio of Union defenders during semifinal play of the Class 4 District 9 Tournament Tuesday, March 3. The Tigers moved on to the district finals by defeating Union in overtime, 61-50. 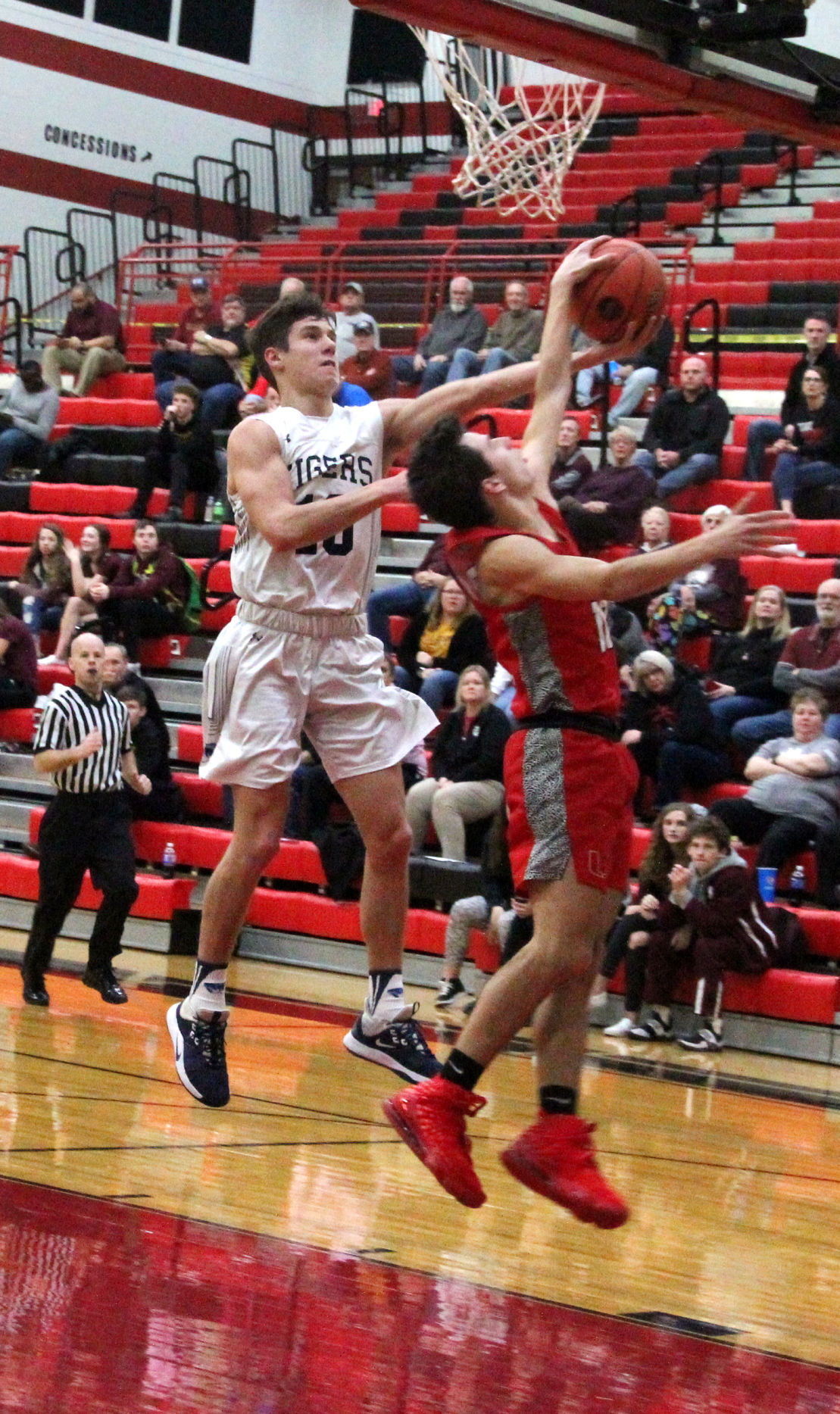 Salem senior guard Reese Dodson is surrounded by a trio of Union defenders during semifinal play of the Class 4 District 9 Tournament Tuesday, March 3. The Tigers moved on to the district finals by defeating Union in overtime, 61-50.

On the night in which Salem High School senior guard Reese Dodson reached 1,000 career points, there was a time in the game Tuesday, March 3 fans wondered if the Tigers would score at all.

Fortunately for the Tigers, the rim was nearly as small for the Union Wildcats.

And after falling behind by as much as nine points in the fourth quarter, the Tigers rode the suddenly hot shooting hand of senior forward Carter Chilton to stage a rally and eventually tie the game to force overtime.

And in the extra period it was all Salem, as the Tigers went on to take a 61-50 victory to advance to the District 9 championship game against Phelps County neighbor Rolla.

The District 9 boys’ and girls’ champions will move on to sectional competition Tuesday, March 10 against the District 10 champions at Gibson Arena on the campus of Missouri S&T in Rolla. The girls’ sectional game is to begin at 6 p.m. with the boys’ contest following at 7:45 p.m.

Tuesday, the opening 5:44 of the Salem/Union semifinal clash was scoreless. Union finally broke the ice when 6-3 sophomore guard Kaden Motley made a steal and slammed home a dunk at the 2:16 mark. Union’s 6-3 senior forward Caleb Mabe added back-to-back baskets in the lane to make it 6-0. Salem got its first points on a three-pointer from Chilton with just :36 remaining in the opening period.

Finally the scoring picked up the rest of the way. There were five 3-pointers made in the second period, with the Wildcats taking as much as a four-point advantage. However, Dodson ended the half going 4-for-4 at the free throw line to tie the game 17-17 entering intermission.

The lead would change hands four times in the third period.

Dodson scored on a put-back, was fouled and added the free throw with 1:09 remaining to trim a Union lead to one. The Wildcats’ 6-3 sophomore guard Matthew Seely drilled a three-pointer off the right baseline with :07 left, giving the home team a 30-26 advantage going into the fourth quarter.

It appeared Union was ready to pull away in a wild fourth quarter, which would feature a whopping 31 free throw attempts by the two squads. A conventional three-point play followed by two more free throws to open the fourth gave Union its largest lead of the game, 35-26.

But the Wildcats missed their opportunity to ice a victory with poor free throw shooting. In the final 2:20 of regulation Union would miss 6-of-9 free throw attempts.

It was Chilton that heated up for the Tigers, as he scored 11 points in the fourth quarter, including an 8-of-9 free throw performance as well as a three-pointer.

Salem went on a 11-2 run, and tied the score 39-39 at the 2:51 mark when sophomore guard Garrett Connell hit both ends of one-and-one free throws.

The Tigers would take their first lead of the quarter with 40 seconds left in regulation when junior guard Braiden Carmack hit a driving layup, was fouled and added the free throw to go up 43-42. Dodson followed by making a steal, being fouled and hitting two free throws at the :31 mark to make it a three-point game.

However, Union wouldn’t go away, as Seely nailed a trey from the right corner with :22 left. Salem called a timeout to work a final shot but missed a 15-footer with :02 remaining, forcing overtime.

Salem never trailed in the extra period, as Dodson made a steal and hit a layup and then added a free throw 50 seconds later.

After the Wildcats missed two free throws, Tiger 6-9 junior post Lucas Morrison got open inside for a pair of layups, and the Tigers had a 52-45 edge with 2:08 left.

“It was a little nervous at the beginning,” said Salem first-year head coach Bryan Carty. “The shots weren’t falling. It was a bigger environment, a bigger gym and I think that affected us. We were lucky to be tied at half, because we shot 30 percent in the first half. After that we got the jitters out.”

Despite hitting just three field goals Dodson finished with a game-high 20 points – 14 at the free throw line – while Chilton added 17 points and Morrison 11.

Seely had 17 points to lead Union, which finishes with a 5-22 record.

“It was a little low-scoring in the first half,” said Dodson, who had to be called back onto the court after the game by his teammates, as it was announced to the crowd he had reached the 1,000-point career mark. “It was a slow-paced game. Free throws really helped a lot to clinch the game.”

Dodson was a key player while the Tigers struggled the previous couple of seasons. He is finally getting the taste of some postseason success as a senior.

“It feels really nice,” Dodson said. “All the work we put in has paid off. Being able to play for a district title is a great opportunity.”

Going in the Tigers felt the district championship was up for grabs.

“We knew we had a good chance going far in district,” Dodson said. “That pushed us; it’s something that hasn’t been done in a while.”

Rolla and Salem split a pair of games earlier this season, with each squad taking home a blowout victory. Dec. 19 at Rolla the Bulldogs whipped the Salem Tigers 74-42 and in the St. James Tournament Jan. 22 the Tigers returned the favor 85-68.

“It will come down to who is ready to play,” Carty said. “Who makes shots. I feel if we make our shots, we’re going to be good to go.”

“We have to play really strong,” Dodson said. “Handle the ball and play with intensity. Keep our heads in the game.”

The score by periods: