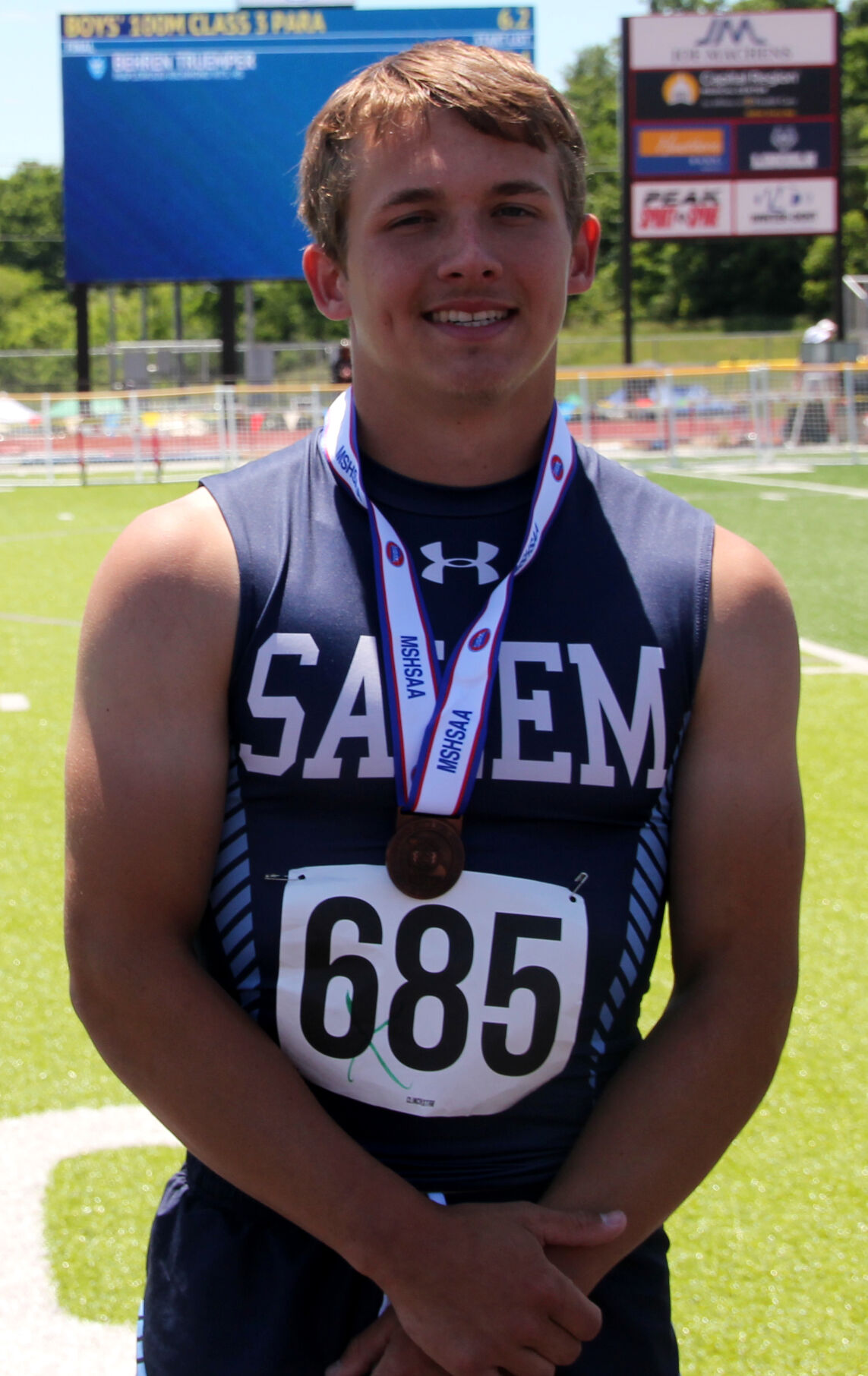 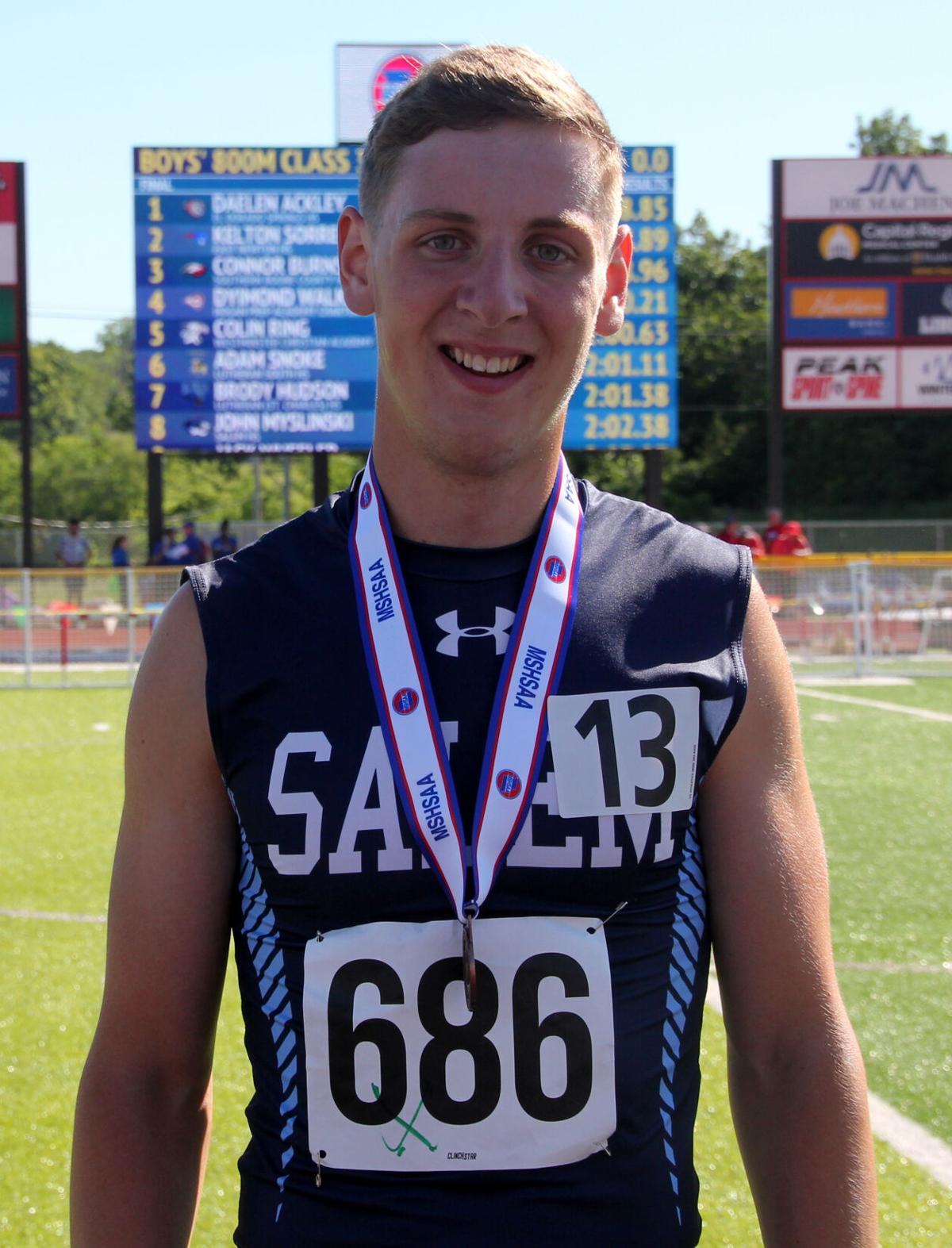 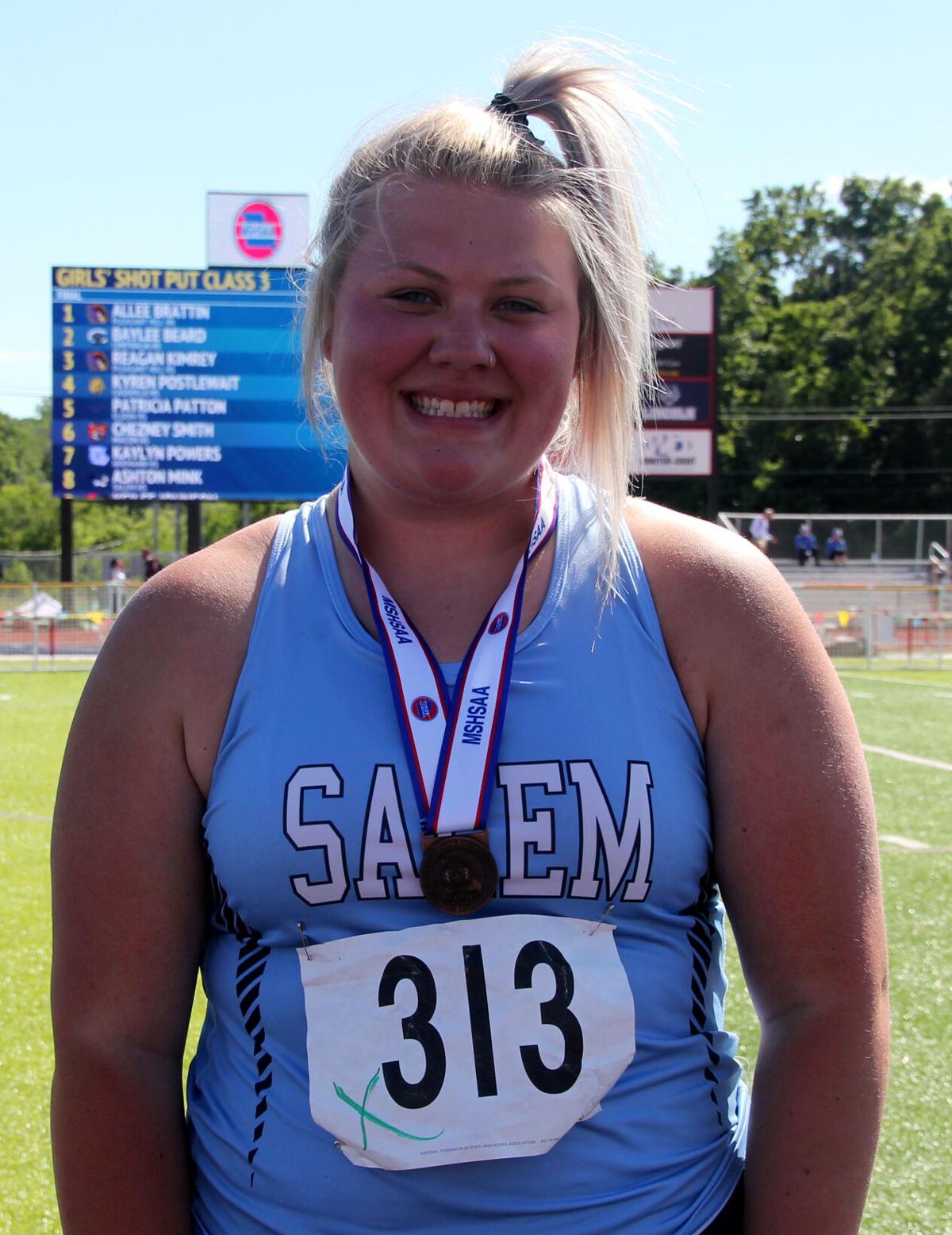 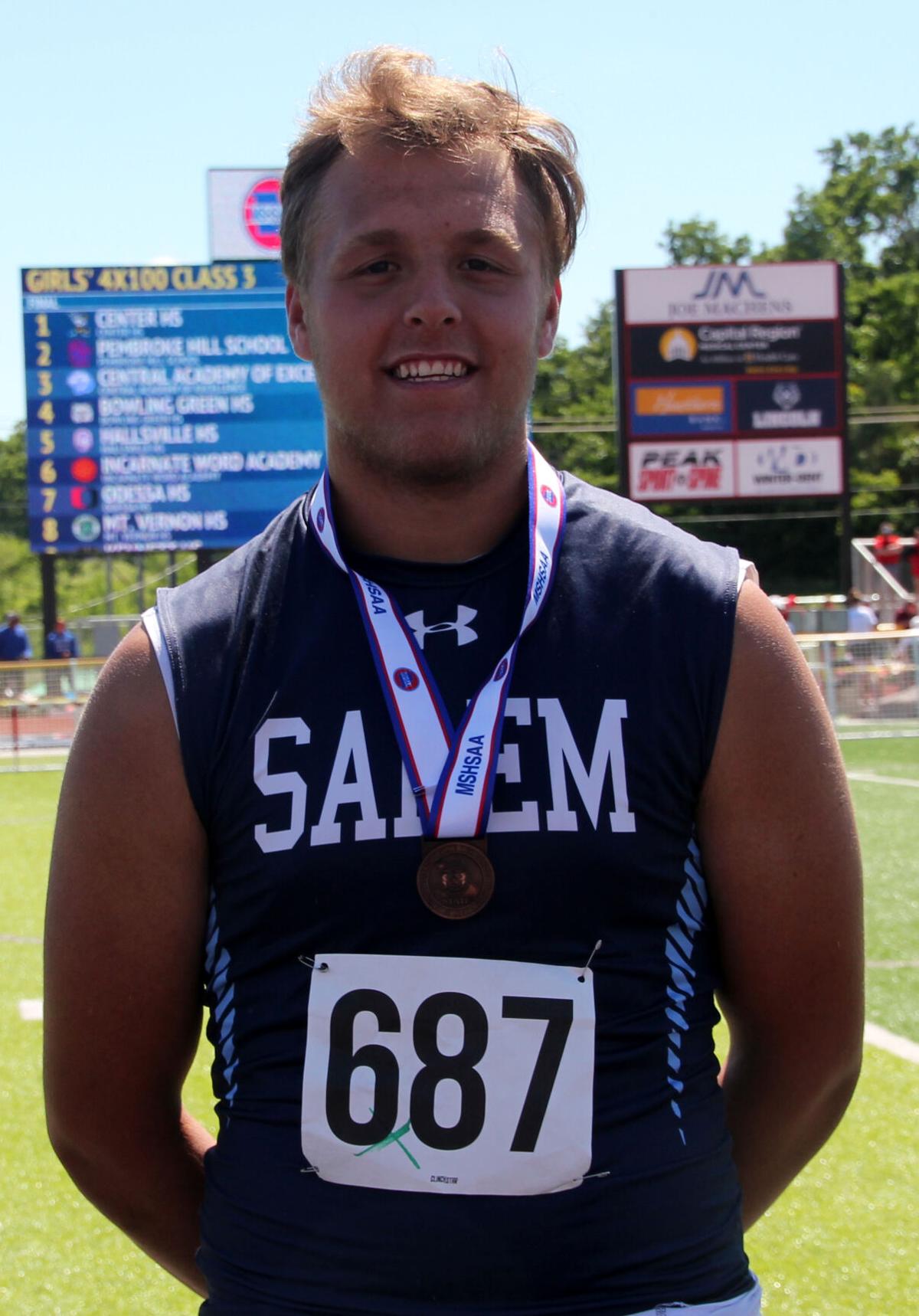 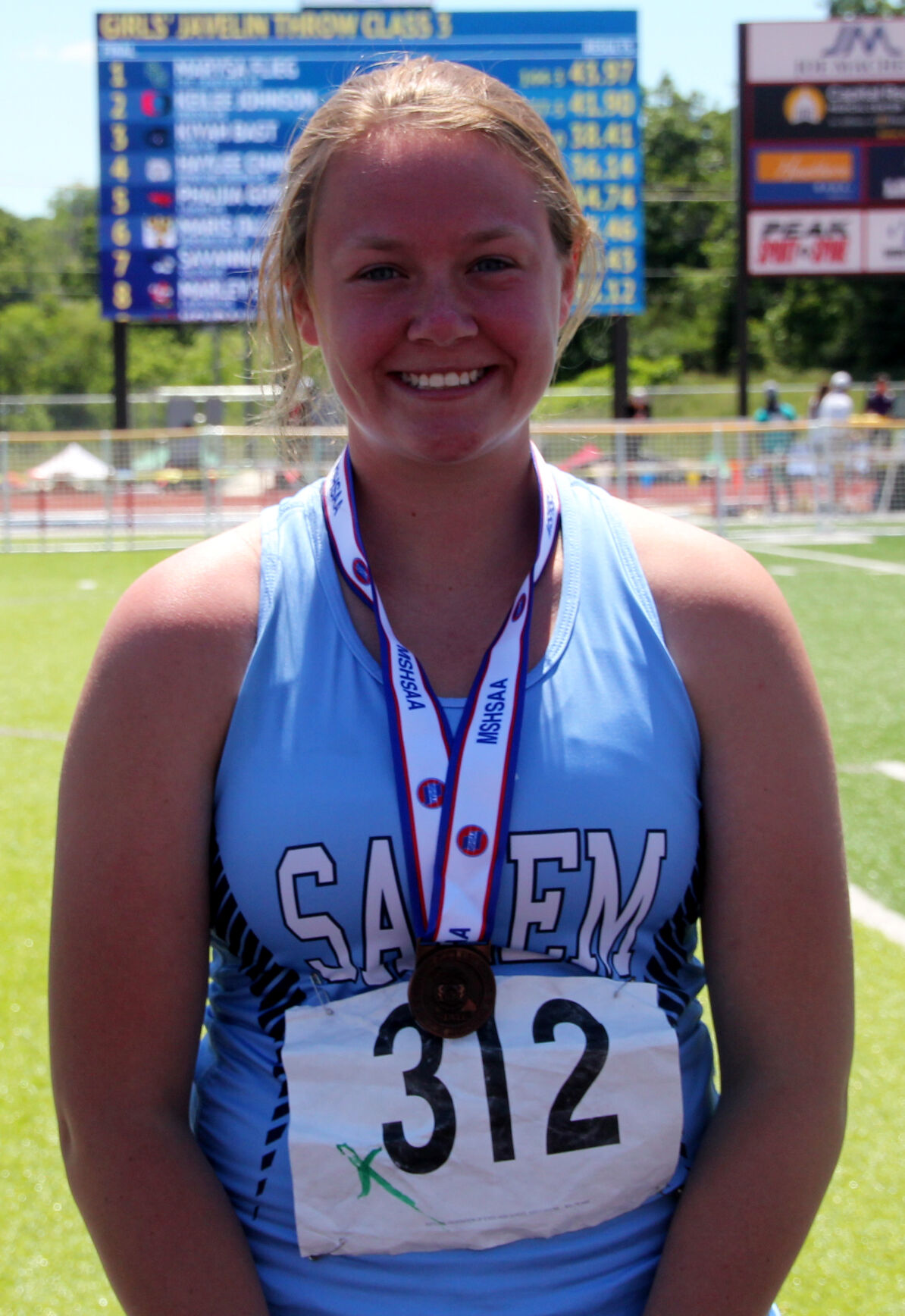 Salem sent five participants to the Missouri Class 3 Track and Field State Championships Saturday, and all five Tigers made their way to the all-state podium.

With the rain finally going away Saturday, the Class 3 State Championships were held at Adkins Stadium on the campus of Jefferson City High School.

For the Salem boys all-state performances came from senior Caden Camden, who finished fifth in the pole vault at 3.92 meters; junior Nathan Pyle sixth in the discus at 42.83 meters, and John Myslinski eighth in the 800-meter run with a time of 2:02.38. For the Lady Tigers sophomore Savannah Manthey was seventh in the javelin at 33.43 meters and senior Ashton Mink eighth in the shot put at 11.38 meters.

As a team the Salem boys tied for 32nd with eight points and the Lady Tigers tied for 48th with three points.

It was the second all-state medal for Camden, who finished seventh in the event as a sophomore with a personal-record of 12-9 feet that lasted until Saturday. And this year at the state meet Camden upped that PR, ending at 12-10 ¼.

A strong start allowed Camden to hold a share of the lead early on. It was a good while before he finally had his first missed attempt.

“I felt good,” he said. “I really surprised myself coming out so clean, and I knew I had to. It was fifth to eighth if I wasn’t clean early.”

Camden knew it was probably going to take a new PR to return to the medal stand.

“Of the four kids from our own sectionals, I was the lowest,” he said. “I knew it was going to be good competition going in.”

• Pyle had a sense of urgency late, as his first throw Saturday was a scratch and his second was down in the pack. After his third throw he was in an all-state dogfight. However, his final attempt was his best and secured that all-state spot.

“I wish I had that first one back,” Pyle said of the scratch. “That would have been a good one. But I got one in (on the second throw), so I was just going to go sling it. Then that fourth throw was my best.

The goal now for Pyle is to get back to Adkins Stadium a year from now.

“I’m probably going to do a lot of football this summer and during the winter practice hard for shot (put) and discus before the track season starts. A year from now I know I’m capable of 160 to 165 (feet) in the discus and 55 to 58 (feet) in the shot.”

• Competing in the first javelin flight, Manthey got off a couple of good throws to set the tone for herself, then finished strong with throw No. 4.

“I started throwing solid, then toward the end I started thinking about it.” she said. “Then my last throw was my best.”

Picking up the javelin for the first time this spring, Manthey figures her state experience is going to be a big boost next year.

“I’ll probably do my same events next year,” she said. “I may try something new, just to try it. I think I can do good next year if I keep working in the weight room. Just keep working.”

• Both Mink and Myslinski needed big finishes to get to the medal stand.

A huge kick over the final 200 meters allowed Myslinski to passed a number of runners to get the final all-state placement, setting a new PR by two seconds.

“With about 300 (meters) left I was trying to count how many runners were in front of me,” Myslinski said. “I counted eight or nine, so I was right there. And it was my senior season and I had nothing to lose. With about 150 (meters) left I thought I was in about ninth.”

However, Myslinski zoomed past Jack Wheeler of St. Michael the Archangel near the finish line to get to the podium.

“I didn’t know where I finished,” he said immediately after the race’s finish. “Then I looked at the scoreboard and I knew.”

A state-qualifier in cross country this school year as well, Myslinski reached a longtime goal in putting that all-state medal around his neck.

“It means everything to me,” said Myslinski, who plans to run cross country and track at Missouri S&T in college. “I’ve been doing track since seventh-grade. All-state was the greatest thing I could asked for my senior year.

Mink was sitting in ninth place going into her final throw – with all the throwers after her already having secured a spot on the podium. She needed her best throw in the last of her Lady Tiger career to move up one spot into all-state position…and she got it.

“That last throw…I don’t know; the adrenaline was pumping so crazy. I just knew I had to put everything into it. It was my last chance. Coach Mac (Salem throwing coach Brian McNamee) always told me it only takes one, and that’s exactly what happened.

“At first I wasn’t nervous. But after the third throw, I was very nervous. I was just glad to get to lengthen my senior year out through track.”

May 29 at Jefferson City