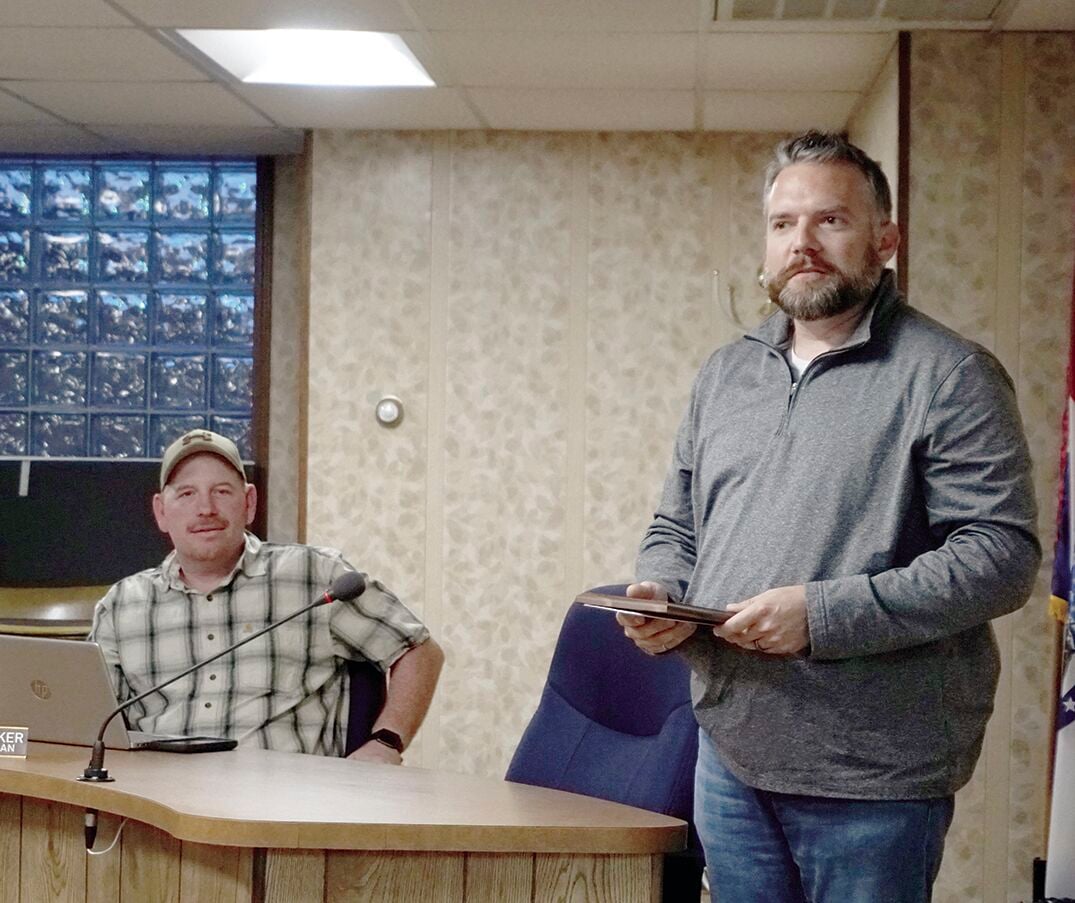 Former Chairman of the Board and West Ward Alderman Kevin James making remarks after Mayor Brad Nash presented him with a plaque commemorating his time on the board. “William Esper once said that ‘if you’re not growing ,you’re dying.’ That’s my personal motto, professional, spiritual as well. I hope that’s the same for the city.” 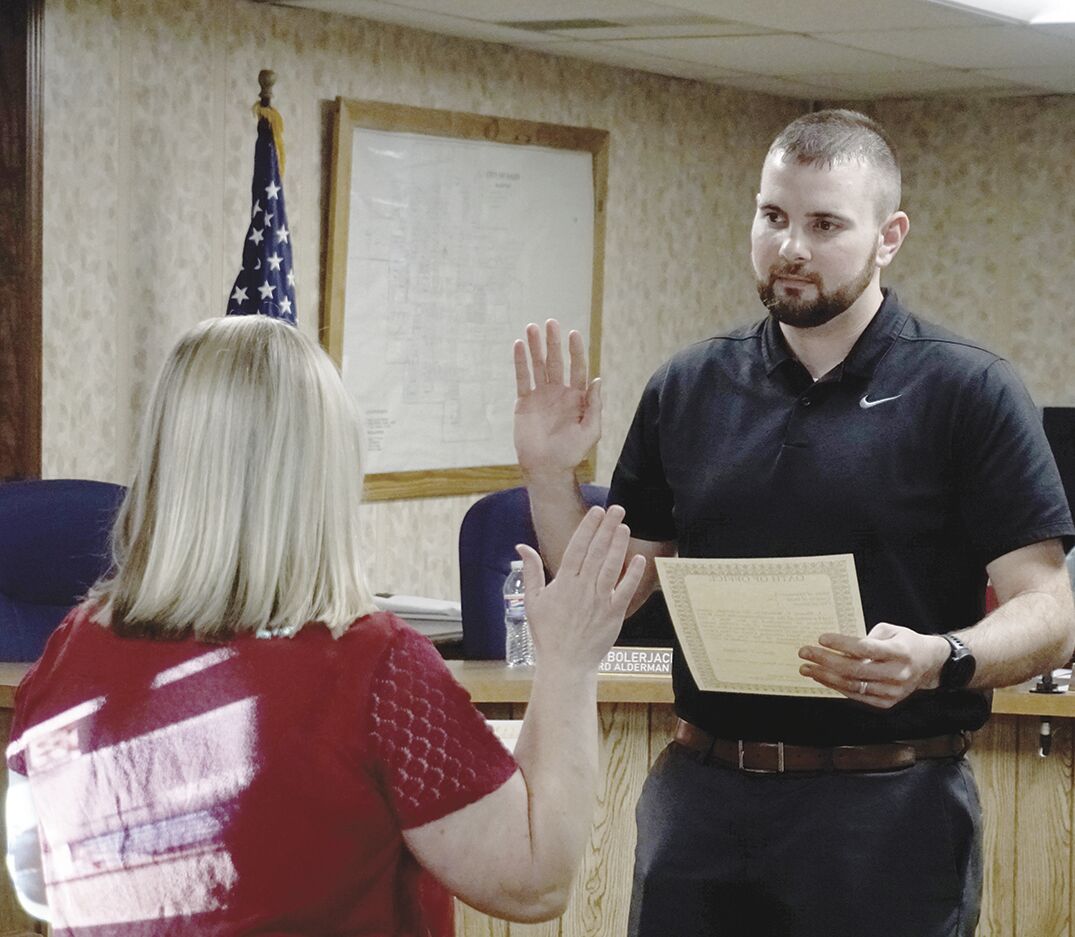 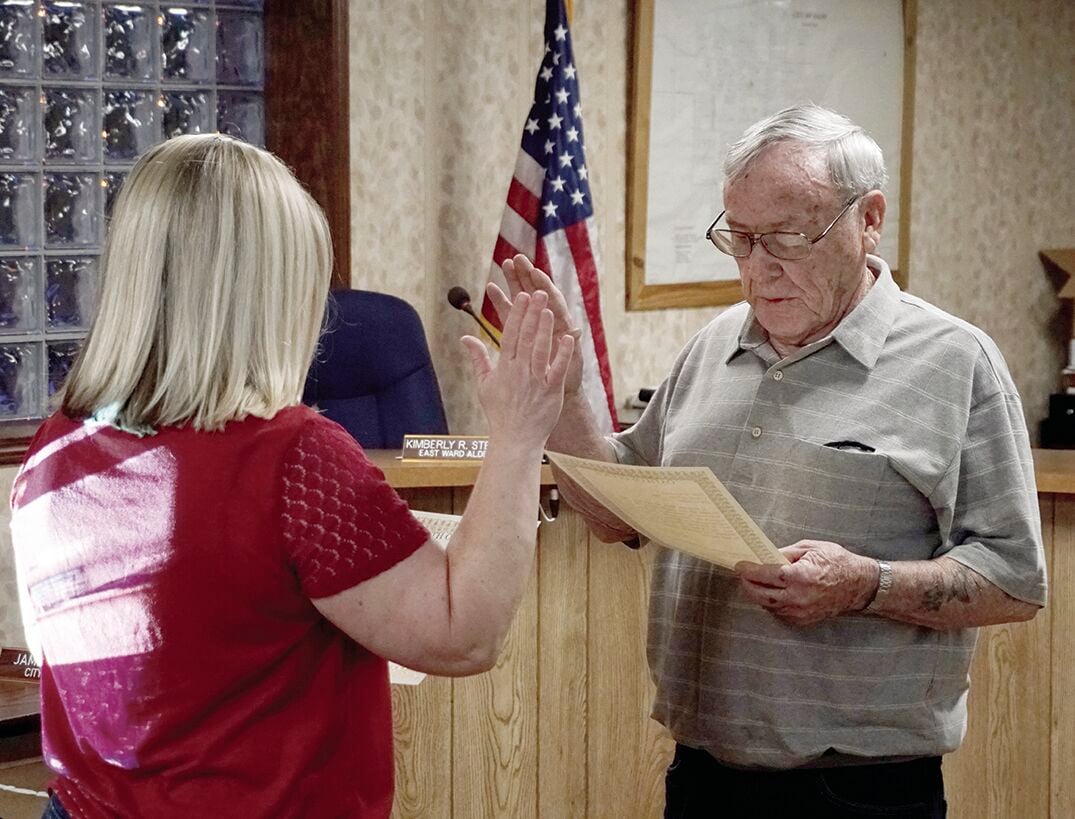 Former Chairman of the Board and West Ward Alderman Kevin James making remarks after Mayor Brad Nash presented him with a plaque commemorating his time on the board. “William Esper once said that ‘if you’re not growing ,you’re dying.’ That’s my personal motto, professional, spiritual as well. I hope that’s the same for the city.”

A bill (No. 3476) that would have authorized the mayor to act on behalf of the city of Salem to pursue a lease-purchase funding agreement totaling $1 million for a guaranteed energy savings project failed for lack of a second April 19 at the regular meeting of the board of aldermen.

Mayor Brad Nash called for a motion regarding Bill No. 3476, and West Ward Alderman Greg Parker motioned to accept.

Nash said, “We have a motion. Do we have a second?”

The board sat silent.

• Bill No. 3477, which is in regards to a waste water treatment facility, was tabled due to language in the bill needing to be corrected. James said that he was in favor of the bill once those corrections were made.

• Election results were certified. James, who served as board chairman, lost to Kenny Nash in the West ward, while Bolerjack won in the East ward.

Mayor Nash presented James with a plaque in honor of his time served on the board. James said as he stepped down, “It’s been a great opportunity to serve the public for the last two years. It’s been a stressful time for many different aspects, especially the idea of what we went through as a nation as well as in our community. I appreciate everything that everyone’s done to support me as well as the idea of what I would, could try to do to support you. William Esper once said that ‘if you’re not growing you’re dying.’ That’s my personal motto, professional, spiritual as well. I hope that’s the same for the city.”

Bolerjack, who was already serving after filling the unexpired term of Rachel Hinderliter, and Kenny Nash took their seats after being sworn in.

• After City Administrator Ray Walden gave his report, including information on utility billing issues, Bolerjack asked Walden, “Are we able to schedule a utility committee meeting soon to discuss some of those concerns?”

Walden responded, “We’ve got some options we’re waiting on more information on,” he said. “As soon as we get that, we’ll coordinate the scheduling of a meeting.”

Friday, mayor Nash called a meeting of the utility for Monday night. (See thesalemnewsonline.com for a report on the meeting.)

Mayor Nash addressed some of the concerns that he has been made aware of by Salem residents.

“There’s some information that’s been put out on Facebook and other media avenues that their (Salem residents) utility bill is going to be six times what it normally would be for this usage,” he said. “Can we verify that that is not correct?”

Walden answered, “So, it takes either that once a year automatic adjustment or action by the Board of Aldermen to change our utility rates,” he said. “So, barring that, there will be no change in our rates and peoples’ bill will be using the rates that we have had for some time.”

Alderman Nash asked Walden, “Ray, I’d like to just get an update on, financially, where we are on the new meter system?”

Walden responded, “This will be the third month that we pulled in timely reads and we had utility billing. The bills are accurate. If somebody has a question about their bill they can bring it in. And if there’s an adjustment needed we’ll make that.

“We are waiting on a few meters yet to complete the installation. For those meters we are manually reading them, so that does not keep us from being able to process bills.”

Walden said that he expects that when those meters arrive and are installed, the AMI project will be completed.

“We’ve been reading the vast majority of our reads with the AMI system for several months now. And so, substantially, it’s near completion, but we just have a few remaining meters left. This next billing we’ll get some updated figures on the whole project as well as our utility billing.”

Salem citizens voiced their concerns at the April 19 board of aldermen meeting about three things they believe the city should address.