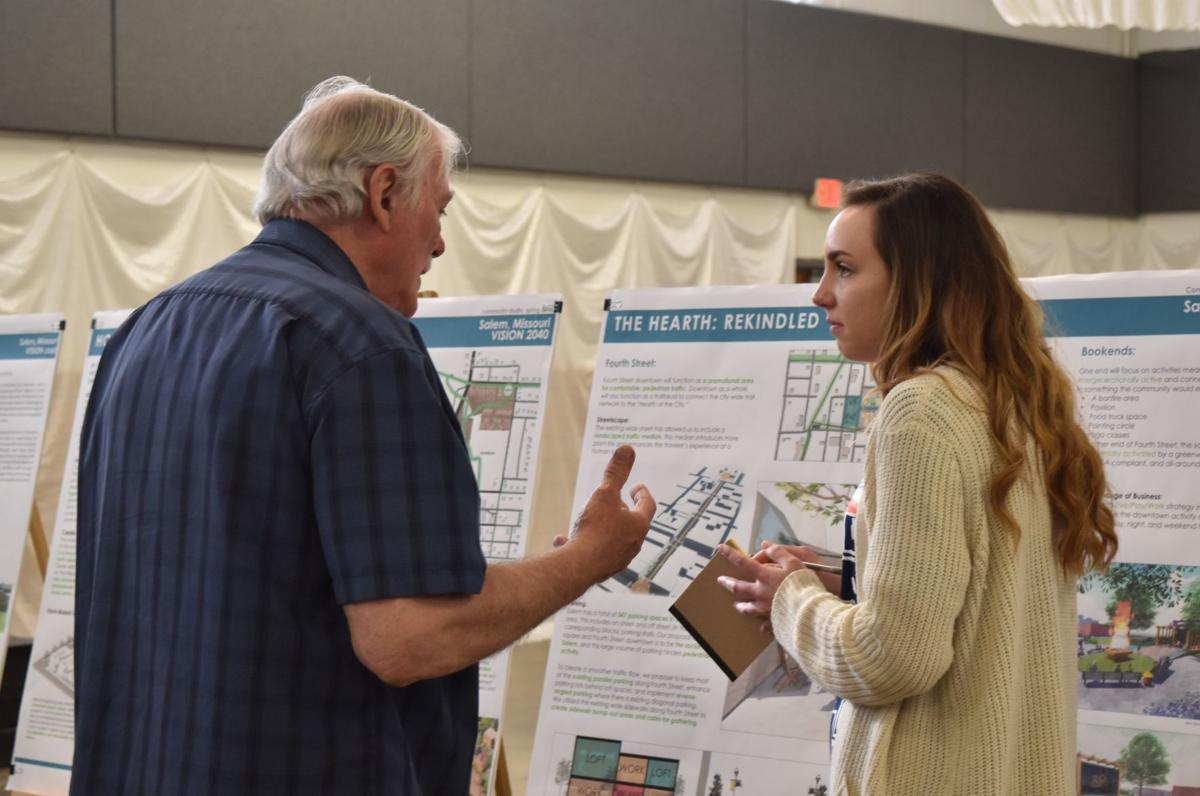 Drury University student Chelsea Crank speaks with a local citizen over their Vision 2040 plan to revitalize the Salem downtown area, as well as the proposal for inclusions of an outdoor amphitheater and park additions. 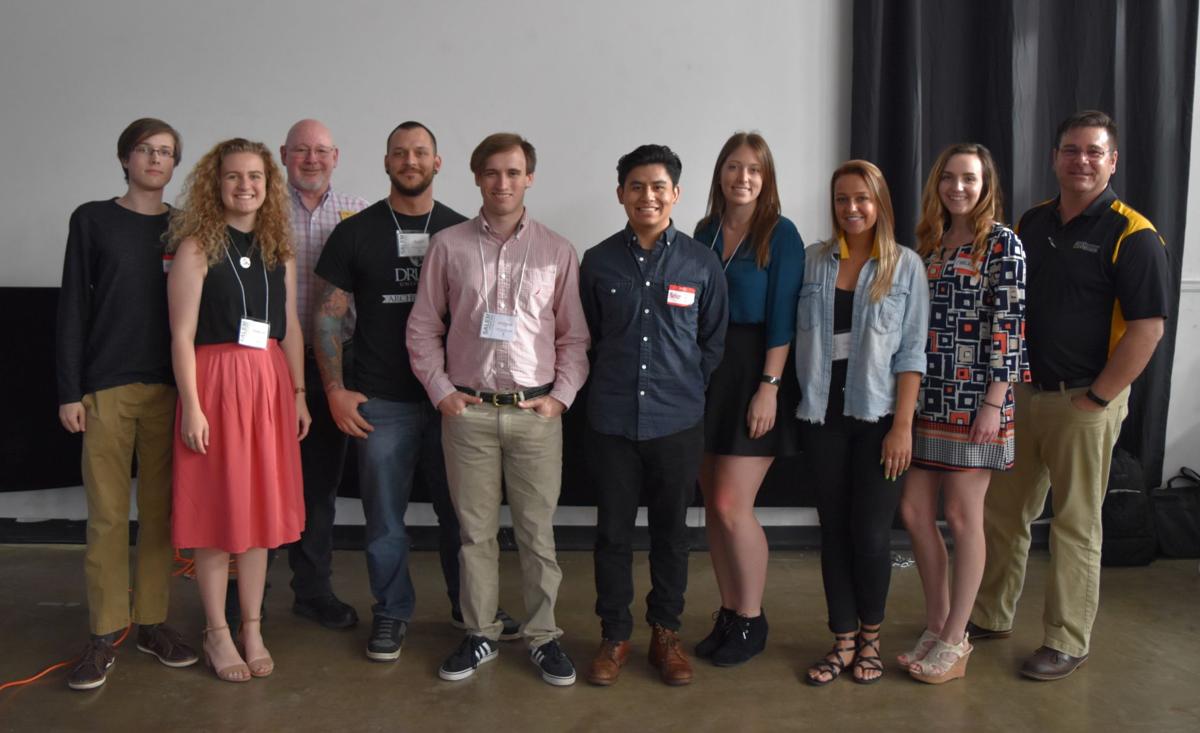 A collection of students and their professor from Drury University, alongside a University of Missouri Extension official, lead the discussions of the 2040 vision of Salem during a Monday meeting. Pictured here are students, from left, Matt Hasek, Morgan Harper, professor Jay Garrott, Blaine Pittman, Nathan Hale, Nelson Zavaleta, Megan Evans, Sydney Pitt, Chelsea Crank and Jeff Barber with the University of Missouri Extension-Greene County. 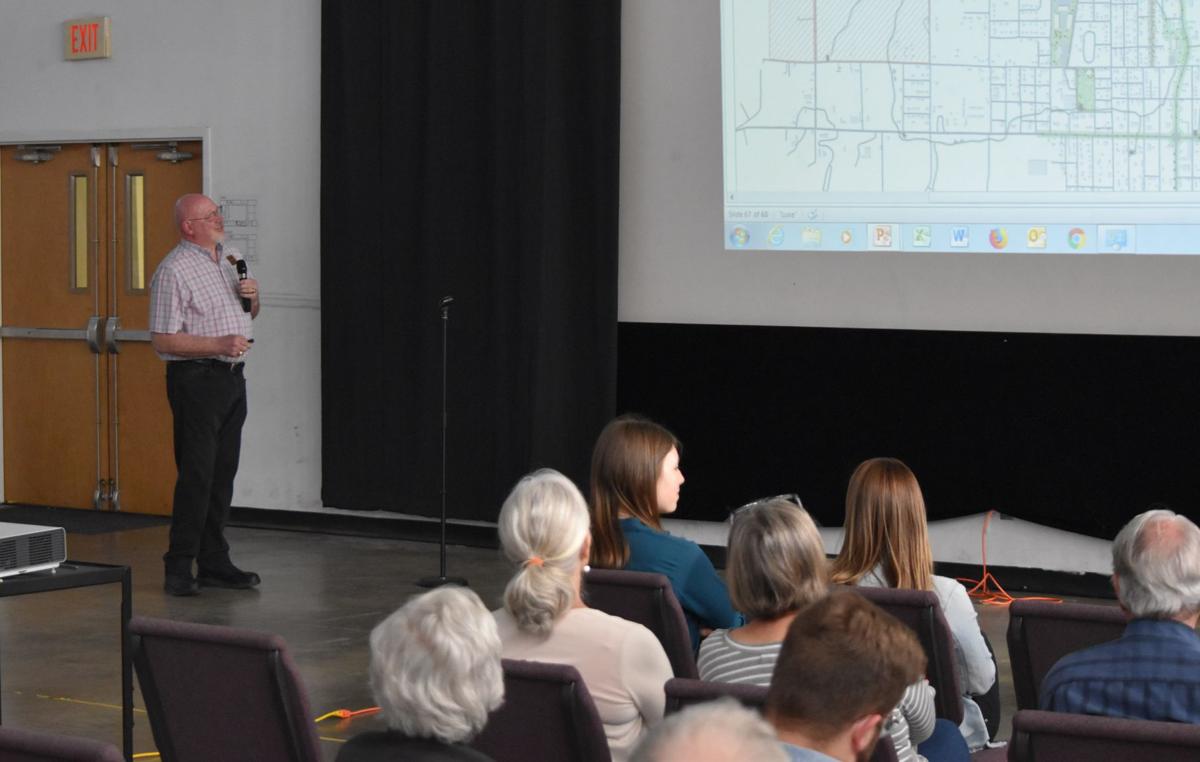 Director of the Hammons School of Architecture and Professor Jay Garrott, left, speaks to an audience of community members over the master plan map that was formulated by the students as part of the Vision 2040 project.

Drury University student Chelsea Crank speaks with a local citizen over their Vision 2040 plan to revitalize the Salem downtown area, as well as the proposal for inclusions of an outdoor amphitheater and park additions.

A collection of students and their professor from Drury University, alongside a University of Missouri Extension official, lead the discussions of the 2040 vision of Salem during a Monday meeting. Pictured here are students, from left, Matt Hasek, Morgan Harper, professor Jay Garrott, Blaine Pittman, Nathan Hale, Nelson Zavaleta, Megan Evans, Sydney Pitt, Chelsea Crank and Jeff Barber with the University of Missouri Extension-Greene County.

Director of the Hammons School of Architecture and Professor Jay Garrott, left, speaks to an audience of community members over the master plan map that was formulated by the students as part of the Vision 2040 project.

The primary student speaker of the night, Drury University’s Matt Hasek, walked the crowd through part of a comprehensive list of suggestions to revitalize Salem and Dent County. The discussion concluded the first portion of Vision 2040, a Drury University class project with a goal of plotting out a vision for the community.

Hasek explained that the first thing the students did to get a feel and sense of the town was to visit it as tourists and spectators of the area.

“This gave us a chance to analyze the issues ourselves and see what we could identify and how we can address those issues,” Hasek told the crowd.

During the trip the students highlighted aspects of the area that could be utilized or utilized further in the future.

“We visited Shawnee Mac (Lake), and we saw that you all have beautiful landscapes,” Hasek said. “There’s a lot of natural opportunities here. We visited Bonebrake, which showed us the historical and cultural value of the town. We also found a culture of art in the town, with the local pride of (bird artist) David Plank.”

With the good, however, does come the bad.

“We saw the old middle school, and the building is in great disrepair. More so than expected originally,” said Hasek. “We also saw a lot of abandoned (buildings), some of which have not been occupied since the 1940s, but they still have the opportunity of use.”

Hasek explained that from the trip the students gathered enough information about the locale to begin development of a plan that would tackle key factors the community wants to improve on, as well as problem areas that needed to be addressed. Identified to the audience were a few of these issues, including what the students call a “stagnant” downtown area, a city-wide issue of aesthetics, a lack of opportunities for youth, weak entry points of access to Salem, a disconnect between city and county and drive-through tourism, which was explained as tourists coming to Salem only for necessities and not its many features.

“We found that all of these things seem to have a commonality, which is that there are under-utilized assets,” Hasek said. “What I mean is that there are assets in place that Salem seems to have that are not being used. For example, you have downtown, and it has the opportunity to thrive. The stores are there, but they are empty. You have the tourism with the landmarks that are around town, but there’s not anything inside drawing them in. There’s all this opportunity that is not being used.”

The issues presented were all addressed in a portion of the student’s master plan. Hasek explained that each section focused on a different key issue in the community that both the students found and issues presented by local participants at previous meetings.

Among the ideas was a revitalized downtown. The reasoning for this, Hasek explained, is to draw both locals and tourists into the center of the town instead of expanding farther westward out of town, which would create a decentralization of community. Drury University Professor Jay Garrott parroted this by explaining the importance of the town not “becoming a donut.”

“We see tendencies of spreading out,” said Garrott. “Have you ever heard of the creosote bush? The creosote bush grows in the desert, and it grows forever…but as it grows, the center dies. It becomes like a donut. We don’t want Salem to become like that. We want to reactive the center by getting as much activity relocated there.”

Also suggested by the students was the addition of housing to the north of the Bonebrake Center. The proposed housing, either apartment-style or townhomes, would be located close to the city center which would further push the revitalization of the downtown area with more business. Connecting all of these new additions would be a collection of node-like parks scattered around town, all connected by trails and walkways that provided both the benefit of accessibility, but also providing a healthier lifestyle for runners and cyclists. These trails would lead throughout the city and out into the county, also helping to alleviate the issue of disconnection between the city and county.

“This is all purely hypothetical,” said Garrott. “These are eight, third-year architecture students. What it is doing, though, is giving you the ideas of what might be possible. It’s giving you the what-ifs to consider.”

University of Missouri Extension – Greene County representative Jeff Barber spoke about how, while the ideas presented by students provide a guideline, the community must put aside their differences to actually achieve this vision.

“If we can all come with our different agendas from our different groups we participate in, and we bring it together and check our egos and agendas at the door and look at what we can have a common vision, that’s the beginning of seeing this through.” Barber said. “The other part is working with your city administration, and to do that in the spirit of partnership. We have old grievances we may want to air out, but that’s not going to help us achieve this long-term goal.”

After the presentation, Hasek stated that the event that can be started the soonest with the biggest effect would be a community effort of downtown cleanup and beautification.

“Starting the clean-up could begin by going into the loft spaces and cleaning those out, with owners’ permission of course,” he said. “Just instilling gardens around downtown and the parks. Projects that are quick but lighten up the area. What that does is raise awareness for the community and gives incentive to do something and be a part of it. People who participate in it will get an interest in the community in a larger sense.”

In an interview with Sarah Hultine Massengale in last week’s issue, she stated that while this meeting may be the last in a series, the process has really just begun for an advisory committee that will take a look at the students’ work. A 250-page book that the students compiled of their comprehensive master plan will be delivered 10 days after this final meeting, and from there the committee will meet and design their own plan to eventually deliver to the city council. City administrator Ray Walden stated during the meeting that the plan would be made public as soon as possible for local input.

“As soon as we can we want to keep the public engaged and keep people aware of (the process),” Walden said. “We don’t want it to be a deal of ‘Well, that was nice, that thing in May but we haven’t heard anything in a year.’ We hope to do better than that. This was a worthwhile exercise with lots of good ideas. We will find a way to engage the community in the next steps and bring any recommendations to the city and county leaders.”