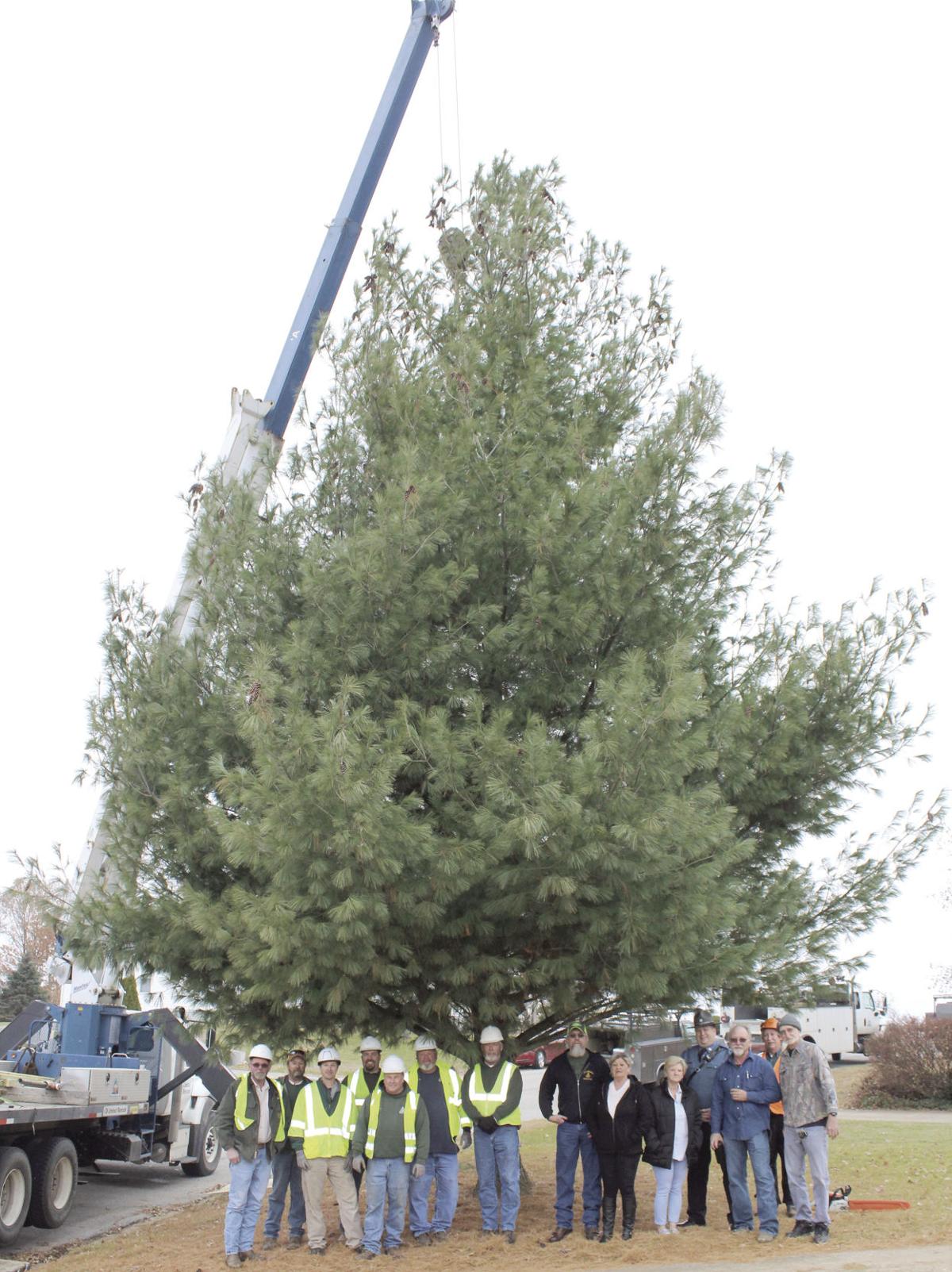 Department of Conservation crew members and some of the spectators, including owners Mike and Ellen Hedgcoth, gather under the tree prior to it being cut down and hauled to Jefferson City. 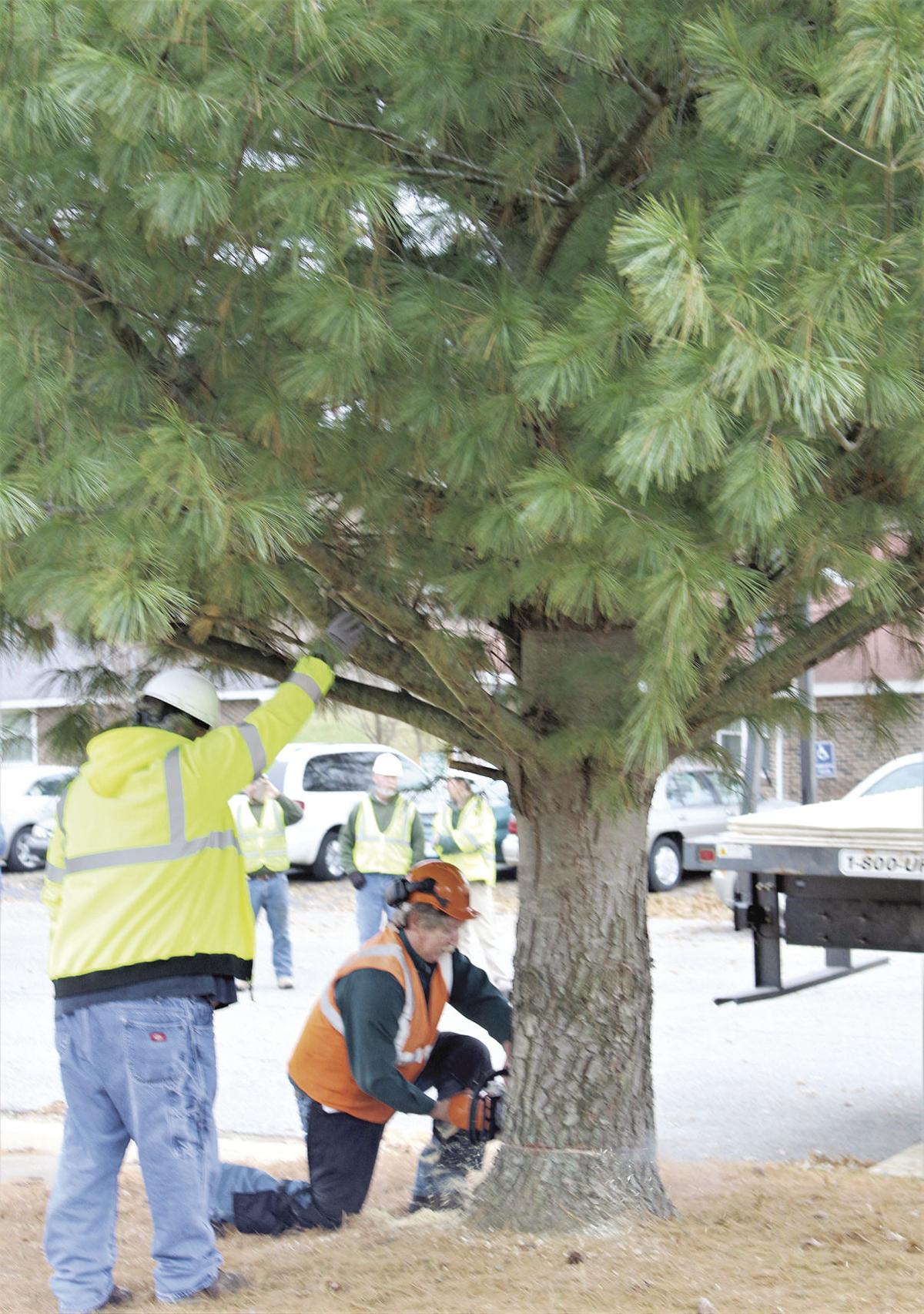 John Hoover of MDC cuts through the trunk of the tree with a chainsaw before it is lifted onto a flatbed trailer with a crane.

Department of Conservation crew members and some of the spectators, including owners Mike and Ellen Hedgcoth, gather under the tree prior to it being cut down and hauled to Jefferson City.

John Hoover of MDC cuts through the trunk of the tree with a chainsaw before it is lifted onto a flatbed trailer with a crane.

Due to recent windy weather, Mike Hedgcoth was concerned about his large, white pine falling across his driveway and was about to cut it down. But thanks to his neighbor and the Department of Conservation, it will adorn the governor’s lawn for Christmas this year instead.

The 30-foot tree was one of two trees selected for display at the governor’s mansion in Jefferson City. Mike and Ellen Hedgcoth, who live on West Virginia Avenue, donated the tree for the mansion lawn, while a 17-foot Norway spruce from the Hermann area will be displayed by the mansion staircase.

The MDC conducts a search each year for a large Christmas tree and asks landowners, homeowners, businesses and communities that may have possible candidate trees to contact the department.

MDC staff coordinates the cutting and delivery of the tree to Jefferson City at no cost to the owner. The Hedgcoths will receive a thank-you from the governor and an invitation to the lighting ceremony, which usually occurs in early December.

An MDC crew with a flatbed trailer and a rented crane were at the Hedgcoth residence the morning of Nov. 26 removing the tree, as neighbors and two highway patrol troopers looked on, most of them recording the event with their smartphones.

“We kind of hated to cut it, but you can see under the pine needles, all the roots are right on top of the ground,” Hedgcoth said. “The last few ice storms were pretty rough on it. I was afraid it was either going to go out in the street or across my driveway.”

He planned to have it removed after the last windstorm before his neighbor, Steve Bramblett, mentioned the MDC search for a Christmas tree and asked if he was interested, he said.

Bramblett said he and his wife, a Salem native, moved back to town in July.

“We were staying here in an apartment until we found a place and got to know Mike and Ellen,” he said. “We were talking and he said he had one tree he had to cut down and then he was going to cut this one down.

“We were talking about how pretty it was, and I had just seen a post from MDC for a governor’s Christmas tree, asking if anyone had anything that would qualify. I made the phone call, took the pictures and submitted them. From the trees that were submitted, this was the one they chose.”

He added, “It was headed for the ditch but this is a lot better plan for it. Maybe it will help get Salem in the Christmas spirit.”

The annual lighting of the tree will take place 6 p.m. Friday, followed by this year’s Candlelight Tours. Doors will be open until 8 p.m. and again on Saturday, Dec. 7 from 10 a.m.- noon.

Preparations for the Candlelight Tours are currently underway. During the tours, visitors will be able to walk through the festively decorated ground floor of the mansion as well as a new Christmas Village on the Mansion lawn.

To qualify, the donated tree had to be about 40 feet tall and be an eastern red cedar, Norway spruce, or white pine that was fully branched on all sides and accessible by large equipment.

The right tree should either be near the end of its life or may need to be removed for other reasons. “Sometimes there are beautiful evergreens that need to be removed for home expansion, utility work, or they’ve grown too large for the space,” said MDC Forestry field program supervisor Holly Dentner. “Having your tree displayed at the governor's mansion is a great way to share its beauty with thousands of Missourians who visit the mansion during the holidays.”