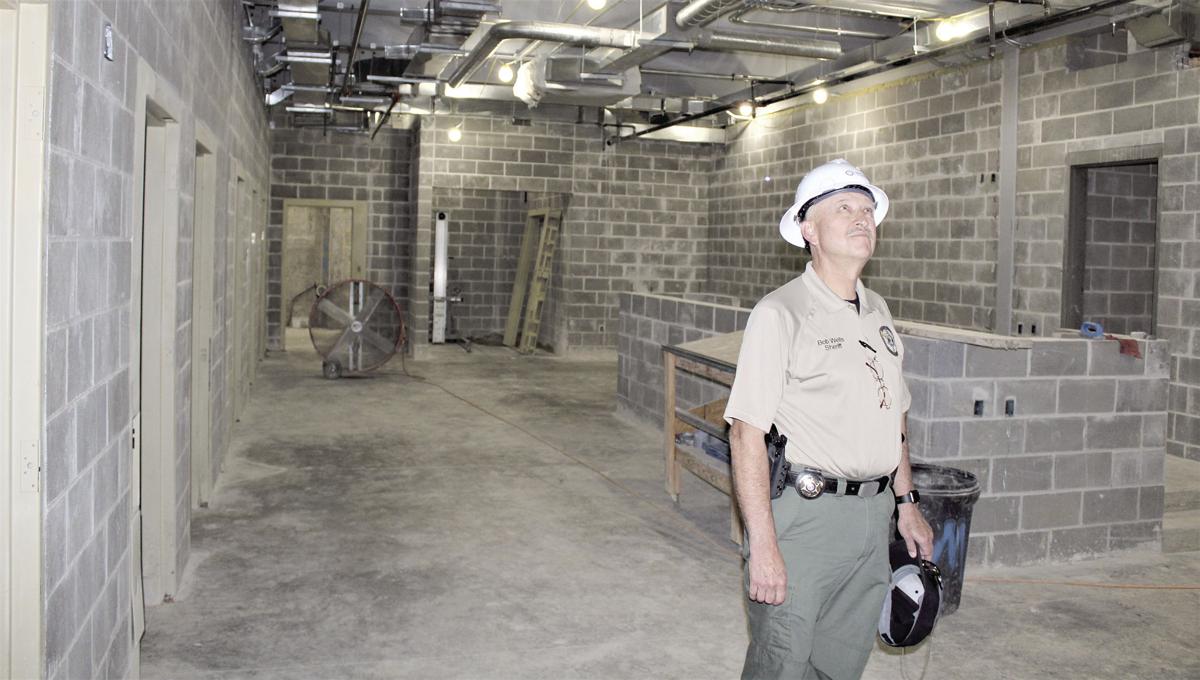 Sheriff Bob Wells looks over the booking area downstairs at the construction site of the new county jail. 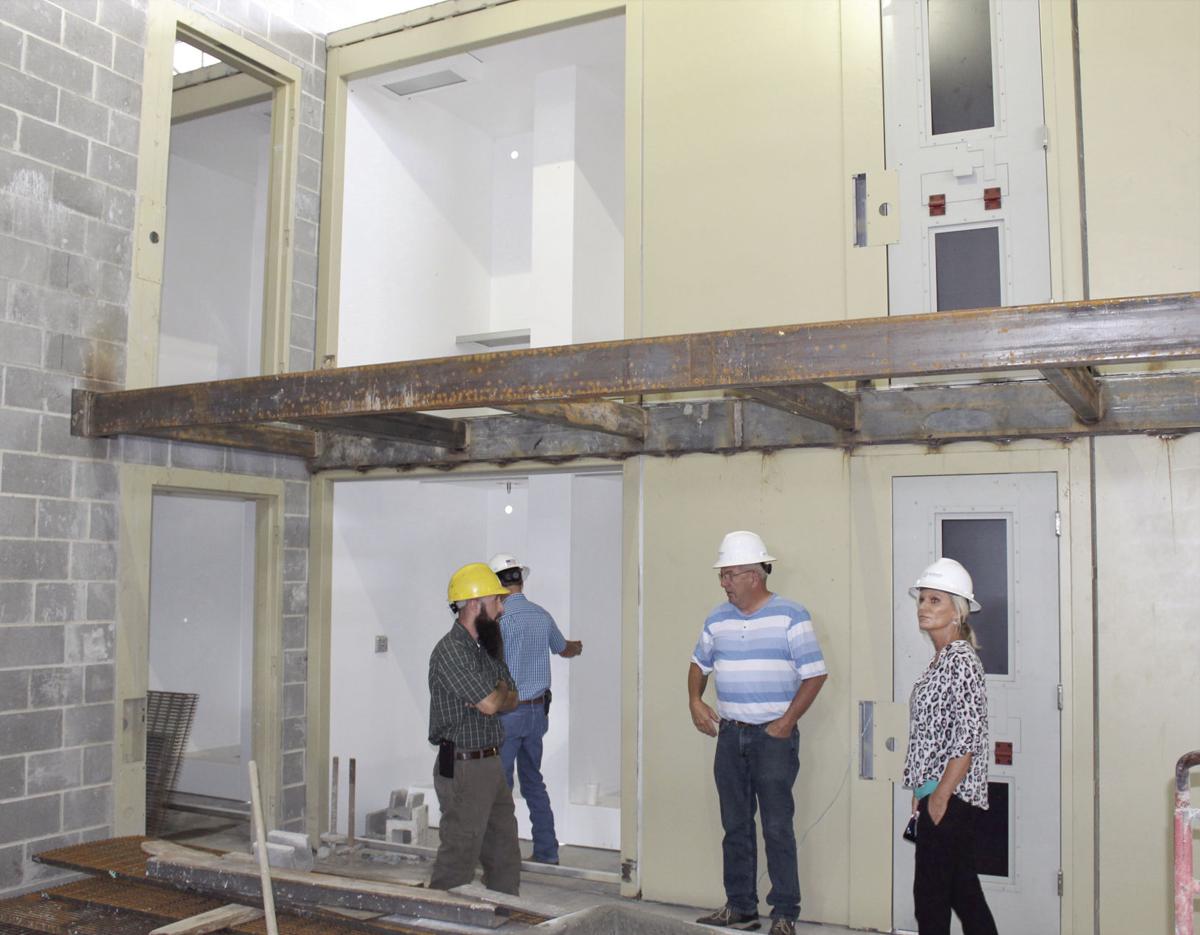 Nick Smith of Septagon, left, explains some of the features of the new jail to Second District commissioner Gary Larson and County Clerk Angie Curley as presiding commissioner Darrell Skiles tours the cellblock.

Sheriff Bob Wells looks over the booking area downstairs at the construction site of the new county jail.

Nick Smith of Septagon, left, explains some of the features of the new jail to Second District commissioner Gary Larson and County Clerk Angie Curley as presiding commissioner Darrell Skiles tours the cellblock.

Improved security is a big part of the new 84-bed county jail going up on Rolla Road across from the sheriff’s office.

The jail will feature state-of-the-art security systems, including expansive video surveillance, thick two-way mirrors on cell doors and a body scanner to prevent contraband from being smuggled in.

The Dent County Commission was updated on the progress of the jail project at its Thursday meeting before touring the construction site with the project manager, architect and members of the sheriff’s office command staff.

Project manager Dwight Ramsburg of Septagon said good progress is being made now that a utility pole that threatened to delay the project has been moved by CenturyLink. But whether the jail will open in December as originally projected remains to be seen.

“Until we get everything completely back to where I can make a full, four-week schedule, I’m not going to make any predictions on how far ahead or behind we are,” Ramsburg said.

CenturyLink crews worked the weekend of July 13-14 at the site before moving the pole July 15.

Prost and Buffington Brothers is roughing in and completing any roof drains and other rooftop systems to allow installation of the roof to begin. Meyer Electric is roughing in concrete masonry walls, installing conduit inside the building and constructing raceways for wiring. Lower level walls are finished except for cleanup.

According to Ramsburg’s report, 95 percent of the structural steel is complete. Noah Detention has placed the cells and is in the process of welding them together. Mezzanine walkways for the upper rows of cells will be assembled next.

Much of the upstairs consists of cells and a control room where doors can be operated and prisoner movements monitored. Cameras are mounted high on the walls where prisoners can’t get at them.

There are five pods of cells in all and a day room. One pod is dedicated to female prisoners. Sheriff Bob Wells hopes to dedicate another pod to housing prisoners from other jurisdictions to bring in additional revenue.

Downstairs are the holding cells, booking area and the sallyport where prisoners enter the building, as well as the kitchen, freezer and walk-in coolers, power rooms and office space for the kitchen.

There’s also a dirty bullpen for prisoners who come in intoxicated, disorderly or violent. It has a drain in case they get sick.

“If people are drunk or wanting to fight, we get them calmed down, then bring them in and book them,” Wells said. There’s also a medical holding cell if they need treatment ,and isolation cells where they can be locked down at night to keep them from fighting.

Nearby is the visitation room where families can come in and visit prisoners, usually by video conference.

“We’re hoping to never have anybody physically come into the jail, where we have to move a prisoner and put him in a room and bring his family in,” said Maj. Len Pabin, chief deputy. “Everything will be done by video or phone. You’ll also be able to visit from your phone at home.”

Next to the large elevated booking table will be a body scanner used to detect contraband carried into the jail in body cavities. It’s particularly useful in stopping weekenders – prisoners serving short sentences like 30 days only on weekends – from bringing in weapons, drugs and syringes used to inject them, Pabin said.

“We can’t do a body cavity search without probable cause or a search warrant,” he said. “Weekenders know they’re coming so they can prepare.” He cited an example of a female prisoner smuggling in methamphetamine a couple of months ago.

“With a body scanner, we can keep all the weapons and drugs out,” he said.

At Thursday’s meeting with representatives of project management firm Septagon and architects Shive Hattery, commissioners approved change orders for a phone and video interaction system, and devices to support them including charging stations and wireless routers, at a cost of $15,196 to Meyer Electric.

Funding for the purchases comes from the $331,000 contingency still remaining in the jail budget. More will be set aside once another round of bond sales is complete, Septagon officials told commissioners.

So far, $7.6 million in bonds have been sold for the $12.8 million project. Another $5.2 million will be sold in the coming months.

“I think we’re sitting pretty good on the contingency,” Nick Smith of Septagon said, with a $500,000 allowance available for furniture, fixtures and equipment also helping fund the phone system, additional monitor and body scanner. “The additional bond sales will also kick the contingency up and give us more room to work with,” he said.

• An exterior stair, ramp, wall and handrail changes by Prost Builders at a cost of $35,619, down from $93,165 on the original bid that has been revised several times.

• Exhaust fan revisions to bring the installation in line with industrial duct construction standards at a cost of $8,597. Similar changes were required at two other work sites due to the regulations, officials said.

• A $17,912 credit back to the county from Prost Builders from rerouting the grease duct from the roof to the east wall of the mechanical room.

• Ameren relocating a gas main on the north side to allow construction of the new building. About 230 feet of gas main are being moved at a cost of $14,870.

• CenturyLink plans to relocate 100-pair buried cable required for the new building to poles north of the site and has submitted a negotiable price of $29,850. Meyer Electric is installing two three-inch conduits from the CenturyLink poles to a point inside the building at a cost of $3,753.

• Monitors to be set up in the dispatching room, deputy room and the office occupied by the sheriff, allowing officers to watch activity inside the new jail. The cost is $13,347 for the first unit and $9,965 for each additional unit from Noah Detention plus $14,595 for wiring and installation costs from Meyer Electric.

• A panic button alarm system to quickly summon deputies across the street if problems arise suddenly in the new jail. Pricing is still being determined.

Column on the end of Topix most-read story of 2019

News stories on crime and crashes are always the most-read stories on our website, but instead of rehashing those here are the Top 10 non-crime and accident stories from 2019 on thesalemnewsonline.com: