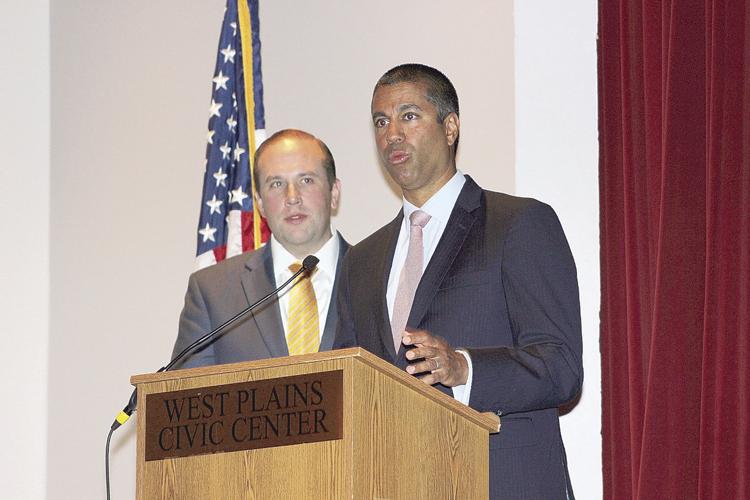 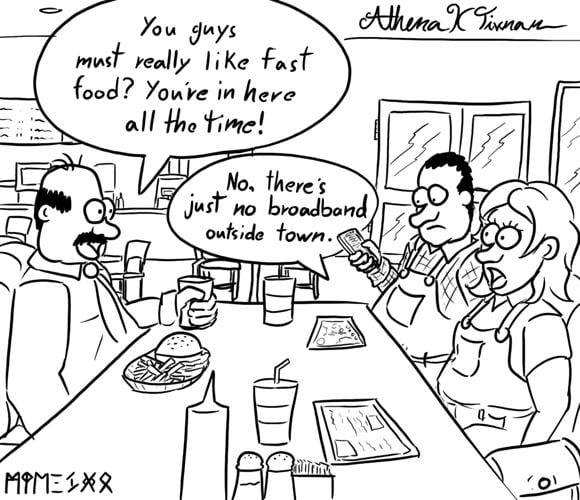 Editorial cartoon for The Salem News.

Editorial cartoon for The Salem News.

Its panel features leaders who spoke about the rural Internet struggles from the perspectives of business development, education and agriculture. During his introduction, Smith said his district ranks last in Missouri in terms of Internet speed, number of providers and technologies available. Nationwide, he further reported it ranks 407th in the percentage of population with access to the FCC minimum broadband download speed of 25 megabytes.

Smith said he was holding the roundtable in West Plains because of the 18 counties in his district where more than half the population doesn’t have the minimum broadband speed, 15 are west of Highway 67. He cited zero percent of Shannon County’s population as having the minimum speed. Ozark County’s recent stat was .1, Reynolds County .8 percent, Carter County 2.8 percent and Oregon County 14.2 percent. He later pegged Dent County’s rate at 53 percent.

Pai told the audience rural broadband improvement is the No. 1 issue at the FCC and will be addressed through federal subsides, regulatory reform and working with elected officials.

“To me broadband in rural American is not a Republican issue or a Democratic issue, it’s an American issue,” Pai said. “One of the most inspiring books I’ve ever read was Robert Caro’s biography of Lyndon Baines Johnson. In the first volume, Passage to Power, he talks about the rural electrification effort of the 20s and 30s in Hill County of Texas. If you look at how the Hill County was transformed when electricity went through some of those parts of the country that had been written off - it is night and day. To me, digital infrastructure and broadband is the 21st century rural electrification project. That is the issue of our time, and certainly the issue I’m going to be focused on.”

Pai also said he personally empathizes with the plight of rural America, having grown up in Parsons, Kansas, a town of around 10,000 people located in the state’s southeast corner.

“My graduating class when I graduated from high school was 110, today it’s about 75 and dropping,” Pai said. “Part of the reason why young people are leaving is they sense there’s not as much of a technological future in our small town. They would much rather move to Kansas City or Wichita, some of the bigger cities where they sense they have a chance to succeed in the digital future.”

Neither Smith nor Pai was able to provide details on how to tackle the issue beyond a broad vision for the future. The Salem News asked both if grassroots efforts like last year’s Salem Initiative would directly benefit from federal initiatives. They each said it’s too early to know.

Pai told The Salem News he hoped funding to expand broadband would be included in a federal infrastructure package which has been promised by president Donald Trump to be forthcoming. Pai said he didn’t know when Trump would unveil his plans. In terms of funding, Pai deferred to offer specifics on the scale required to accomplish the goals, instead pointing to Smith and saying it would be up to Congress to decide.

Smith also said he could speak to how much funding would be provided, but did say he thought rural broadband expansion may be part of the tax reform bill once it returns from the U.S. Senate. He said he didn’t want to put a timeline on when the bill would be brought to the House Ways and Means Committee, on which Smith serves, but hoped it would be before the end of the year.

Colin Collins, a Wayne County farmer, spoke on behalf of agriculture. At one point he held up his cell phone and declared the device was one of the greatest advances for farming in his life, but only if it has a signal. Wearing a tee shirt and coveralls, Collins further explained a farm emergency prevented him from donning appropriate attire. He cited the circumstance as demonstrative of the day’s issue.

“We envision a time when we can actually find our cows by not actually having to go out and see them physically,” Collins said. “Like this morning, one reason I’m looking like this, is because we had some cows break through a fence and head for the highway. We didn’t know it until a neighbor called.”

Superintendent Wayne Stewart of the Glenwood R-VIII School District highlighted that many rural schools have been able to obtain quality internet; however, their students don’t have the same capability once they return home.

Loyd Rice of the SEMO Electric Cooperative said the company intends to offer one gigabyte service to its rural customers due to demand.

“It’s not an option any longer for us to kick the can down the road, we have to figure out how to do this,” Chinn said. “The sky is the limit out there for the abilities out there for agriculture and small businesses, we just have to be able to tap into them.”

During the ensuing questions, Howell County Presiding Commissioner Mark Collins addressed the rural broadband round table on the subject of lost tax revenue for local jurisdictions due to online sales. He urged the leaders to consider the issue as also important to rural communities.

Several questioners also lobbied Pai to oppose the FCC’s consideration of dropping the broadband minimum to a 10 megabyte download speed.

Dozens of people showed up at Salem High School Saturday afternoon for the dedication of Bill Schuchardt Stadium. Most everyone in Salem knows about the Schuchardt football era, which was the best the hometown Tigers have ever experienced and among the best, ever, in Missouri.

Back in the 1980s and 90s when I was a rookie sports writer at the Columbus (Miss.) Commercial Dispatch and later a sports editor and columnist for the Clarion Ledger in Jackson, Mississippi, high school football gave me some cherished memories. One of the things I enjoyed – and remember – m…