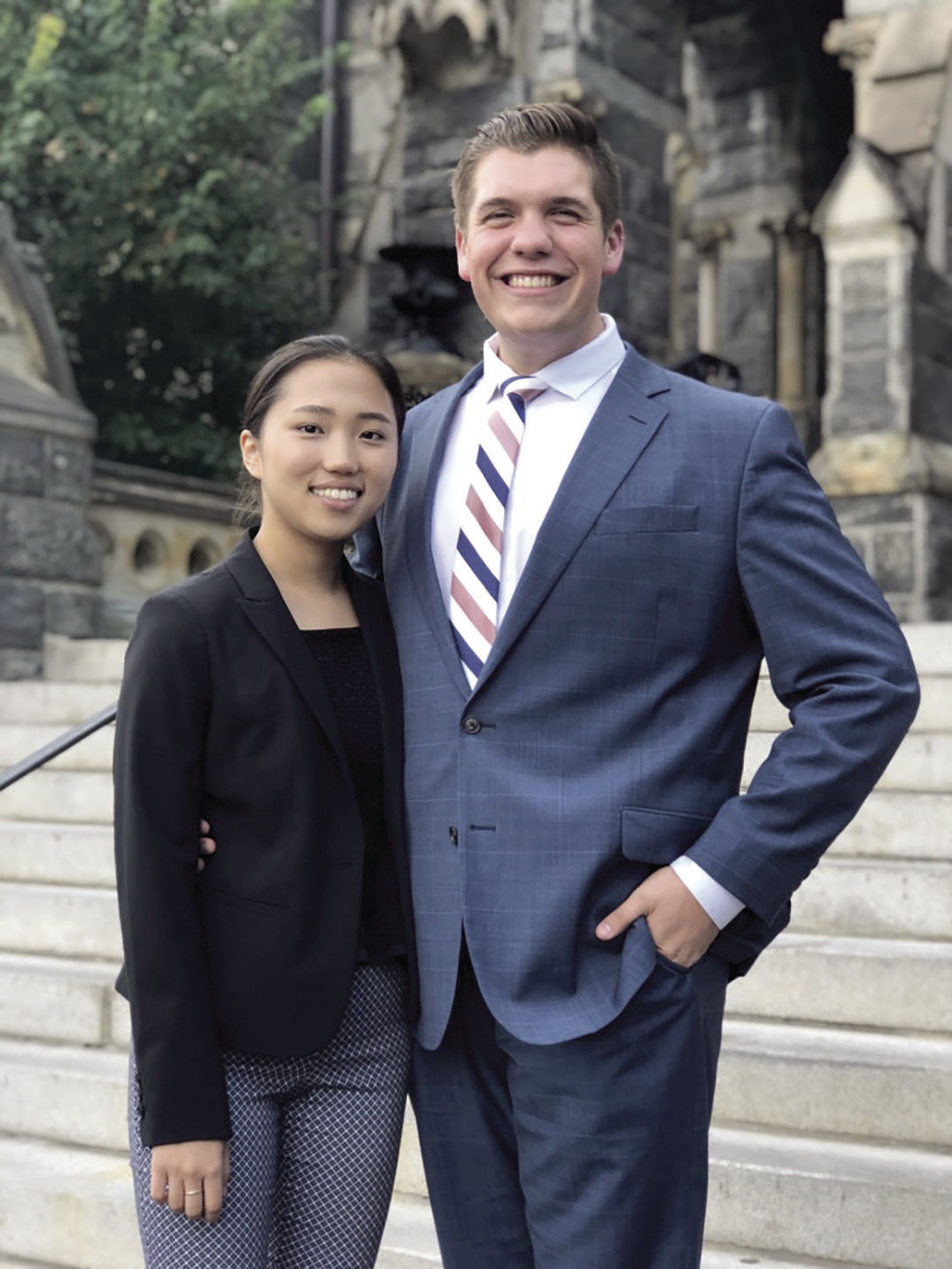 Josh Sirois and Seo Young Lee, who served alongside Sirois at Georgetown University. 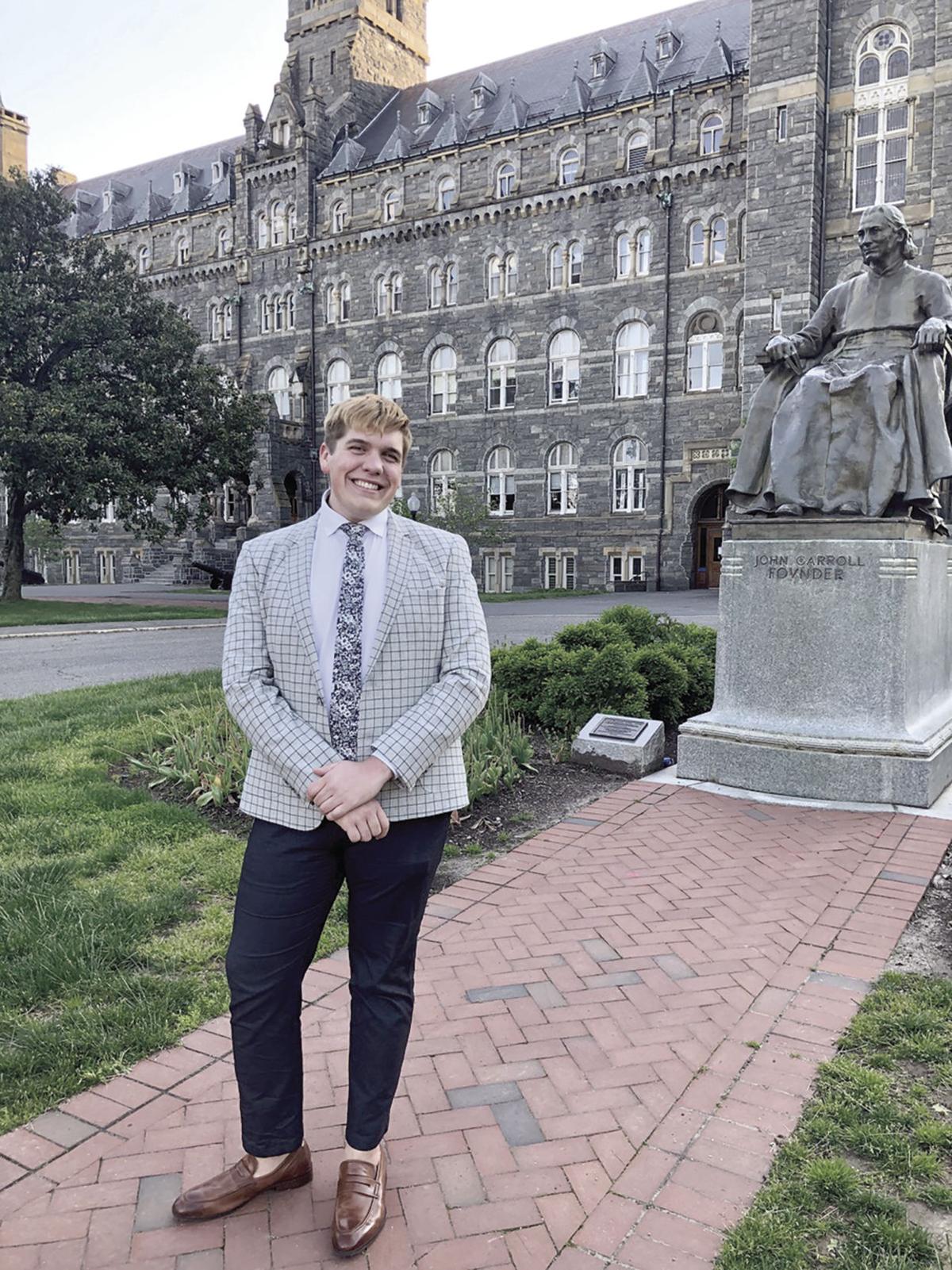 Josh Sirois graduated from Georgetown University in May.

Josh Sirois and Seo Young Lee, who served alongside Sirois at Georgetown University.

Josh Sirois graduated from Georgetown University in May.

Josh Sirois is no stranger to success, as evidenced by his work at Salem High School, earning a seat as valedictorian in the graduating class of 2016, among other accolades in academics and chamber choir. He received honorable mention as a student in the 2016 Missouri Scholars 100, a statewide program that honors 100 of Missouri’s top academic students each year. In addition, he was honored by Salem Area Community Betterment Association and Meramec Regional Planning Commission for his volunteer service in the community.

Sirois attended Georgetown University and recently graduated with a Bachelor's of Science degree in Foreign Service from the university's Walsh School of Foreign Service. Georgetown is a private university in Washington, D.C., founded in 1789. It is touted as a highly-selective school, accepting about 15 percent of undergraduate applicants. Sirois majored in Global Business and minored in Women's and Gender Studies. He was awarded the Martha Swanson Outstanding Senior Leader Award, given to only five seniors at the university. He served as chair of the board of directors of the Students of Georgetown Inc., the chair of the Council of Advisory Boards, and a Blue and Grey tour guide.

“Some of my favorite times were exploring the hidden gems of the city,” said Sirois. “I loved late-night walks with friends at the National Mall, and the many cultural cuisines of the melting pot that is D.C.”

Sirois also continued nourishing his love of music by taking part in the acapella group, Georgetown Superfood. The group, comprised of males and females, competed in ICCA competitions twice while Sirois was in the group. His freshman year the group won the quarterfinals.

Sirois was recently selected as a Fulbright Scholar for the coming year, and accepted an offer to pursue an English Teaching Assistantship in Spain’s Canary Islands. He will be teaching in Spain from January-June 2021.

Proficient in Spanish after studying it for six years, Sirois attended a teaching program in Panama after his freshman year at Georgetown. While teaching in Spain he plans to volunteer with organizations that assist students in applying to colleges in order to give back and further immerse himself in the local community and culture.

Following his return from Spain, he has committed to work as an analyst with Citibank’s Treasury and Trade Solutions division in New York City. Sirois interned in the Manhattan headquarters of Citibank in the summer of 2019.

“I knew I wanted to work in a finance-related field, and have always dreamt of living in New York City,” said Sirois. “We went to Carnegie Hall in high school, and it solidified my decision to want to be in New York City.”

Sirois will be in St. Louis until his time in Spain. He plans to work in financial services with TD Ameritrade.

The Fulbright application process began in September 2019 for Sirois. He was not notified of his acceptance until late April. Georgetown University hosts an internal review process for its students. From that point forward, the application goes through several vigorous levels of review, and then is ultimately accepted or denied.

“The program was founded by United States Senator J. William Fulbright in 1946 and is considered to be one of the most widely recognized and prestigious scholarships in the world,” states the Fulbright website. “The program provides approximately 8,000 grants annually – roughly 1,600 to U.S. students, 1,200 to U.S. scholars, 4,000 to foreign students, 900 to foreign visiting scholars, and several hundred to teachers and professionals.

“In 1945, Senator J. William Fulbright introduced a bill in the United States Congress that called for the use of surplus war property to fund the 'promotion of international good will through the exchange of students in the fields of education, culture, and science.’ On August 1, 1946, President Harry S Truman signed the bill into law, and Congress created the Fulbright Program, the flagship international educational exchange program sponsored by the U.S. government.”