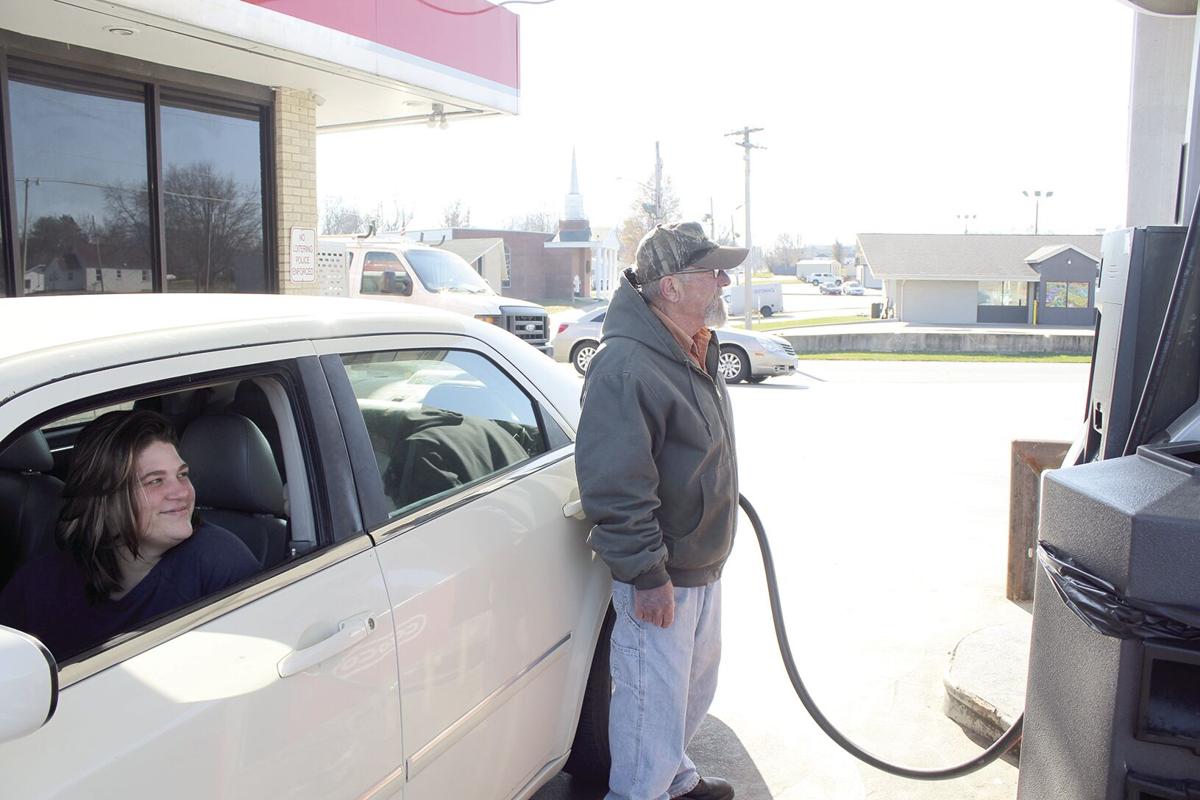 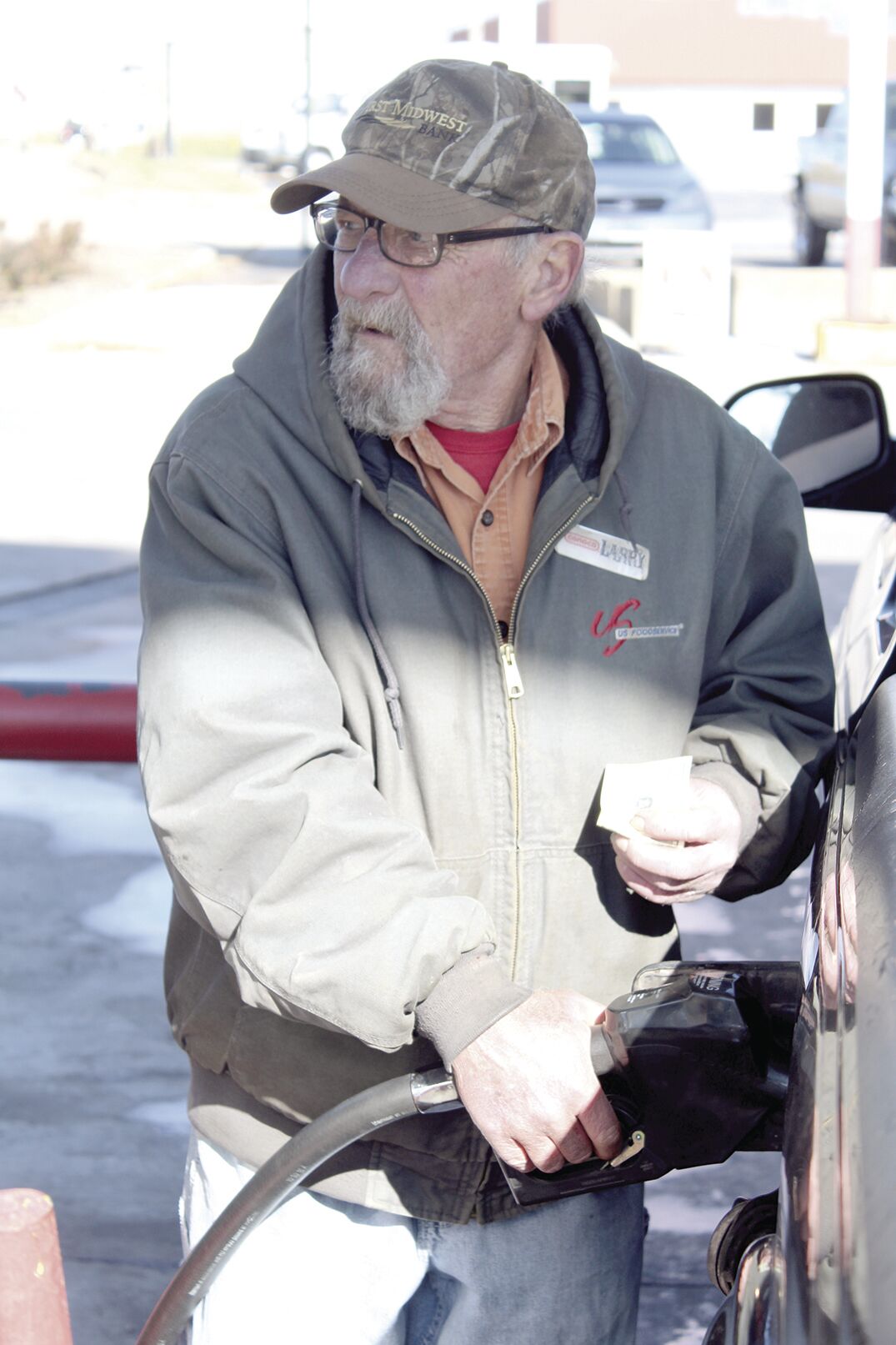 Larry Dallas pumping gas at Phil-Mart during his shift. 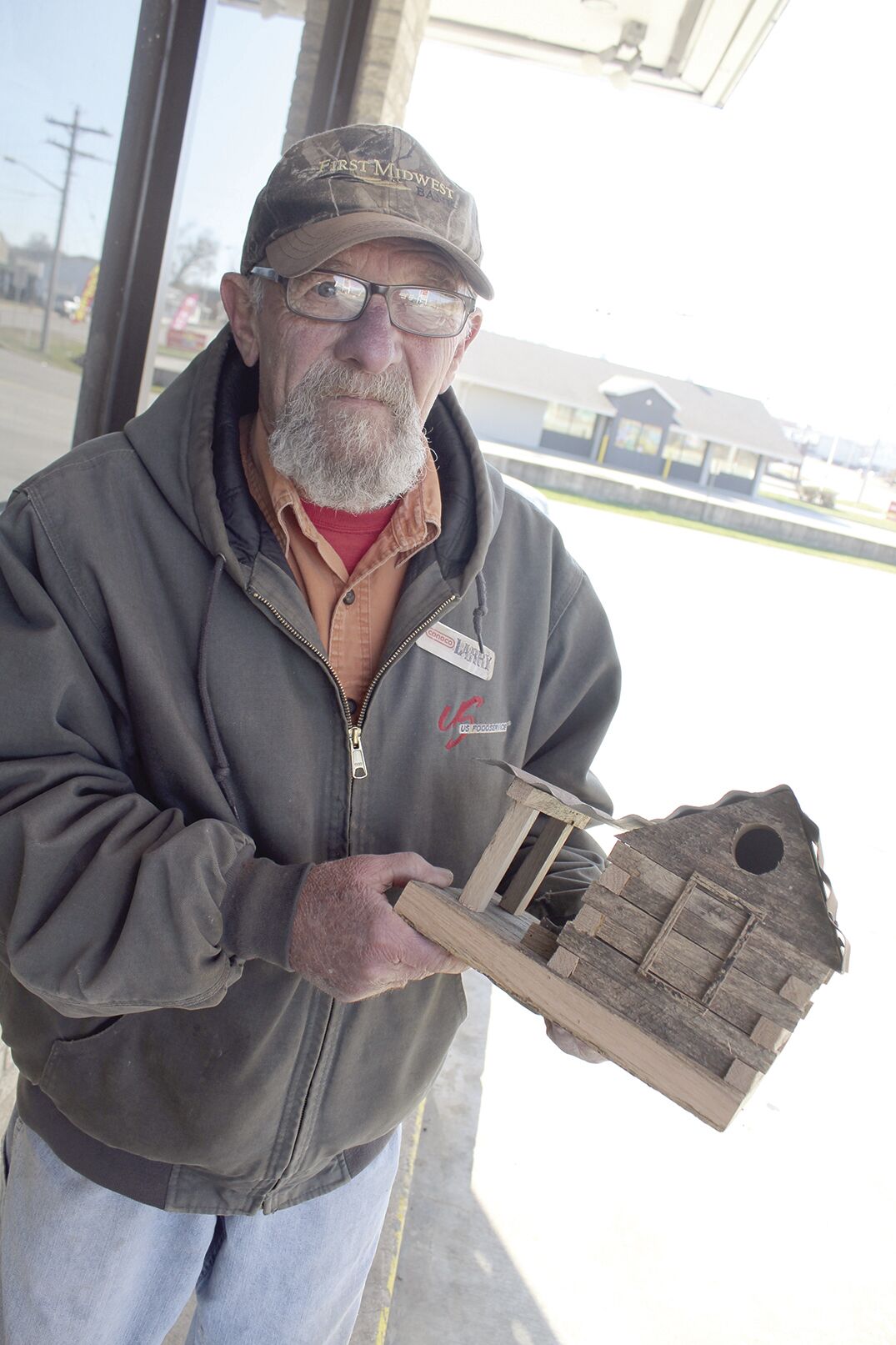 Larry Dallas holding one of his bird houses that he makes from salvaging material from old barns. 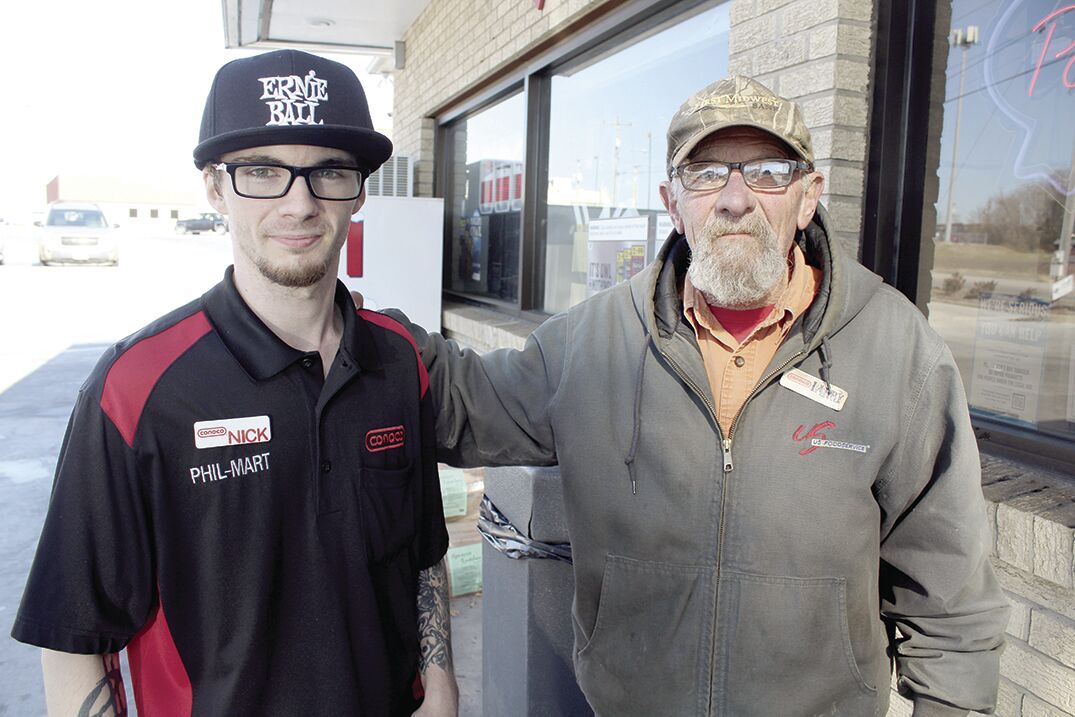 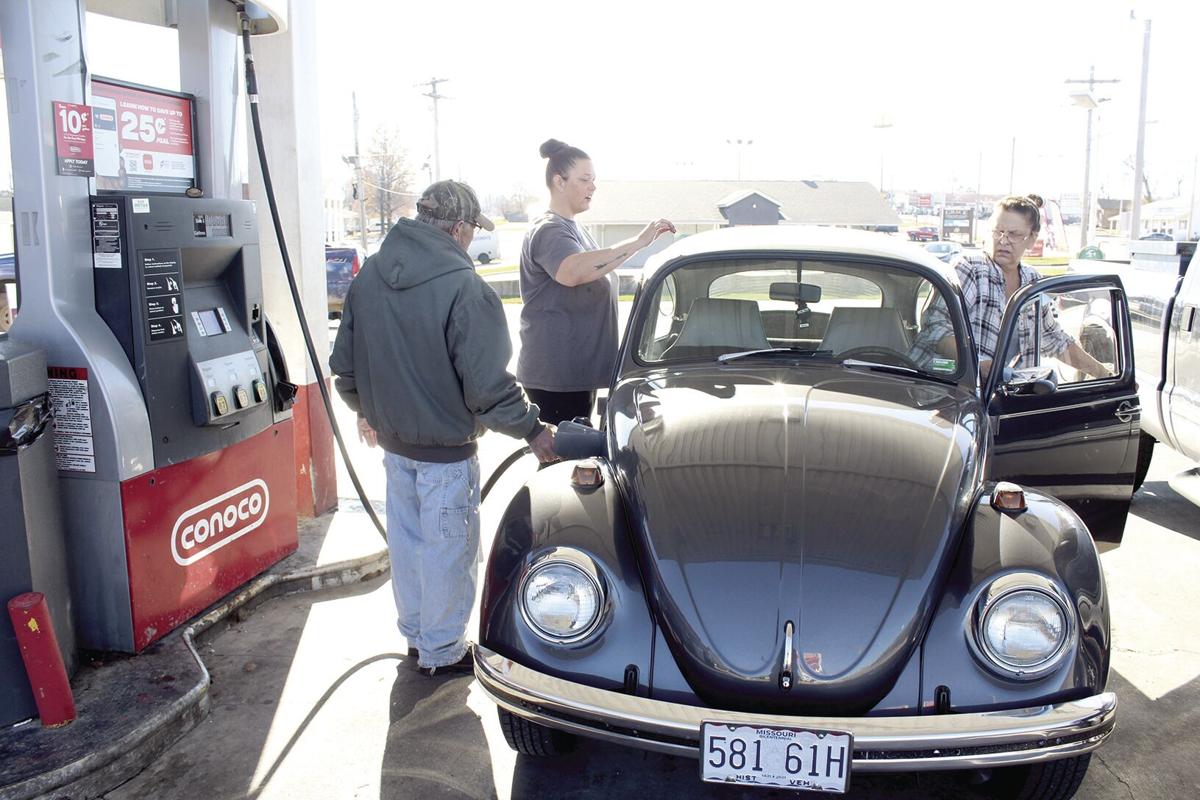 Larry Dallas greeting regulars, Michelle Nelson and Lori Southards as they arrive at Phil-Mart. The vehicle pictured belonged to the late Eugene Southard who passed away in August.

Larry Dallas pumping gas at Phil-Mart during his shift.

Larry Dallas holding one of his bird houses that he makes from salvaging material from old barns.

Larry Dallas greeting regulars, Michelle Nelson and Lori Southards as they arrive at Phil-Mart. The vehicle pictured belonged to the late Eugene Southard who passed away in August.

It is a feature peculiar to Salem, that a gas pumper can still be encountered when one goes to Phil-Mart on Main St. Larry Dallas is a familiar face to many people in town as the last gas pumper in Salem, Dent County and probably anywhere close by. Larry can be found at Phil-Mart Monday, Wednesday, and Friday mornings from 7:30 – 11 a.m.

“Larry is a good guy and people love him,” said Daniel Salyer who manages Phil-Mart—his family purchased Phil-Mart from the Chiltons 22 years ago.

November marked Dallas’ fifth year on the job at Phil-Mart. Previously, Dallas worked at Gas Plus on Rolla Rd. as a gas pumper, but when it closed down he was left without work.

Originally from St. Genevieve, Dallas and his wife Dawn-Starr moved to Salem about nine years ago. Dallas has been a blue-collar worker his whole live. Before moving here, he worked a number of years for Illinois-Missouri Railroad and MFA Oil as a driver.

That kind of work eventually came to be too much for Dallas.

“I’ve had three heart attacks and nine stents,” he said. “I’m 73 years old. I had my first heart attack at 46 and my second one exactly 10 years later.”

“I usually made it down to Montauk to fish two or three times a year, so my wife said we should just move down here,” he said.

Soon after arriving in Salem, Dallas got a job as a gas pumper at Gas Plus when it was still open on Rolla Rd., where he worked for almost two years before they closed.

That’s where he first worked with Melvin Griffith who pumped gas there and later at Phil-Mart—who started working at Phil-Mart before Dallas. Griffith passed away this summer. “He was a good guy to work with,” said Dallas. “He used to work mornings and I worked the afternoon,” he said. “After he got sick, I took over the mornings.”

“It wasn’t more than a week later after Gas Plus closed I had a job working for Steve Wells (Wells Package & Gun),” he said. “Steve’s a great guy,” said Dallas. “But it wasn’t for me.” Dallas also used to do maintenance work at the Salem Public Library.

According to Dallas, neither job was really his cup of tea.

“I’d much rather be working outside,” he said. “The cold doesn’t really bother me, I can always put more layers on; it’s the heat that does me in.”

His regulars know that when he’s not pumping gas for customers, he’s waiting cheerily next to the door to greet anyone who visits Phil-Mart during his shift.

“I guess I’ve become a bit of a fixture around here,” he said. But every once in awhile, out-of-towners will visit the gas station and are surprised to find a gas pumper still on staff. “Some of them are shocked—blown away. They look at me like I’m crazy,” he said.

“I really appreciate it,” said Bonnie Parks, a local widow who appreciates not having to get out pump her own gas. “Larry always does a good job,” she said.

“I love Larry,” said Danielle Payne, who said she tries to fuel up when Dallas is working. “We’re like family,” she said.

“Larry is an amazing guy,” praised Michelle Nelson, another one of Dallas’ regulars

It seems that everyone is happy to see him—you’ll hear barrage of hellos, howdys, how are you doin’s, and have good days fired back and forth between the friendly Dallas and the customers coming and going to and from Phil-Mart all morning.

“I’ve worked with Larry since he started,” said Christi Blackwell, a Phil-Mart employee. “He’s always been great to work with,” she said. A sentiment echoed by Nick Hopkins, who Dallas pointed out he can always rely on to pump gas for some of the regulars who don’t pump their own gas.

Additionally, he often has a birdhouse made from barn-wood and with an old piece of tin or steel as a roof.

“That’s my other job,” said Dallas. “I’ve always liked to work with my hands,” he said. “Somebody will let me know that they have an old barn that’s blown over or not used anymore,” said Dallas, then he will go and reclaim the materials.

“This one that I have here, somebody was supposed to pick up this morning,” said Dallas. “But I’ll get with them later, I guess.”

According to Salyer, Phil-Mart plans to keep pumping peoples’ gas.

“A lot of our customers really appreciate it,” he said.