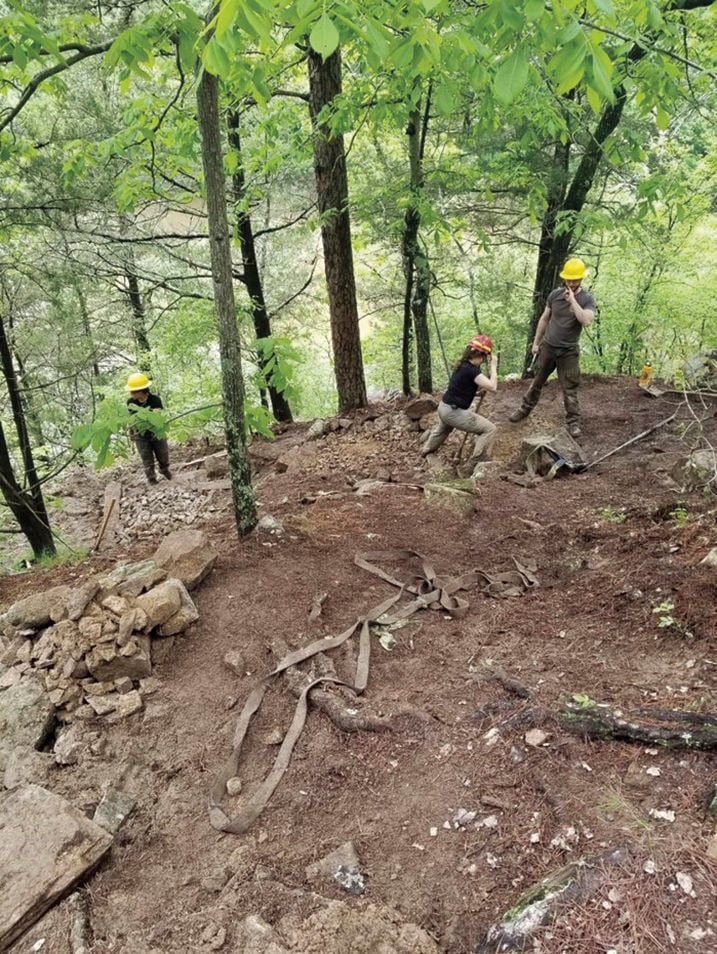 Young lady from White Mountain Trail Crew (Enterprise) levering rocks into place for check steps on Turkey Creek Trail; in the foreground you can see the block and tackle pully system laid out. This portion of trail goes to the dam and was completely washed out.

Young lady from White Mountain Trail Crew (Enterprise) levering rocks into place for check steps on Turkey Creek Trail; in the foreground you can see the block and tackle pully system laid out. This portion of trail goes to the dam and was completely washed out.

The Forest Service began building trails in the 1890s when the national forests were first set aside as forest reserves. Those trails were not the scenic walks we have today but designed as the quickest way between two points and built primarily for firefighting or delivery of materials. At the time, recreational use of trails wasn’t really the leading thought process.

In the old days, before GIS and cellphones, Forest Service trails were the means of communication between remote stations. Mostly done on horseback or by foot, employees and volunteers moved from tower to tower during fire season or delivered goods to work crews and caught up on any news. In 1968 the National Trails System Act was passed. It established four major trail systems, national recreation trails, national scenic trails, national historic trails, and connecting or side trails. The Appalachian Trail and the Pacific Crest Trail were named as the first national scenic trails. Since then, trails have been built and added by the thousands.

From 2015 through 2017 the Mark Twain National Forest experienced several flood events that decimated a large portion of their diverse trail system. Some were completely washed out, while most had minor damage and debris. During my internship with VetsWork/ Mt. Adams Institute and the Mark Twain National Forest Supervisor’s Office, I had the opportunity to see trails being rebuilt from this damage. I oversaw tracking the progress of trail restoration and associated budgets. I had to get up to speed, not only on the federal program that was utilized to repair the trails known as ERFO, short for Emergency Relief for Federally Owned Roads, (which was run by the Federal Highways Administration), but also on trail building itself…what was its purpose and how was it done? I guess I never really thought about it.

Things have come a long way since trails were created as supply transport lines, but at the same time, the building processes themselves are as old as mankind. I set out to meet our White Mountain Trail Crew at Silver Mines Recreation Area near Ironton, Missouri on March 3, 2019.

After meeting Mr. Mike Benson the crew leader, I settled down to read his Forest Service guide on information on cutting check steps and other trail bases and watched the crew create some by hand on a steep washed out section leading to the St. Francois River Dam.

The White Mountain Professional Trail Crew was founded in 1919. Trail Crews then only patrolled trails while chopping out blow downs and maintaining the trail corridor. Today with high use, steep graded trails, and high annual rainfall many trails suffer from severe erosion. The Professional Trail Crew has trail construction skills and engineering techniques that help keep erosion at bay. They installed drainage structures to get water off the trail and rock steps that created a hard and durable trail surface. The crew, consisting of five people, are stationed in and patrol the White Mountain National Forest of New Hampshire, but often take on projects that require their expertise on other National Forests. Rock work is a specialized skill and very few crews have the knowledge to deal with more complex trail building.

Mike discussed how trail building was kind of a mix of engineering, recreation knowledge, art, and common-sense rock work. You either love it, or you hate it. It’s strenuous, but the result is beautiful; and of course, functional. His genial manner and sheer plethora of expertise got me riveted in an instant. It was fascinating. Many times, as I have blindly tromped down trails, I know I never thought about the people who built them, who crafted the turns, the switchbacks, and steps…and why. I never regarded the subtle upsweep of land as a hidden retaining wall that was created to keep hikers safe and to keep the trails there for generations to come.

For my part, I was able to sit down and crush medium sized rocks and boulders into smaller, fist-size rip-rap that could be used as a base for check steps. I used a small sledgehammer and made two check step bases in about an hour. I learned about setting “gargoyles” which are rocks placed in random, jagged and upright positions along the edge of the steps. Hikers sometimes try to avoid steps, hiking around them, which then causes excessive wear to the sides of the trail and leads to rutting; so the gargoyles help keep hikers on the steps, preventing damage.

Throughout the day I watched Mike and his crew use pulaskis, pick mattoxes and other trail tools to lever stubborn boulders taken right from the immediate area to craft and create a usable, sustainable trail. To move large boulders, the small crew of 3 men and 2 women worked with grip hoists, a pulley system, and rock bars. They were easily able to pull 500 lb. boulders upslope to be set. They used materials from the hillside, never having to bring in man-made or trucked in supplies. I was surprised at how hard they labored, and yet kept up a running conversation and joyful demeanors.

The work they accomplished in a short amount of time was remarkable!

• Re-established about 300 feet of spur trail to viewpoint

• Installed about 120 feet of side ditch

• Hardened 40 feet of trail with crushed rock and soil

When you’re out walking the trails, remember that a few enterprising folks shed blood, sweat, and tears to craft that beautiful walking space out of nature for your enjoyment!

As Mike said it best, we just don’t seem to think about that “Art beneath our feet!”

If you ever get an opportunity to do some trail building, get in there, crush some rock and check it out!

“Kim has just completed her VetsWork internship on Mark Twain National Forest. Her efforts were primarily focused on recreation and geographic information systems. Kim’s love for the outdoors, her military experience, and her dedication to serving the public were a great benefit to the public and our forest!” Sherri Schwenke, Forest Supervisor Mark Twain National Forest.

Column on the end of Topix most-read story of 2019

News stories on crime and crashes are always the most-read stories on our website, but instead of rehashing those here are the Top 10 non-crime and accident stories from 2019 on thesalemnewsonline.com: