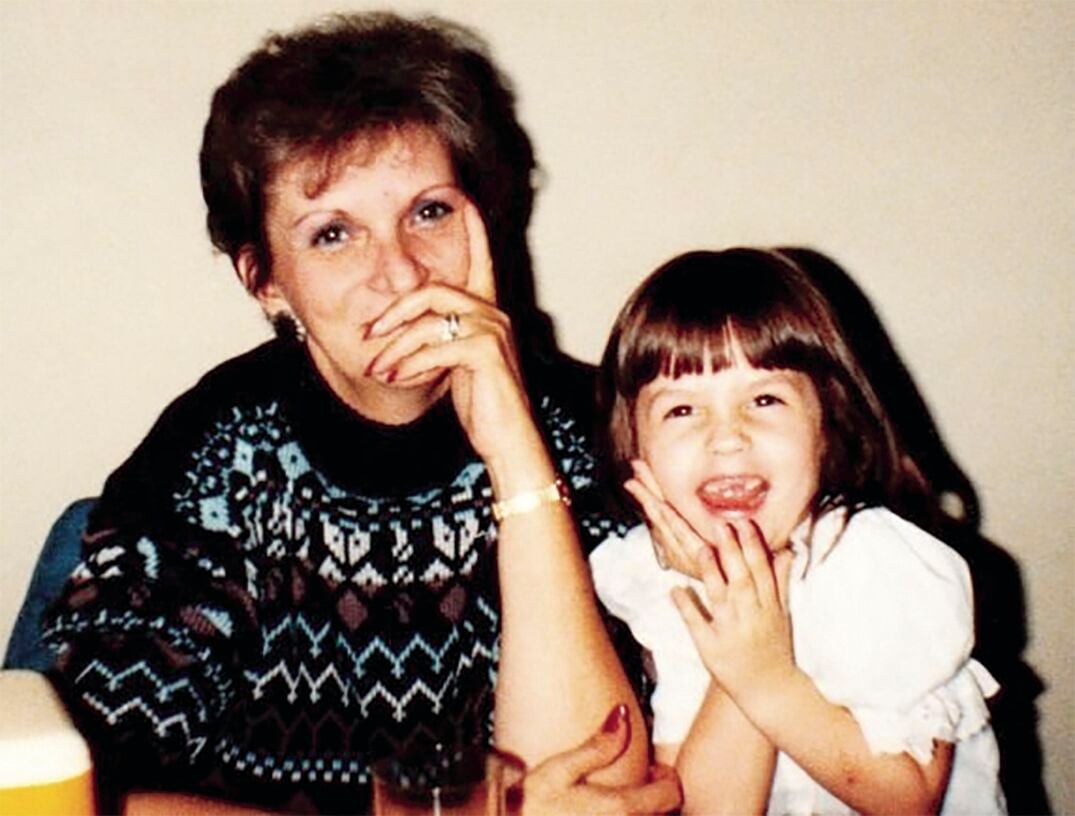 Mallory Evans with her grandmother, Alice Freeman, in 1987, not long after Freeman’s diagnoses of Signet Ring Cell Carcinoma. Her mother also had to have stomach surgery. 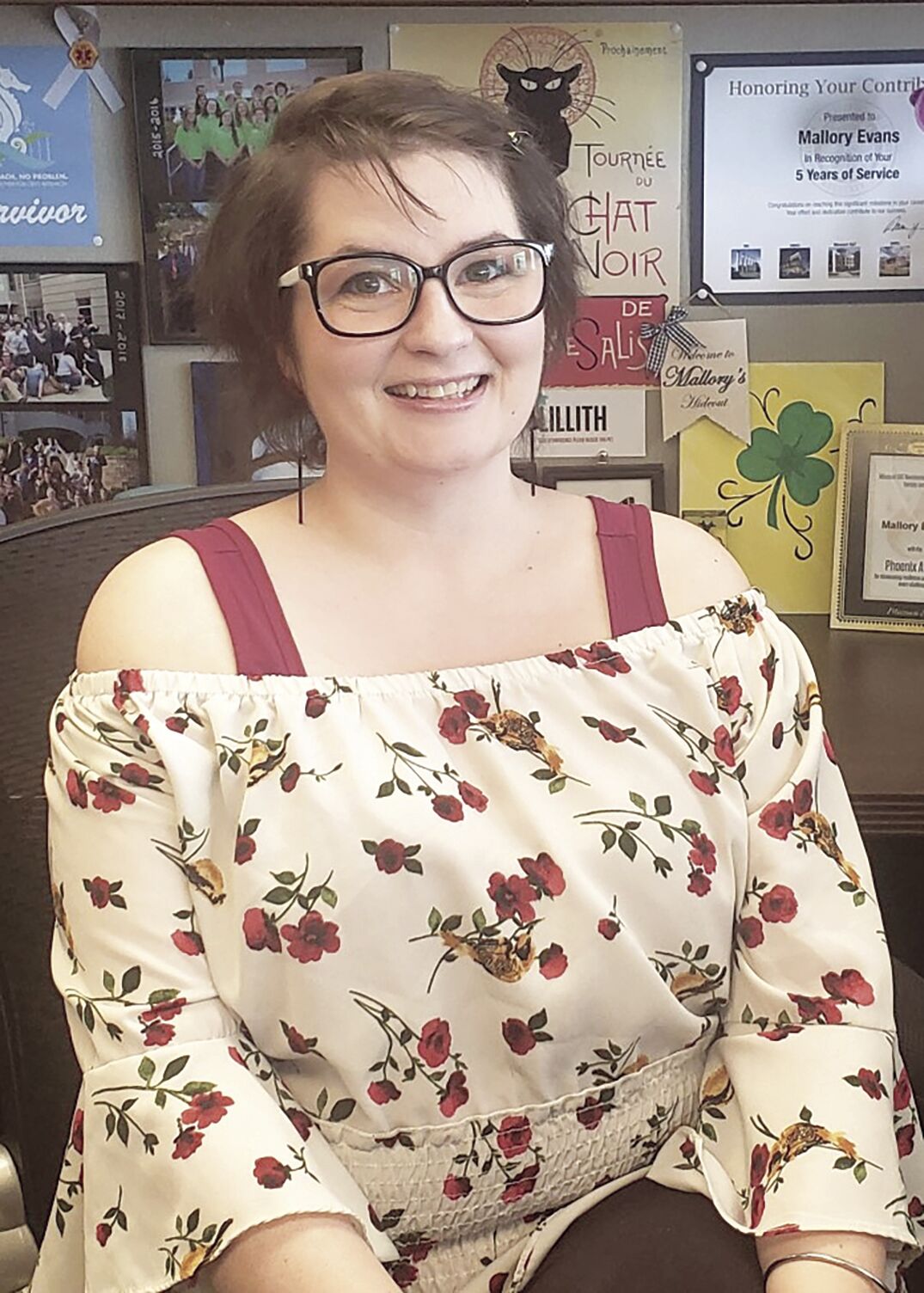 Mallory Evans works at Missouri S&T in the Residential Life Department. Evans had to have her stomach removed last year due to Signet Ring Cell Carcinoma. Hanging up behind her is a picture of a seahorse, because people who have this surgery call themselves seahorses, since that animal also does not have a stomach. 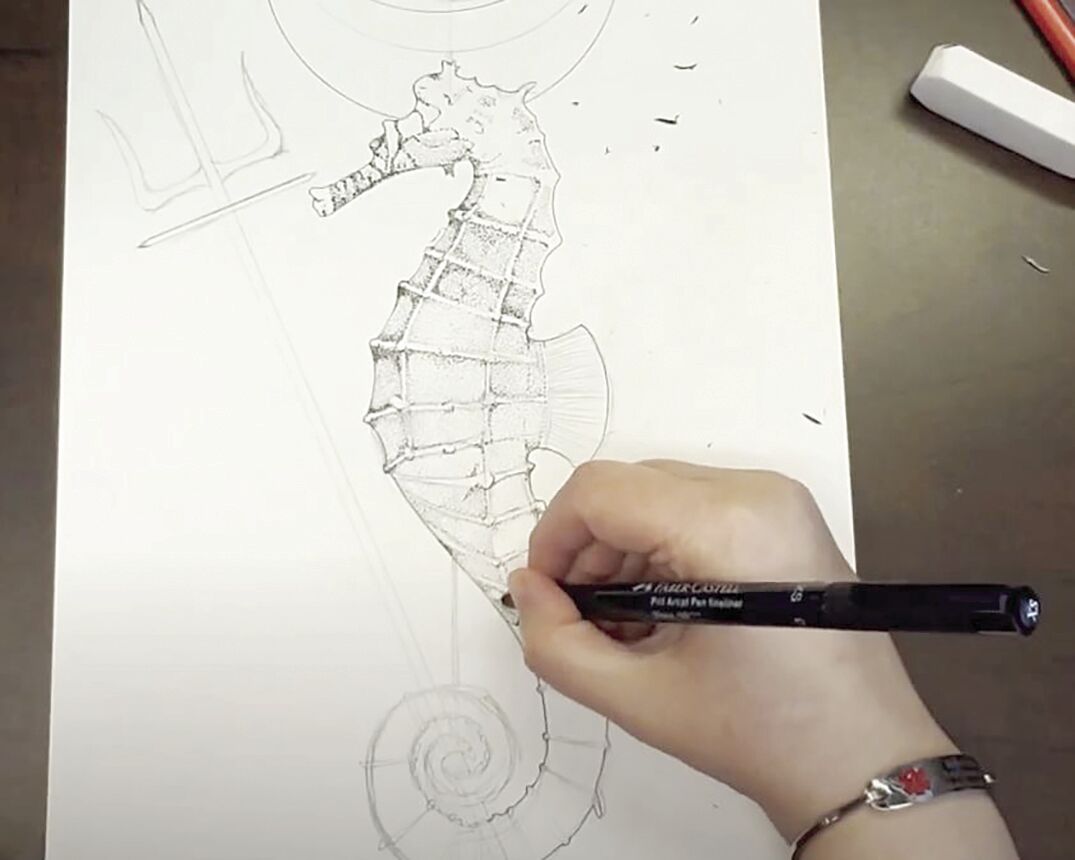 On Mallory Evans’ YouTube art channel, she has a video titled “We are without stomach.” The video shows her process of drawing a seahorse, which represents her as a person without a stomach. 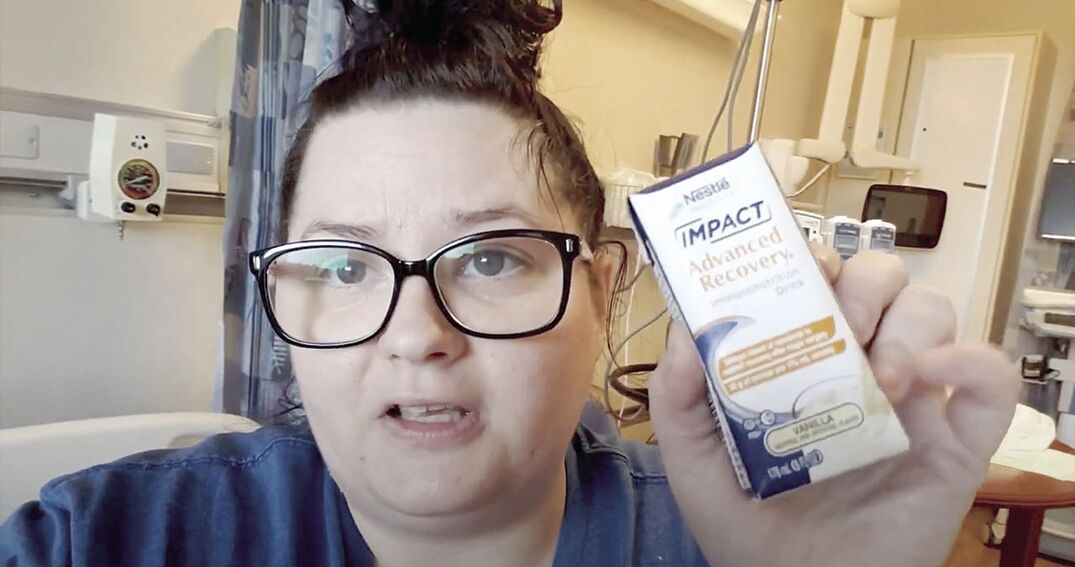 Mallory Evans also has a vlog channel on YouTube to take people through her journey of having stomach surgery. In this video, titled “My total gastrectomy is tomorrow,” she talks about the procedure and explains how she prepared for it.

Mallory Evans with her grandmother, Alice Freeman, in 1987, not long after Freeman’s diagnoses of Signet Ring Cell Carcinoma. Her mother also had to have stomach surgery.

Mallory Evans works at Missouri S&T in the Residential Life Department. Evans had to have her stomach removed last year due to Signet Ring Cell Carcinoma. Hanging up behind her is a picture of a seahorse, because people who have this surgery call themselves seahorses, since that animal also does not have a stomach.

On Mallory Evans’ YouTube art channel, she has a video titled “We are without stomach.” The video shows her process of drawing a seahorse, which represents her as a person without a stomach.

Mallory Evans also has a vlog channel on YouTube to take people through her journey of having stomach surgery. In this video, titled “My total gastrectomy is tomorrow,” she talks about the procedure and explains how she prepared for it.

Mallory Evans lives her life as a seahorse. Well, a metaphorical seahorse which is the light-hearted term people use after they’ve had to have their stomach completely removed to save their life.

Evans had to remove her stomach last year due to Signet Ring Cell Carcinoma - the same stomach cancer that has plagued her family for generations.

“I joined a support group on Facebook and learned that people without stomachs are called seahorses, because seahorses don’t have stomachs.” Evans said.

It all started in October of 2019 when she learned she was a carrier of the Hereditary Diffuse Gastric Cancer Syndrome, just like her grandmother, Grandma Freeman. Evans said Grandma Freeman died in 1989 when Evans was six years old. Grandma Freeman had just turned 45.

“It was like in the blink of an eye, she was so sick,” Evans said. “She had her stomach removed but the cancer had spread everywhere, and it was aggressive. The doctors already knew it was hereditary, but the science wasn’t far along enough yet to pinpoint a gene.”

Evan’s aunt, Micki Cummins, is the director of medical records at Texas County Memorial Hospital. In 2019, Cummins realized that the gene had been pinpointed to Hereditary Diffuse Gastric Cancer Syndrome, which was caused by the CDH1 gene mutation.

Cummins was able to talk to doctors, and a blood test to detect the gene was created. Evans said the gene is dominant, so she was told that if her mom, Len Freeman, had the gene there was a good chance she would, too.

Her mom Len found out she had the gene in October of 2019. Then on Thanksgiving, Evans found out she did, too. Two of her aunts and uncles along with many cousins also tested positive.

“At least we weren’t alone in this battle, right?” Evans said.

But how does a person function without a stomach?

According to an article on the Washington Post titled, “One Man’s Choice: Life Without a Stomach or Dying from Stomach Cancer,” a person can live without one since the body is

able to bypass the stomach’s main function of storing and breaking down food to gradually pass to the intestines.

“Absent a stomach, food consumed in small quantities can move directly from the esophagus to the small intestine,” according to the article.

Evans moved from Salem to Rolla in 2018. She works at Missouri S&T in the Residential Life Department, where she talks to parents of incoming freshmen and transfer students to help members of student staff with funds for shopping for their programs.

“I was the Miner Challenge advisor for a group of students going to North Carolina for an environmentalism study,” Evans said. “When I found out I carried the gene, I had to drop out of the program.”

Since the gene mutation and subsequent cancer are extremely rare, she and her mother applied to be part of a cancer research study at the National Institutes of Health and were accepted.

“They covered everything: All transportation including flights, tests of all kinds and the surgery itself,” Evans said.

Her and her mother flew to Washington D.C. in February of 2020, met with a genetic counselor and a nutritionist to help them transition to eating without a stomach, research nurses and meet their surgeon, Dr. Jeremy L. Davis.

Davis explained that they would have an intensive biopsy called The Bethesda Method. That is 88 biopsies of the stomach in one go.

“If cancer cells were found, the esophagus would be directly attached to the small intestine, and the stomach would come out completely. The stomach would then be mapped to find out what exactly makes the cancer so malignant and how to treat it, because it’s chemotherapy and radiation resistant,” Evans said.

“However, if it begins to spread to other tissues, using chemo and radiation could help.”

During that, COVID-19 hit. But the oncology team wanted to keep moving forward as fast as possible. Her mom’s surgery was scheduled for August 3, and hers was August 31.

“My mood began to change,” Evans said. “Anxiety manifested as anger. 2020 had been bad enough, and less than a year before, someone close to me suffered a catastrophic brain aneurysm that changed our lives forever. Now cancer? I needed a nap.”

At that point, Evans turned to the internet and found horror stories. Some people that go through the surgery experience extreme weight loss. Evans did not want to face that same dangerous fate of being too underweight.

“Some of the pictures were startling,” Evans said. “A woman in Australia said she deliberately gained 60 pounds prior to surgery and ended up losing 120 pounds post-op. I remembered how thin my grandma was after her surgery, how hard it was for her with chemo. She weighed just under 70 pounds when we lost her.”

But on the other hand, there were success stories.

“You just have to know how to take care of yourself, and our nutritionist at the NIH, Rachael Lopez, has been invaluable,” Evans said.

Then, she began preparing for the worst.

“I got my last will and testament notarized and my affairs in order, started saving money and paying bills in advance so I didn’t need to stress about finances during recovery, and made sure my FMLA paperwork was filled out,” Evans said. “My mom’s recovery had gone so well and I was sure that would be my outcome, too. She was already back to riding horses a month post-op. She could eat a whole fish filet from McDonald’s. I figured I would do just as well, being almost 20 years younger. I was mistaken.”

Evans had to fly to D.C. on her own. After the surgery, she experienced many hardships.

“When I woke up from surgery, I’d never been so nauseated in my life,” Evans said.

The nurses tried three different drugs to keep the nausea at bay, but nothing worked. Evans was vomiting a bad amount of blood. She asked her mom if that was normal, and her mom said that was not an issue for her when she got her surgery.

“The poor nurse had just started on the unit and wasn’t sure if it was normal,” Evans said.” She tried not to look panicked but she definitely was. Turns out it’s fairly normal, and it passed after a couple days.”

“The motto in the seahorse community is ‘No stomach, no problem!’ For me on that day, it was no stomach, huge problem,” she said. “I felt terrible. But every day, I was able to eat a little bit more, and the nausea was going away.”

Evans returned home on Sept. 9, but was not ready mentally. She had a breakdown and decided to live with her mom in Salem a few days. While she was there, she passed out from dehydration and collapsed, which resulted in a broken leg. She was taken to the Phelps Health Emergency Room.

“Then, my body had been through so much trauma that my hair was falling out in giant clumps. I decided to just shave it all off,” Evans said.

Her roommate took care of her during September and October. She got a call from Dr. Davis. Pathology was back, and stage 1 Signet Ring Cell Carcinoma had spread all throughout her stomach. It had not spread anywhere else, so chemo or radiation was not necessary at that time. “That was the best news I’d had in a while,” Evans said.

“My coworkers decorated my desk with a million googly eyes,” she said. “Some of the eyes are still there almost a year later.”

Even though she was in a cast and could barely eat, returning to some normalcy helped the healing process.

“Unfortunately, it turns out that popsicles are not a sufficient replacement for drinking fluids and I ended up dehydrated with a kidney stone in December,” she said. “Now I make sure I drink plenty!”

She went for a checkup on Jan. 5. Her fingernails had become brittle and she was tired all the time. Her bloodwork tattled on her: she wasn’t taking her bariatric vitamins. Nutritionist Rachael told her if she didn’t start taking the vitamins, she would have to have an IV iron infusion, so she started taking care of herself like she was supposed to. Within a week, she felt better than ever.

“I remember January 20 fondly because I woke up with a smile on my face,” she said. “I had been fighting a blah feeling since my late teens and early 20s. Nobody knew why I was throwing up all the time because the ultrasound didn’t show anything worth taking a biopsy of. That chance encounter of my aunt and uncle in the Texas County Memorial Hospital cafeteria not only saved my life, but changed it… I truly believe I wouldn’t be doing so well if it wasn’t for my fantastic oncology team.”

Evans was 240 pounds on the day of her surgery.

Weight loss has slowed for Evans, now that she is able to eat larger amounts.

“I can’t eat much in one sitting or I will get pain and nausea,” she said. “I have to chew food into oblivion so my small intestine can absorb as much nutrients as possible.”

Evans said the supportive community has really helped her.

“My family has a messenger group, I have great friends, fantastic coworkers - the list of my blessings goes on,” Evans said. “My dreams are even bigger than before, too.”

Evan’s dream is to publish a graphic novel with her friend, Kelly. She also has two YouTube pages, one to focus on her art, and the other is a vlog channel dedicated to her seahorse”journey. On her art channel, she has a video titled “We are without stomach.” The video shows her process of drawing a seahorse.

Evans said if anyone has a family history of stomach cancer, they should find out if they are a carrier of the CDH1 gene mutation. If they are, they should try to become part of the study. If someone believes they might be a carrier, talk to their physician and they can order the test.

Apply for the study at www.clinicalcenter.nih.gov/recruit/protocols/17_hereditary.html.